OOTP: Pirates Start a Three Game Series With the Cubs 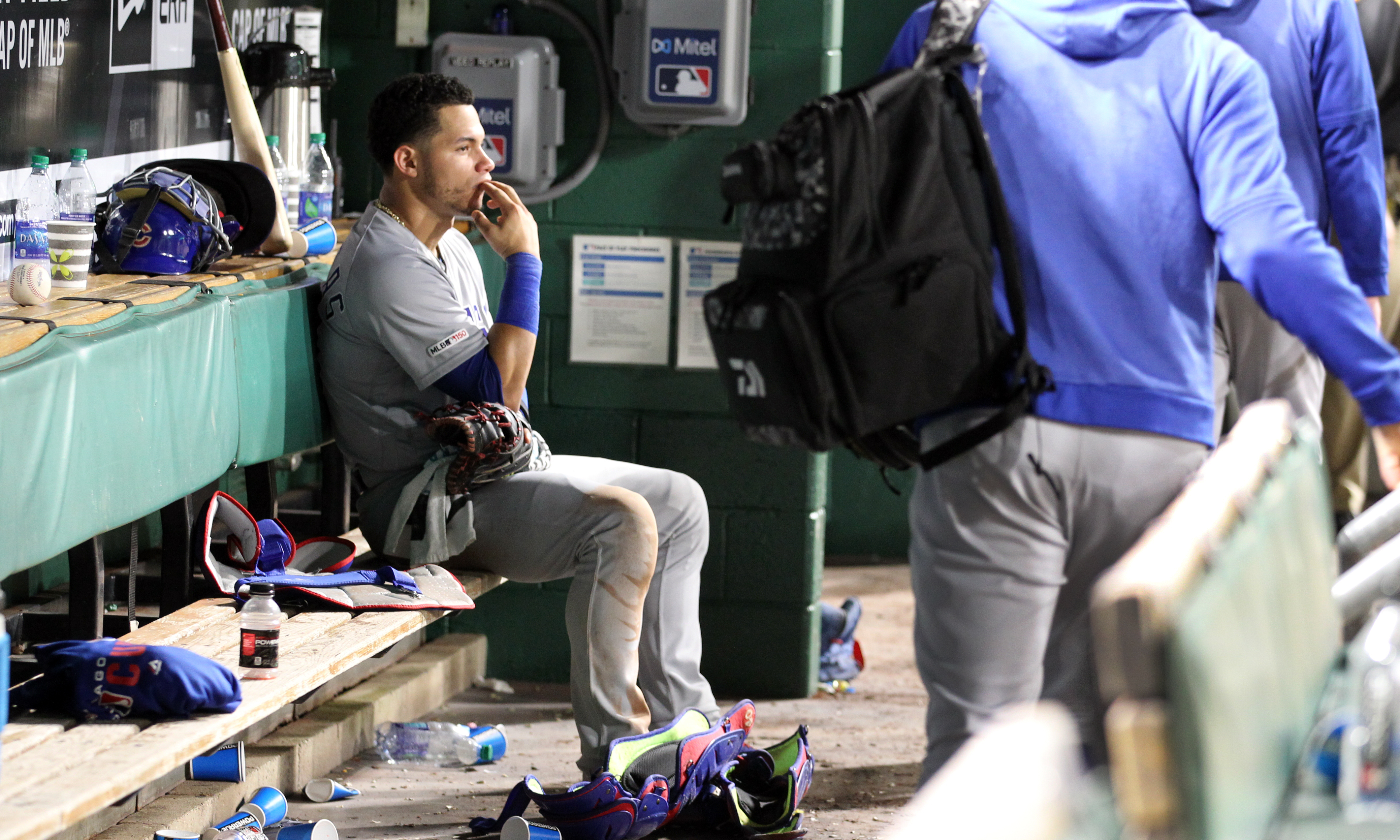 A bit of news from the simulation before we get to today’s game:

**The Pirates optioned Richard Rodriguez to Indianapolis, and have recalled Edgar Santana.

**Steven Brault has been sent to Indianapolis for a rehab assignment.

**Ji-Hwan Bae was named the South Atlantic League player of the week last week after going 13-for-27. He’s got a .343/.429/.478 line with eight stolen bases in 80 plate appearances during the young minor league season.

**A reminder that the minor league portion of the OOTP simulations will start up after PBN launches. 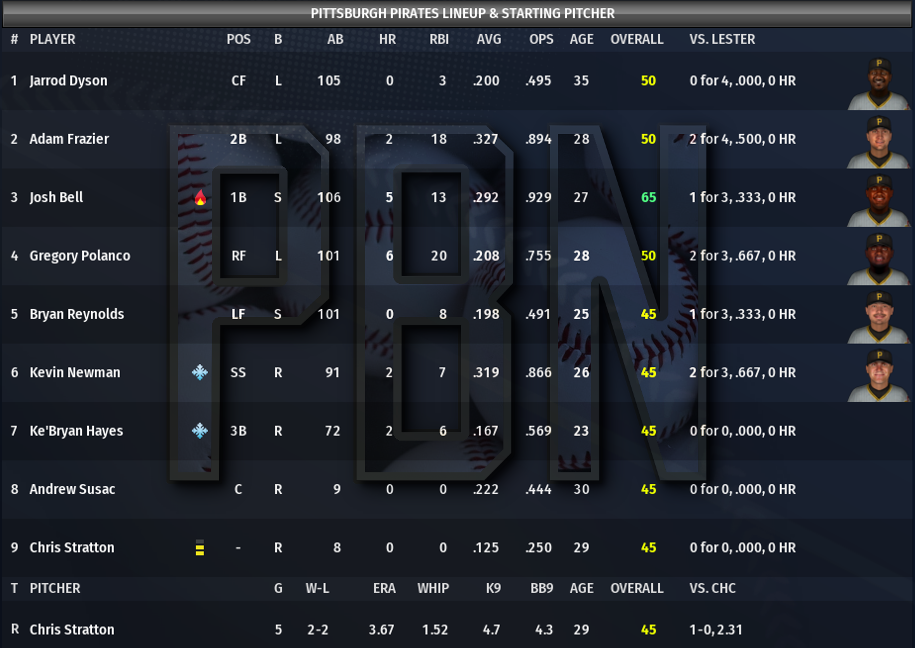 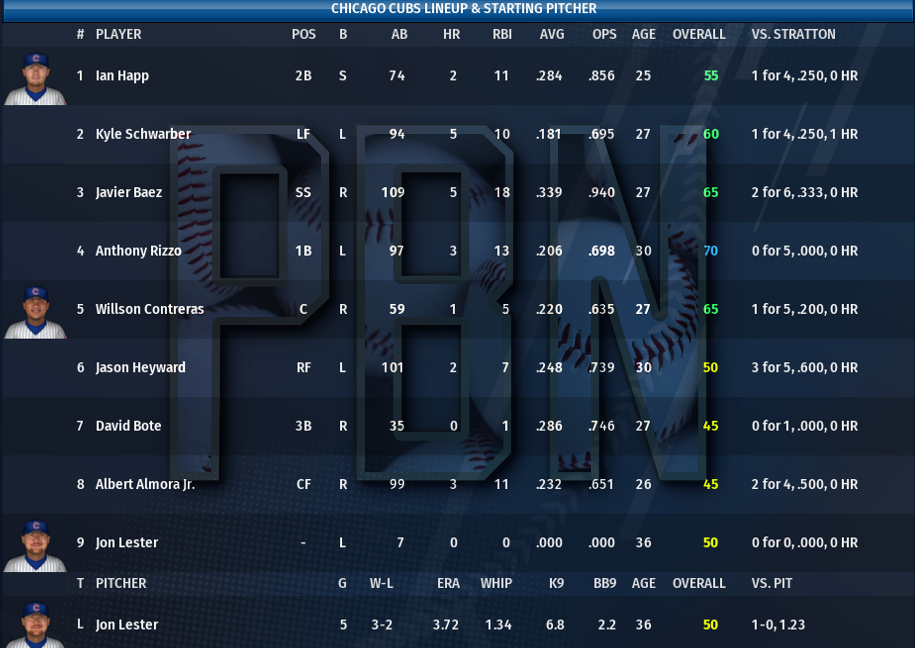 Stratton had a quick inning, getting a fly out, a ground out, and a strikeout.

Lester strikes out Reynolds to start the inning. Newman lined out to first. Hayes drew a walk. He moved to second on a balk by Lester. Susac struck out looking to end the inning.

Stratton led off the inning with a single up the middle. Dyson followed with another single up the middle, putting runners at first and second. Adam Frazier brought both runners in with a triple off the wall in left field. Josh Bell struck out on an inside pitch. Polanco flew out to deep right field, allowing Frazier to tag and score. Reynolds lined out to right.

Stratton walked Bote to start the inning. He gave up a single to Almora, moving Bote to third. Lester bunts Almora to second base with a sacrifice. Happ flies out to shallow right field, and Bote holds at third. Stratton hit Schwarber with a 1-2 fastball to load the bases. Baez pops out in the infield to end the inning.

Stratton gets Rizzo to ground out to second. Contreras hit a towering fly ball to the wall in deep center field, but it was caught by Dyson. Heyward grounded back to the mound, but a fielding error by Stratton allowed him to reach. Bote followed with an infield single on a play where Newman could only get to the ball. Almora rips a line drive down the right field line, bringing in two runs with his double. Stratton strikes out Lester to end the inning.

Dyson starts the fifth inning with a triple to the right-center gap. Frazier strikes out looking. Bell is intentionally walked. Polanco strikes out winging. Reynolds lines out to second.

Newman pops out in the infield. Hayes flies out to center. Susac draws a walk. Guillermo Heredia enters as a pinch hitter for Stratton and strikes out looking.

Left-handed pitcher Rex Brothers comes in to pitch for the Cubs. Dyson grounds out. Frazier is hit in the back with a first pitch fastball. Bell grounds into a 5-4-3 double play.

Jason Kipnis enters as a pinch hitter for Brothers. Crick gets him to ground out to short. Happ draws a walk, and the Pirates go to Keone Kela, who strikes out Schwarber and Baez to end the inning.

The Cubs turn to Trevor Megill in the eighth inning. Polanco grounds out to short. Reynolds reaches on an infield single to third. A passed ball allows Reynolds to move to second. Newman lines out to second, and Happ doubles Reynolds up to end the inning.

Kela walks Rizzo to start the inning. Contreras hits a double to the wall in left, moving Rizzo to third with no outs. Nick Burdi enters in relief as part of a double-switch. JT Riddle replaces Kevin Newman at short, batting third in the next inning.

Burdi gets a sacrifice fly against Heyward for the first out, with Rizzo scoring on the play to tie the game. Bote is intentionally walked. Almora singles to left, giving the Cubs the lead. Victor Caratini enters as a pinch hitter and draws a walk. Burdi gets a grounder to second, and Frazier comes home for the second out. Kyle Schwarber hits a two RBI single. Baez pops out to second.

Craig Kimbrel enters to close it out for the Cubs. Hayes grounds out to short. Susac strikes out looking. Riddle lines out to center. 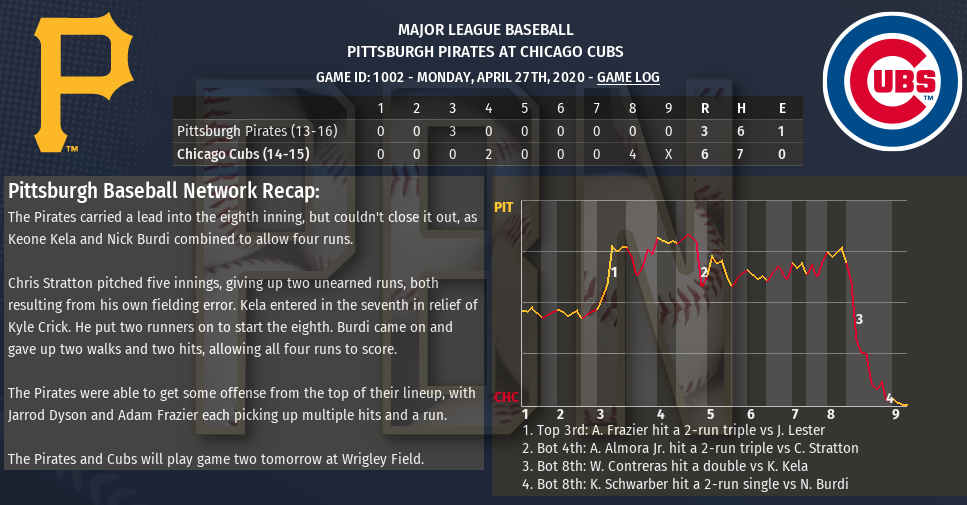 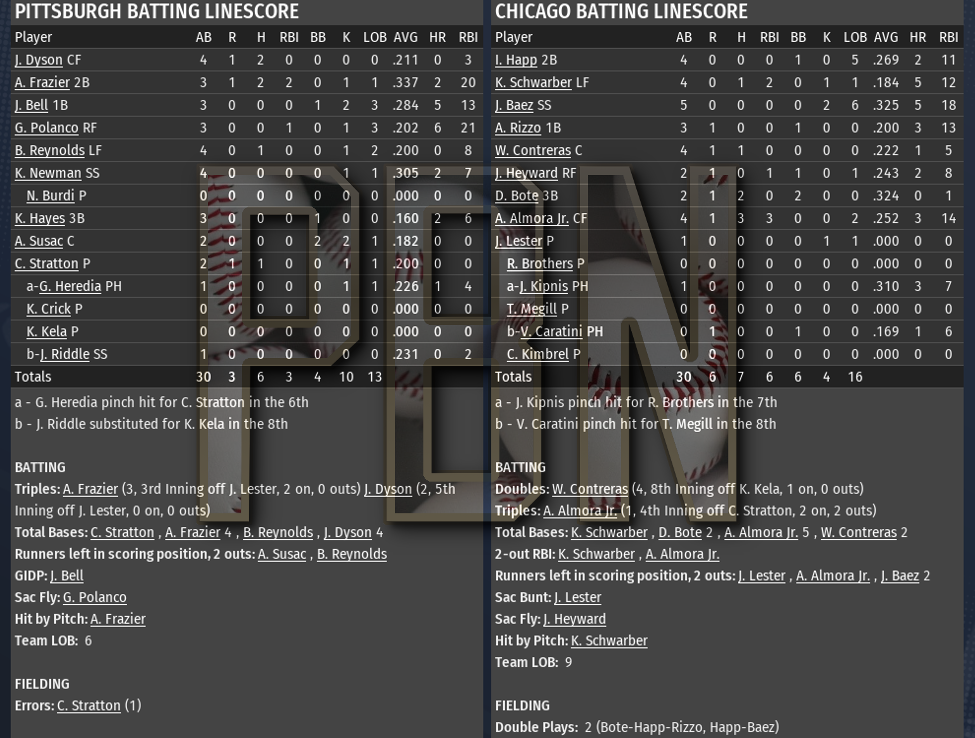 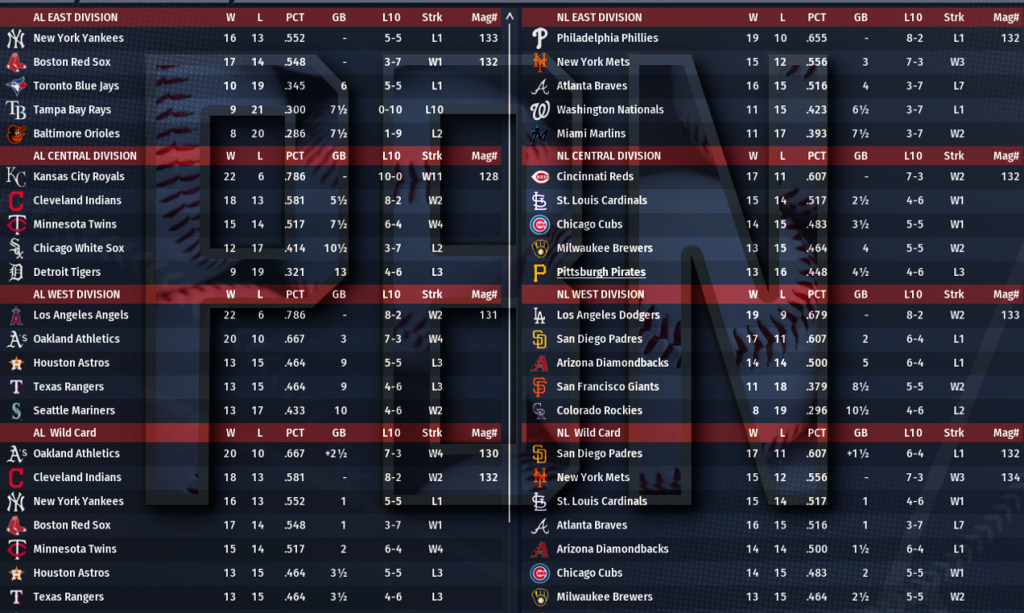 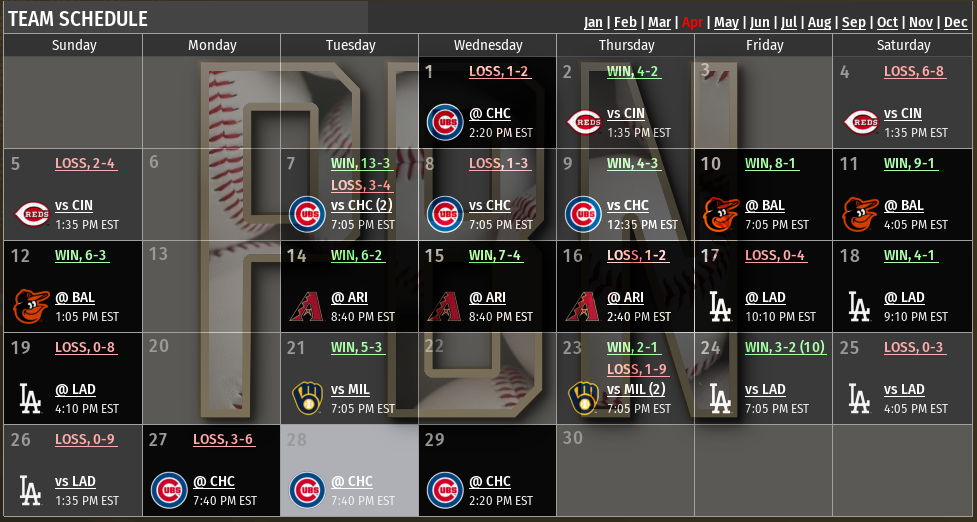