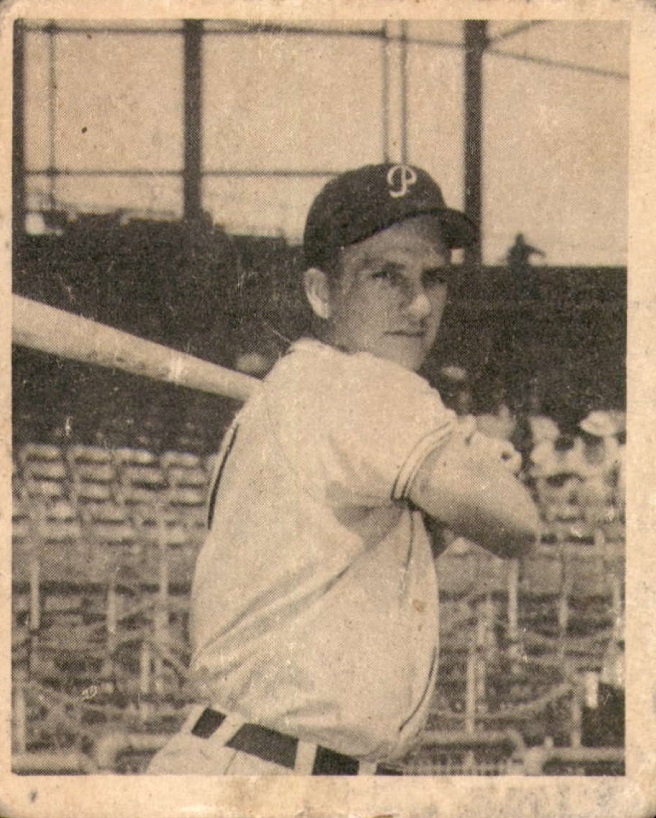 I realized while looking over the previous Card of the Day articles (all linked below) that I’ve neglected some majors stars so far. So it’s time to make it up to one of them today by looking at the 1948 Bowman card of Ralph Kiner.

This is an interesting card to look at to get into the mind of baseball card collectors. This card is referred to as one of Kiner’s rookie cards. It’s also one of his most popular cards. The term “rookie” card usually refers to a player’s first Major League card, eliminating minor league team sets from being considered rookie cards of a player. For older cards, this card is a different example of the first card not being called a rookie card. The batting stance/follow-through swing was a very popular pose for Kiner cards back in his day. If you’re looking to purchase an old card of Kiner with a bat in his hands, you have plenty of options. Trying to find a fielding pose is almost impossible (1955 Bowman). That isn’t odd, considering the fact that he was known for his bat, in particular his home run power. That point leads us to the back of the card. Just two years into his career, Kiner was being called another “Babe Ruth”, at least on this card. Seeing as he tied Johnny Mize with 51 homers, maybe calling him another Johnny Mize would have been more appropriate at this time in his career. Kiner did lead the league in homers in 1946, as this card states, but he did it while hitting a total of 23 homers. During the 1948 season, Kiner once again tied with Johnny Mize for the league lead, this time hitting 40 homers.

Kiner would go on to lead the NL in homers in each of his first seven seasons in the majors, all spent with the Pittsburgh Pirates. No other Pirates player has led the league in homers in back-to-back years. In fact, Kiner has all but four of their home run titles over the years. Willie Stargell won twice, Tommy Leach once and Pedro Alvarez once.