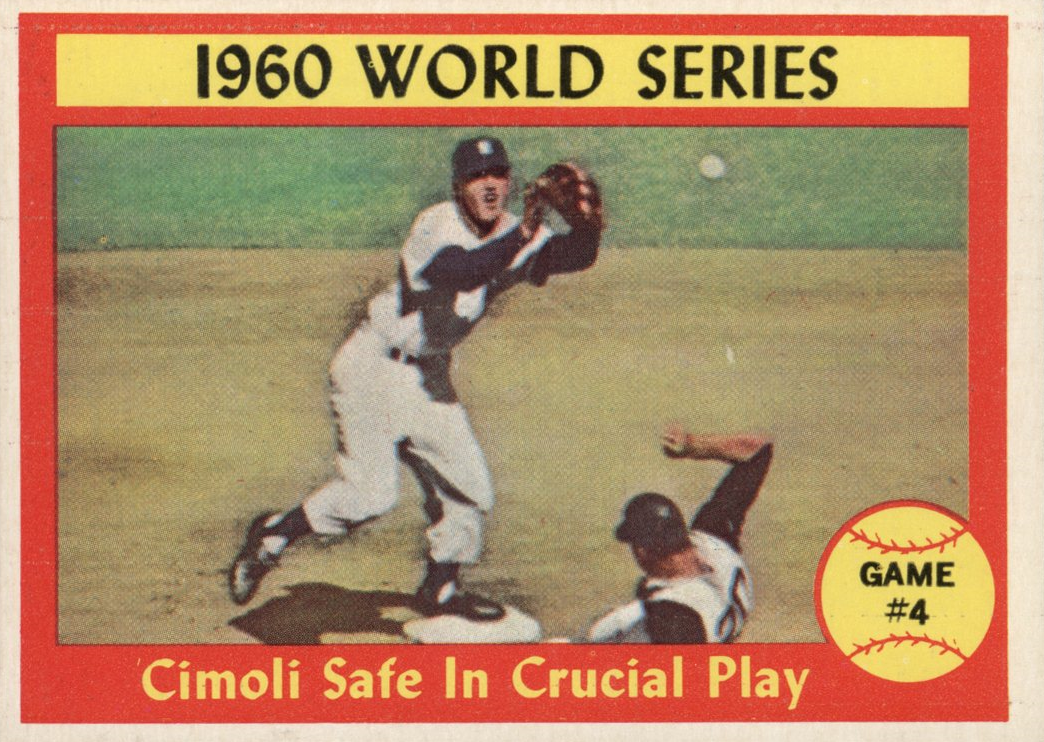 My father is a New York Yankees fan, so I told him that I would feature a Yankees card here one time. Today’s card shows Yankees shortstop Tony Kubek about to catch a ball at second base. This particular card also has Pittsburgh Pirates outfielder Gino Cimoli on it. It’s a 1961 Topps card and the front reads “Cimoli Safe on Crucial Play”.

The Pittsburgh Pirates defeated the New York Yankees in seven games during the 1960 World Series. For the 1961 Topps set, they produced a “1960 World Series” subset, consisting of eight cards. The first seven cards showed a highlight from each of the seven games, while card #8 in the set showed the Pirates celebrating their victory in the locker room.

This particular card shows a close play at second base in the fifth inning of game four on October 9th at Yankees Stadium. Cimoli was safe on an infield hit by Smoky Burgess that was scored a fielder’s choice. Cimoli had singled to start the inning. After two pop outs in the infield, Vern Law and Bill Virdon had back-to-back hits that scored three runs. Those would be the only runs scored by the Pirates, but the Yankees could only push two runners across the plate. The 3-2 victory tied the series up 2-2.

Cimoli is rather well known among older Pirates fans (he won’t ever be featured in our Obscure Pittsburgh Pirates series), but he wasn’t with the team long. He played 101 games during the 1960 season after being acquired in a winter trade with the St Louis Cardinals. He batted .267 with no homers and 28 RBIs during the season, then played all seven games of the World Series and batted .250 with four runs scored and an RBI. He played 21 games during the first two months of the 1961 season before he was traded to the Milwaukee Braves for Johnny Logan. Cimoli played a total of ten seasons in the majors and saw time with seven different teams. The back has a breakdown of the scoring plays for both teams, as well as the pitchers used during the game. You’ll see that the card gives Burgess credit for a single, but the official scorer ruled that the play was a fielder’s choice.

You may have noticed that the card would be considered a horizontal pose in baseball card terms, but the back was printed as though the picture on the front was the standard baseball card setup.