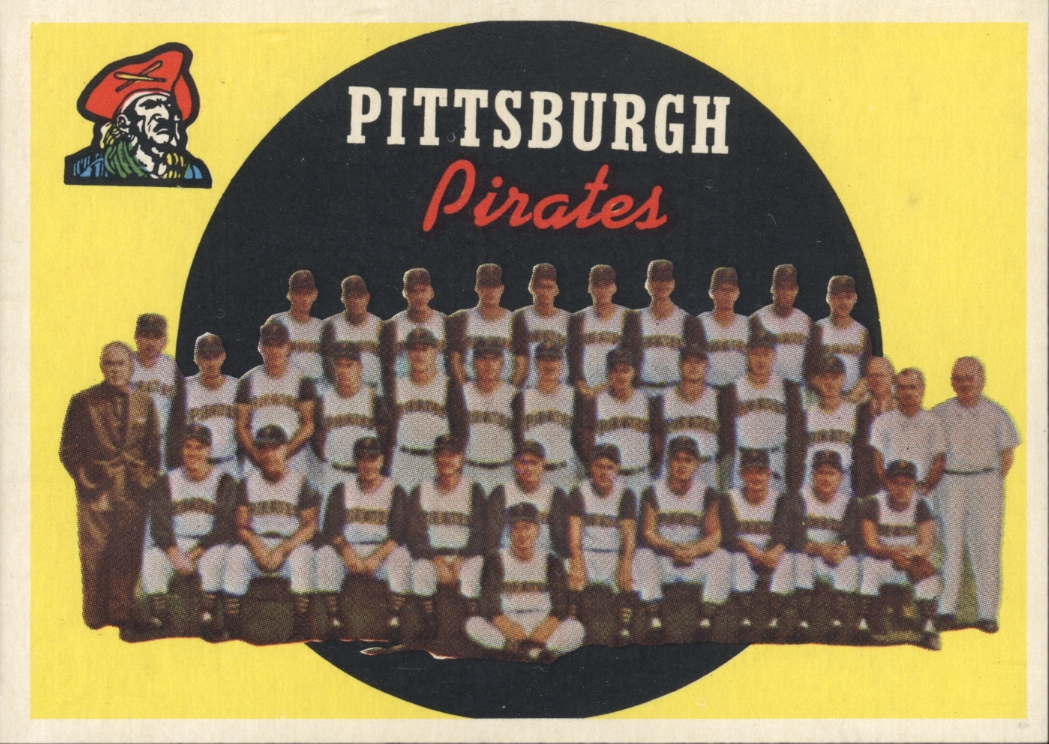 Recently we looked at an early July game in 1923 between the Pittsburgh Pirates and New York Yankees. You don’t have to be a baseball historian to see something odd about those two teams playing each other in July. It was an in-season exhibition game at Forbes Field.

Today’s game is something similar between the Pirates and the Kansas City Athletics in July of 1959. The Athletics were in the American League back then, just like they are now, though they’re now located quite a few states to the west. So this was obviously another in-season exhibition contest, but it wasn’t played in Pittsburgh or Kansas City.

Since 1939, there has been a Hall of Fame game in Cooperstown almost every year, which usually occurred mid-season and during the Hall of Fame ceremonies. Before 2009, it featured two Major League teams. Except for a few canceled games due to weather, as well as two years during WWII, there was a game for 69 years straight. The Pittsburgh Pirates played in five of those games over the years, with the first occurring in 1949 against the Washington Senators. Ten years later, they played their second game and took on the Kansas City Athletics.

The Pirates were 49-44, and four games out of first place at the time of the Hall of Fame game, which occurred on a Monday. On Sunday, they defeated the San Francisco Giants 3-2 at Forbes Field. On Tuesday, they lost 4-2 to the Philadelphia Phillies at Forbes Field. In between they traveled to and from upstate New York for the Hall of Fame game that was witnessed by a then record crowd of 8,714 fans.

The Pirates sent 24-year-old Ron Blackburn to the mound to start the game. He was in his second season in the majors, and unknowingly at the time, he was just eight days away from his final big league game. His performance in the Hall of Fame game probably didn’t help his case to stay in the majors.

Blackburn got some early help from Roberto Clemente, when he cut down a runner at home plate in the second inning. Blackburn gave up a fourth inning home run to Joe DeMaestri, then Harry Chiti hit a three-run homer in the sixth inning to cut Kansas City’s deficit to one run. Blackburn then fell apart, walking four straight batters to tie the score. What happened next likely kept the Pirates from losing this game.

With the bases loaded and Blackburn unable to throw strikes, the skies opened up and the game went into a rain delay. After waiting a half hour, the game was called a 5-5 tie with two outs in the top of the sixth. Blackburn gave up five hits and walked a total of seven batters. He never went more than five innings during his big league career and his high for walks was three batters. In fact, he had just one game (out of 26) with more than one walk in 1959. He walked two batters on April 27th, and even in that game, one of the walks was intentional.

The Pirates scored their five runs on nine hits, with Bill Mazeroski and Bob Skinner each contributing three hits. Mazeroski hit two home runs that day and drove in three runs. Those homers by Mazeroski were the only home runs he hit over a four-month stretch from mid-May to mid-September in 1959. The Pirates also got a home run from Bill Virdon, who hit the game-winning home run in the 3-2 win over the Giants the day before the Hall of Fame game. Not related to the game, there were a pair of newsworthy items from that same day. The first was sad news, as 23-year-old Freddie Hancock died during a week-long tryout period with the Pirates Triple-A team.

The other news was that Dick Groat was awestruck when he got to meet Ty Cobb and shake hands with him. Groat had a good reason for his reaction. He said that Cobb came down to the dugout to find him and then Cobb said that Groat was a good opposite field hitter and the shortstop from Duke. Groat said that he was “bowled over” knowing that Cobb knew those details about him.

The Hall of Fame welcomed Brooklyn slugger Zack Wheat to the Hall of Fame that weekend in 1959. Pie Traynor was one of the returning Hall of Famers there to watch the ceremony, as was Frankie Frisch, who managed the 1940-46 Pirates.