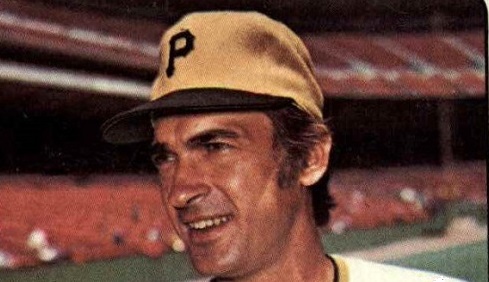 This is part nine in our Obscure Pittsburgh Pirates series, and I wanted to find someone more recent for this one, meaning a player from the last 50 years. As I’ve pointed out before, the more recent you get, the shorter career they had with the Pirates. If they were around in the last 50 years and they played in Pittsburgh for a while, then most diehard fans of the team either remember them or they have heard of them plenty of times. Today’s player might be remembered by some of the older fans, but only for a handful of at-bats that went much different than the rest of his career.

During the 1974 playoffs, an unlikely bat emerged for the Pittsburgh Pirates. Paul Popovich didn’t start any of the four games during the series, which the Pirates lost 3-1 to the Los Angeles Dodgers. However, he went 3-for-5 with a run scored, while coming off of the bench late in games one, two and four. The Pirates used the veteran infielder as a pinch-hitter numerous times in 1974, but he batted .169 with no homers in 184 pinch-hit at-bats during his 11-year career. So no one was expecting him to be a bright spot during the 1974 NLCS. Popovich was a deep bench player for the Pirates. His first start didn’t happen until May 5th. He didn’t start again until 22 days later, though he ended up starting both games of a doubleheader that day at second base. Over the final four months, his name was in the starting lineup just six more times. He pinch-hit 43 times and batted .237 with a double and a triple. He gave an indicator of his playoff success in September, though it was probably lost in his sporadic playing time.

In 14 games in September, Popovich had an .875 OPS. He came off of the bench in all of those games. He had a stretch of going 5-for-11 as a pinch-hitter during a 3 1/2 week stretch to end September. It appears that he was getting used to the role at the right time and it carried over into the playoffs.

Unfortunately for Popovich, it didn’t carry over into the 1975 season. He went 3-for-15 with three singles and two walks as a pinch-hitter before the Pirates released him in July. He didn’t do any better when he got the occasional start. Popovich batted .200 as a starter and .200 as a substitute in 1975. His final numbers with the Pirates showed a .211/.261/.252 slash line in 84 games.

His release from the Pirates marked the end of his big league career. He was a solid defensive player over 11 seasons, playing mostly at second base, though he saw decent time at shortstop and a bit of third base. When he did get in the field for the Pirates, all of his starts were at second base. He played 19 games at shortstop, but not one of those appearances was a start. He made a total of three errors in 103 chances while in Pittsburgh.

Popovich’s best big league season came in 1968 for the Los Angeles Dodgers when he had a 1.0 WAR and played 134 games. It was the only season in which he reached the 100-game mark. Throughout his career, his glove was usual better than average, while the light batting skills dropped his overall value below replacement level. He wasn’t much of a runner either, going 4-for-14 in stolen bases during his big league career. Three of those steals came during the 1973 season.

Pirates fans didn’t mind seeing him in an opposing uniform, which might be a more memorable part of his career for older Pittsburgh fans, since the 1974 NLCS didn’t go so well. He batted .187, with no homers in 74 games against the Pirates, and was even worse at Forbes Field, where he had a .175 average.

Let’s see how he does the rest of the season.…

Diego Castillo is Hitting a…

Seems to be a problem with a few Bucco's. Hitting…