The following is part of our simulation of the 2020 Pittsburgh Pirates season, using Out of the Park Baseball (OOTP). We simulate the season each day, as it was originally scheduled, and with no input from any of us, all to give you a Pirates team to follow this year.

On May 5th, OOTP simulated the 2020 MLB Draft, giving a mock draft of what the June 10th draft could look like on the game. We were waiting to find out how long the real draft would be before posting the results of their draft. On Friday we heard reports that the draft would be five rounds this year. With that in mind, we can look at the OOTP results for the Pittsburgh Pirates.

With the seventh overall pick, the Pirates took Nick Bitsko in the first round. He was just covered here on Saturday, so if you’re reading this article about the draft, you’re either very familiar with him, or you’ll want to check that link (with videos) about the 17-year-old right-handed pitcher from Central Bucks East HS in Pennsylvania. He’s rated as a top ten pick by most. 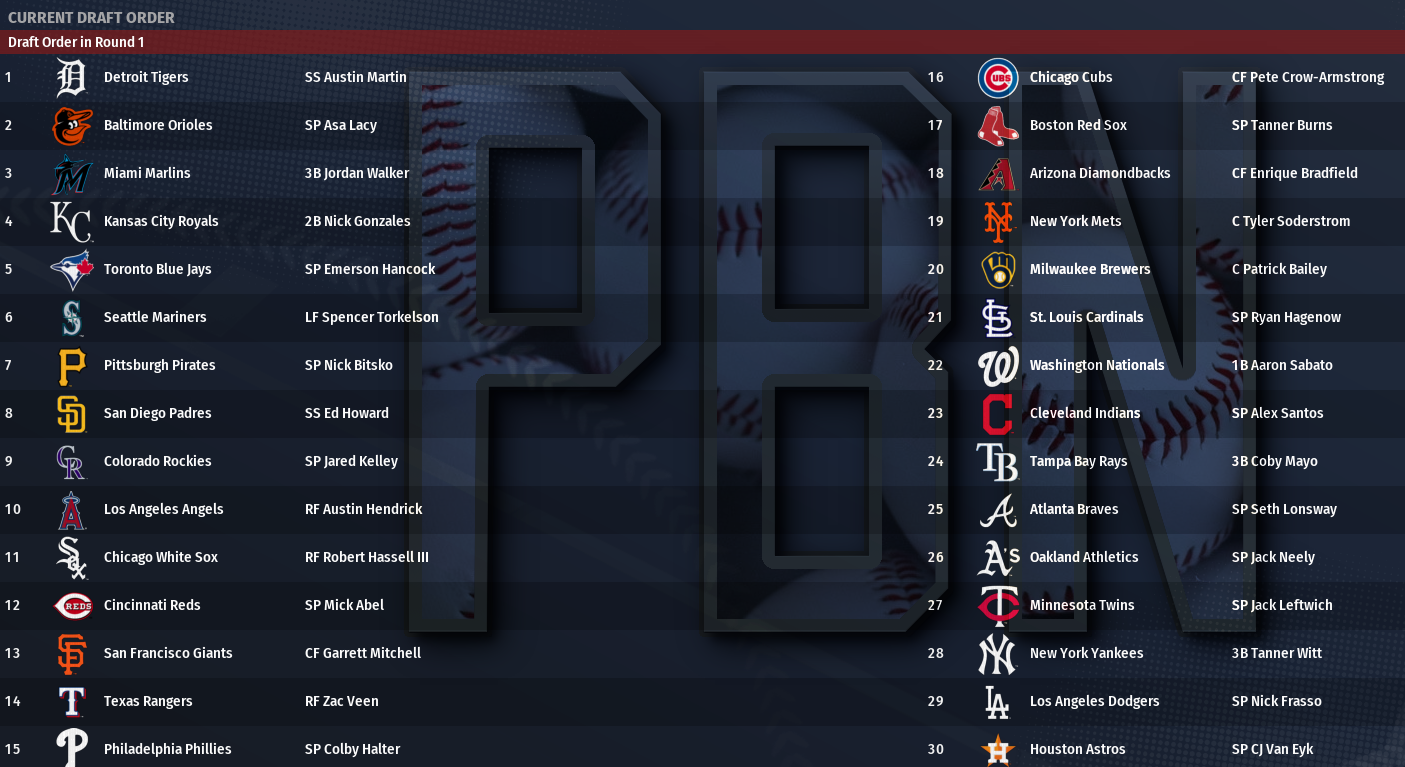 The Pirates passed on the local kid, prep outfielder Austin Hendrick, who ended up going off the board three picks later.

We ran into problems at this point because the draft order has changed since OOTP put together the program, although they had a difference from the start. The Pirates have the 31st overall pick in real life. In the simulation, they have the 33rd overall pick. For some reason, they are flipped in the competitive balance round with the Royals. The Astros also lost their first round pick because of a garbage can, but the game still has them making a selection. There’s also another problem coming up that I will get to after the second round pick.

Instead of deciding whether to use the game results or use the current draft order instead, I’m doing both from here on out. The “OOTP” results below will mark who the game chose for the Pirates, while the numbered picks show which players were selected in the draft spots the Pirates actually own.

Fulton is a huge (6’6″, 225) left-handed prep pitcher from Oklahoma, with a projectable frame and a fastball that gets into the low-90s. He also had Tommy John surgery and is currently recovering. Baseball America ranks him 52nd.

Smith is a catcher, which would appeal to the Pirates and fans, since they have no legit prospects at the position. However, this seems like a computer glitch because he was never ranked high and BA currently has him ranked 409th in this class. He also didn’t play any catcher this year, making 15 starts in the infield before played stopped. He was only hitting .167 as well.

The Fulton pick is much more legit and feels like a Pirates pick, though the new front office might not agree.

Mace is the right-handed college version of Fulton. He’s actually a teammate of Brady Smith at Florida. He’s a huge starting pitcher, who throws a lot of strikes, though he doesn’t miss a ton of bats. He’s ranked 76th by BA, so he’s not a reach, but it’s not a high upside pick either. He’s a safe pick, with a high ceiling.

Hurter fits in the Brady Smith role as a very unlikely pick in this spot in real life. He’s ranked 252nd overall, a left-handed pitcher out of Georgia Tech and he’s HUGE as well, standing 6’6″, 252 pounds. He’s also like Fulton in that he’s recovering from TJ surgery. I guess if you had to pick a year to select TJ surgery pitchers, 2020 would be the one. Hurter might actually be someone the Pirates consider in the fifth round in the real draft because he was making big strides right before the injury.

Here’s the other issue with the draft. The Red Sox recently lost their second round pick for sign stealing, so while the Pirates selected 81st overall in the OOTP draft, their real spot is two picks higher.

Harrison would be a welcomed pick in this spot. He’s a prep lefty who is considered to be a polished pitcher. He reaches 94 MPH, has a slider/slurve with a lot of movement and a solid changeup. Athletic and throws strikes.

McKenzie isn’t an option here in real life. He’s a shortstop at Fordham, who has a lot of speed and some pop in his bat. He’s not a top 500 prospect though. Up to this point, the OOTP picks by the Pirates are obviously much better than using the correct number.

Wilks is a 19-year-old prep outfielder from Mississippi, who would be a possible pick here. He’s a lefty hitting power hitter with nice contact rates despite a big swing. He’s an above average runner, with average corner outfield defense and an average arm.

Tepper is a right-handed prep pitcher from South Carolina, who BA ranked 291st in their last update. He’s 6’2″, 180 pounds. They don’t have a scouting report, but according to reports I found, Tepper sits low-90s and has touched 95 MPH, with a curve that gets great results and he’s been working on a changeup. The curve has plus potential and he has excellent arm speed, so there could be more velocity.

Neither player would be a bad pick in the fourth round (or fifth), so they’re names to keep in the back of your mind.

OOTP was doing much better than the numbered picks until this selection. Gelof isn’t a top 500 prospect. He’s a high school shortstop from Delaware, with a commitment to UVA. He has pitched some and has an above average arm. He has decent speed, an athletic frame with room to fill out and good bat speed. He would be an interesting over-slot pick on day three under normal circumstances, but not a fifth round pick in a year where all of the picks are so crucial.

Smith is a draft-eligible sophomore, who attends Vanderbilt and is ranked as a possible 4th/5th round pick. He sits low-90s, with average control, an average slider that occasionally plays up, and a changeup. He’s a 6’1″, 200 pound right-hander, who has shown better stuff in shorter outings.

If you go by the best picks here in each round, you would have a decent draft class:

We will post the “actual” OOTP draft results when they occur in June and then see what changed from this point forward.