The Pirates will look to avoid a sweep against the Phillies today, with Chris Stratton taking the mound. Prior to the game, there were a few transactions in the OOTP universe.

Derek Holland was shut down for the season with a partially torn UCL in Indianapolis. Holland pitched 16.2 innings in Triple-A, with a 6.48 ERA.

Blake Weiman and Brandon Waddell were called up to the majors, with the Pirates needing bullpen help. Kyle Crick was sent to Triple-A, and Clay Holmes was designated for assignment and placed on waivers. 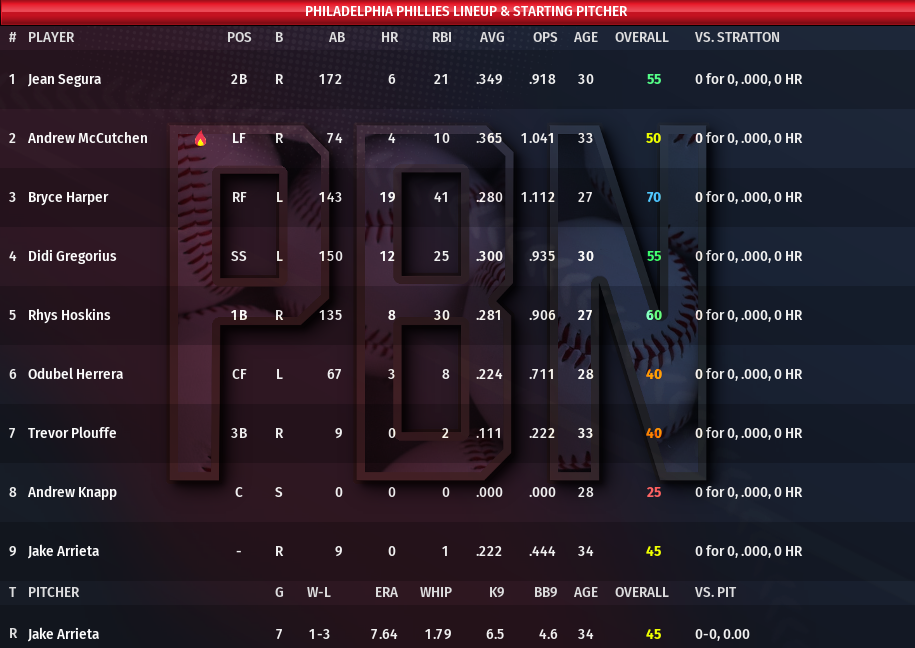 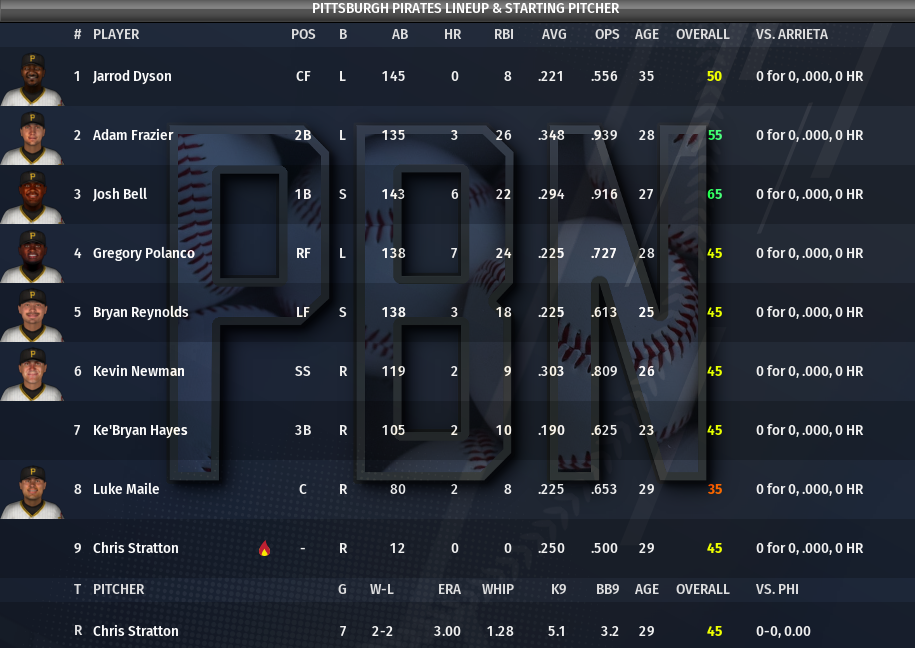 Dyson leads off with a single to left. Frazier singles up the middle and Dyson is held at second. Bell grounds into a 1-4 fielder’s choice. Polanco hits a sacrifice fly to right field, scoring Dyson. Reynolds draws a walk. Newman grounds out to second.

Stratton strikes out Hoskins to start the second. Herrera singles to left. Plouffe strikes out swinging. Knapp grounds out back to the mound.

Hayes pops out to the first baseman in foul territory. Maile flies out to center. Stratton lines out to right.

Dyson is hit with a 1-0 pitch. Frazier singles to left, and Dyson stops at second. Bell singles to center, scoring Dyson. Polanco pops out to short. Reynolds flies out to right. Newman strikes out swinging.

Harper flies out to center. Gregorius grounds out to first. Stratton gets a strikeout to end the inning.

Arrieta sets down the 7-8-9 hitters in order.

Hoskins flies out to right. Plouffe flies out to center. Knapp singles to left. Arrieta grounds into a 6-4 fielder’s choice.

Dyson flies out to left. Frazier draws a walk. Bell singles to center. Polanco singles to left, scoring Frazier from second. Reynolds flies out to deep center field and Bell takes third on the tag. Newman singles through the right side of the infield to bring in another run. Hayes singles through the left side, bringing in a run. Reggie McClain comes in to pitch for the Phillies and strikes out Maile to end the inning.

Segura flies out to center. McCutchen singles to left. Harper flies out to right-center. Gregorius grounds out to second.

Stratton grounds out to third. Dyson singles on a line drive to right-center. Frazier grounds into a 4-6-3 double play.

Hosins singles to left. Herrera draws a four pitch walk. Plouffe doubles to the notch, scoring a run. Blake Weiman comes in to pitch for the Pirates. Knapp strikes out. Mikie Mahtook flies out to center, bringing in the runner from third. Segura grounds out back to the mound.

Deolis Guerra comes on to pitch for the Phillies. Bell flies out to left. Polanco strikes out swinging. Reynolds strikes out looking.

McCutchen walks to lead off the eighth inning. Harper singles up the middle and McCutchen takes second. Gregorius flies out to left. Nick Burdi comes in to pitch and gets Hoskins to fly out to center. Herrera strikes out swinging.

Newman leads off the bottom of the eighth with a walk. Left-handed pitcher Jarlin Garcia comes in to pitch. Hayes draws a walk on a 3-2 pitch. Maile strikes out. Burdi sacrifices the runners up 90 feet with a bunt. Dyson draws a walk to load the bases. Frazier grounds out back to the mound.

Plouffe grounds out to third. Knapp draws a walk. J.T. Realmuto comes in to pinch hit and lines out to first. Keone Kela comes in for the vulture save and gets a groundout to short to end the game. 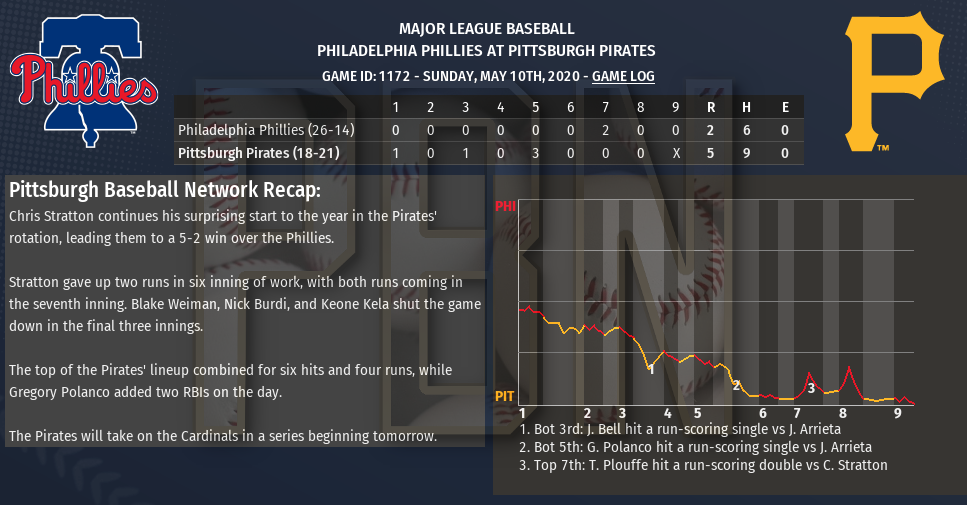 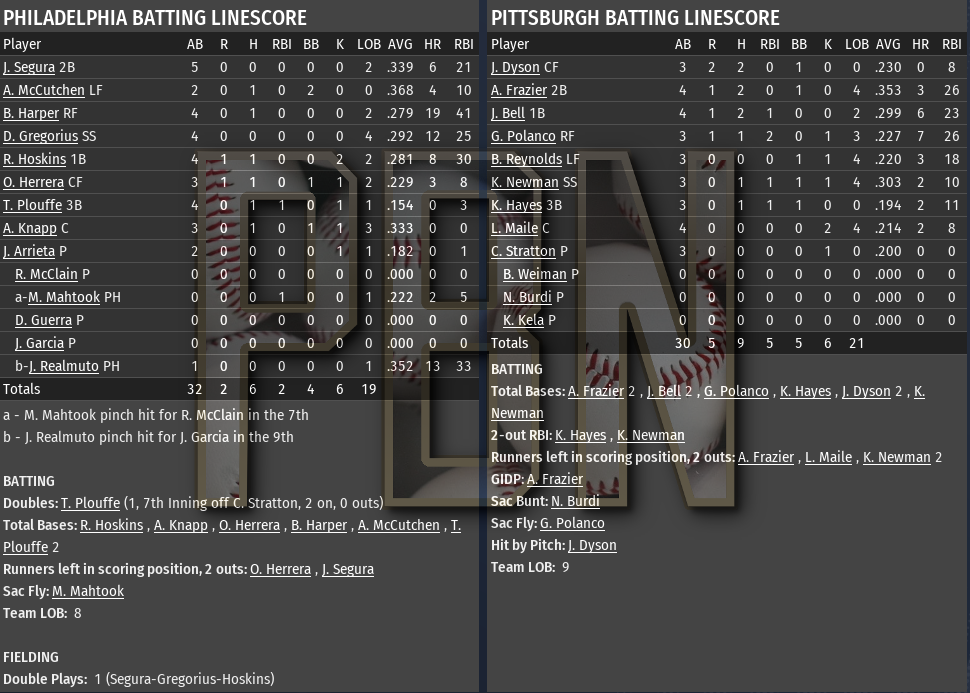 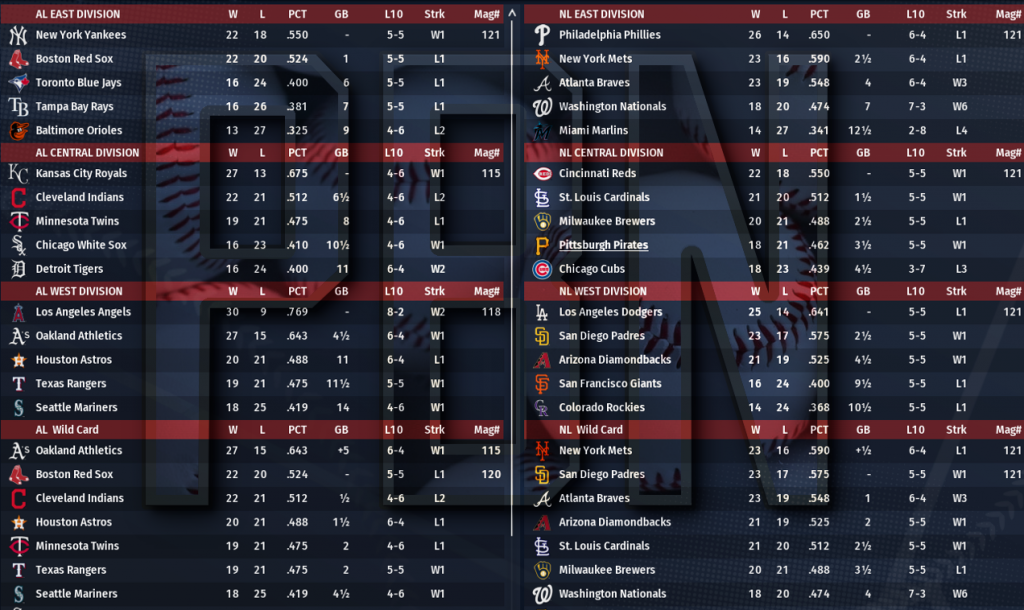 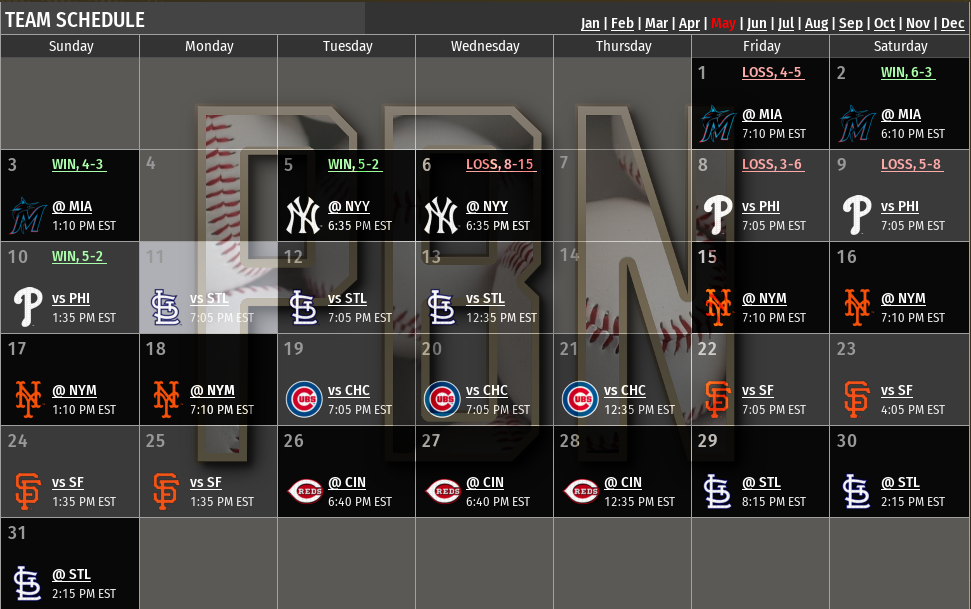