There’s been a bunch of little news items today, including some recent news from the Pittsburgh Pirates. I’ll include the links to the items here.

The Pirates announced some furloughs and pay cuts related to the work stoppage. We are probably going to hear more of these from other teams, with most of them promising earlier in May to cover employees through June 1st. The Angels just made HUGE cuts to their baseball ops staff, and the Cubs have also made recent money-saving cuts. There could be more, but those are the two I saw today. Here’s the message from team president Travis Williams: 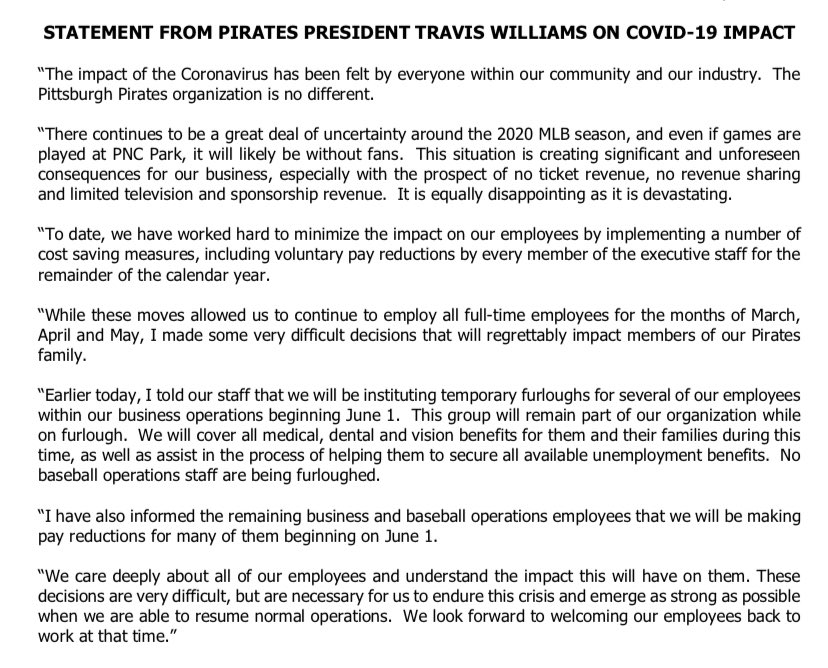 The pay cuts on the baseball operations side range between 5-25% and are for employees who make more than $50,000.

The Pittsburgh Pirates have informed employees making over $50,000 that they will implement 5-25 percent paycuts beginning on June 1, according to sources with direct knowledge. There are furloughs on business side.

Ken Rosenthal provided some good news on the baseball ops side.

#Pirates are holding off on furloughs in baseball operations for forseeable future, sources tell The Athletic. Team institituting pay cuts starting at 5 percent, and also will furlough some in business operations. But current plan is to retain and build staff for ‘21 and beyond.

As far as the work stoppage goes, here are some tweets from Jon Heyman and Jeff Passan about the situation.

The Major League Baseball Players Association intends to respond to MLB’s 67-page health-and-safety operations draft today, an MLBPA official tells ESPN. The union declined to publicly offer specifics on the substance of the response but said in a statement: pic.twitter.com/BZaMQTvtwa

Passan said in a second tweet that “The MLBPA’s response should represent a step forward in negotiations with the league on striking a broader deal for baseball to return. While there remains a chasm with regards to pay, the shared interest of health and safety should provide groundwork for further discussions.”

Players are expecting MLB’s economic proposal by early next week. If it’s for a 50-50 revenue sharing split that’s all but sure to be shot down by players. Meanwhile, MLB seems equally opposed to paying prorated player salaries over the proposed 82 games. Compromising needed.

Ken Rosenthal has an article on the Athletic about how baseball execs would handle the proposed safety changes.

Joel Sherman says that the MLBPA sent their response to the proposal. Here are his updates:

and this from talks with players and agents

In conversations with players and agents heard players were hoping — among many other things — to get restrictions lifted on showering at stadiums, especially b4 going on road. And bans on items such as hydrotherapy pools that help with preparation/recovery.

And this tweet about testing often. This was talked about from the start and shouldn’t be an issue. MLB wanted to start play when their frequent testing wouldn’t affect the public’s ability to test.

Players also want test volume increased. Daily would be best to allow even greater comfort/fewer restrictions within clubhouse/ballpark. Question will be if MLB can get enough tests without depleting from what is publicly needed to make that happen.