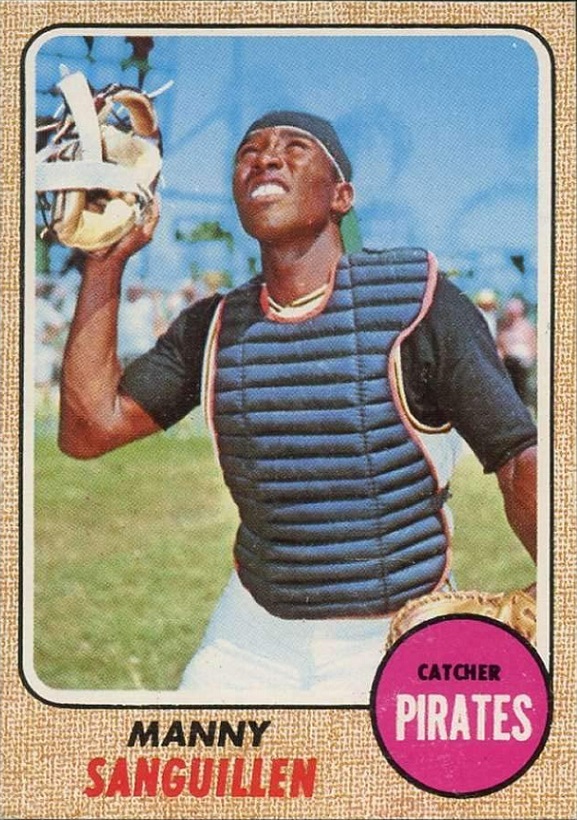 Today’s Card of the Day is the rookie card for one of the Pittsburgh Pirates all-time fan favorites. If you look through Manny Sanguillen’s Topps cards throughout the years, many of them show that trademark smile the fans are used to seeing still to this day when Mr Sanguillen is around Pirate City or PNC Park. My favorite card of him just happens to be his rookie card, showing the young catcher in a staged “action” photo, looking up into the sky with his mask off, looking for a foul pop up. I love the pose and look on his face in this shot. He sells the action part of the card well, which didn’t always happen with these photos. Sanguillen was probably 23 years old when this photo was taken. The 1968 set came well below the season started, so the photo would be from 1967 most likely, though with a March 21st birthday, he still may have been a few days shy of age 23 because it appears to be a Spring Training photo when you look at the background.

A closer look at that background shows some interesting airbrush work. I can’t tell exactly when they were trying to get rid of in the back, but the blue on blue is hard to not notice once you first see it. It might appear as if someone wrote on this particular card, until you see that all of his 1968 cards have that airbrushing. You also see the patches of color randomly standing out around the faint images of people, adding the backdrop. Sanguillen clearly takes the focus of the card in one of the better poses from the entire set. Topps predicted that Sanguillen would became a big league regular, saying that the Pirates were very high on him. That came true, though they did get something wrong in their statement. He wasn’t a familiar sight at Forbes Field for years to come because Forbes was nearing the end of its time. Sanguillen played a total of 112 games at Forbes and 538 at Three Rivers Stadium. Obviously Topps didn’t know that Forbes wouldn’t be around that long, but it’s interesting to look back on now that we know what happened.

The trivia question at the bottom shows a fact that I didn’t know until I read the card. Pete Mikkelsen set the team record with 71 appearances in 1966, breaking the mark set and then tied by Elroy Face (68 in 1956 and 1960). Mikkelsen held that record until it was topped by both Goose Gossage and Kent Tekulve in 1977. It has since been topped 39 more times.

If you want this card of Sanguillen, it can be purchased on eBay for $5-10 in decent shape, ungraded. There are three graded examples deemed to be perfect in every way (PSA 10), which are being sold for $550-$589. The demand for PSA 10 cards by some set collectors drives the prices of those cards much higher than other examples. A PSA 5, which is still a very nice looking card, can be had for $18.