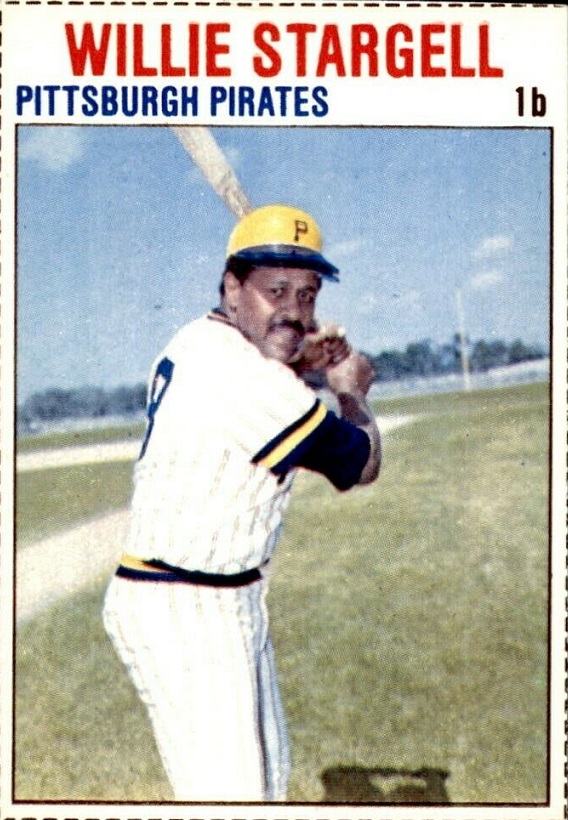 Today’s Card of the Day was produced by Hostess and it was attached to their product boxes. From 1975 until 1979, Hostess included a Willie Stargell card in their set, so I could have picked any of the five to look at today. I went with the one from his MVP season, when Pops helped the Pittsburgh Pirates to their fifth World Series title.

The Hostess cards were rather simple designs most years. White borders with the player/team/position listed in different ways each year. Out of that five year run, the only card that is easily distinguishable from the other years is the 1976 set, which went with a USA theme for the bicentennial. That year the team/player/position were in red, white and blue boxes at the bottom, while the photo portion of the card was much smaller.

The major change for the 1979 series was that the team/player/name was on top of the photo instead of the bottom. In Stargell’s photo, he’s in a staged batting pose, looking directly at the camera. There were no game action photos in the Hostess sets at this time. Here’s the front of the card: These cards came in three-card panels on the bottom of products and most of them were hand-cut into individual cards. However, you can still find complete panels on Ebay and occasionally you can find full boxes. If you were to find a Stargell panel from 1979, you would find him as the center card between Eric Soderholm of the Chicago White Sox and Bob Bailor of the Toronto Blue Jays. They are rare as full panels and almost impossible to find in a full box because full boxes in general are tough to find.

Here’s the back of the card. As you can see, or maybe can’t see because it blends in, the back of the card is just plain white, with black letters/numbers. They did not go all out on these cards, showing just six years of stats and limited statistical categories. Stargell was coming off of a strong 1978 season, which followed two down years in 1976-77. As mentioned above, he would help lead the Pirates to the 1979 World Series and was the co-MVP of the National League, finishing in a tie with Keith Hernandez of the St Louis Cardinals.

If you’re looking to acquire this card, it can be found fairly cheap if you don’t mind the condition flaws. These cards were usually hand-cut by kids and even though borders were there to guide them, many cards have uneven cuts and can go inside the border, which lowers the price. A nicely cut one will cost about $25-$30, while lower grade ones have sold for as low as $2.50 in the recent past.

Will the Pirates move Endy Rodriguez up early in 2023?…