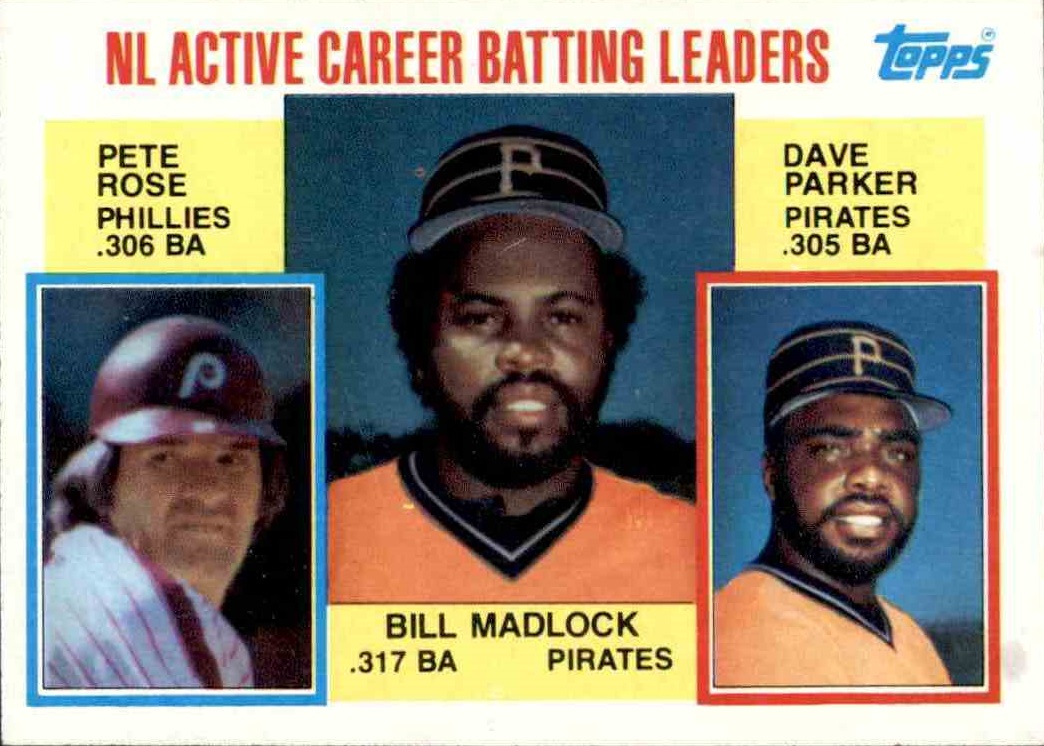 I usually pick the Card of the Day subject well ahead of time based on inspiration. I’ll see a Pittsburgh Pirates card that catches my eye and I’ll think about what I could write about that card. If nothing comes to me quickly, I’ll move on. I did that for this article as well, though the card in the title changed at the last second.

Someone posted a 1984 Topps Bill Madlock card on Twitter that they had sent away to get autographed. It’s a nice action shot of Madlock fielding, great old-style uniforms from that era, and I haven’t featured Madlock here yet as a Card of the Day. So I decided that it would be a great card for today’s article.

When I sat down the next day to write about the card, I needed a good scan for the article. Searching “1984 Topps Madlock”, the first result was a card that usurped the regular 1984 Topps Madlock card for the feature spot in this article. I’ll get back to the regular card at some point, but today’s article is on the 1984 Topps #701, NL Active Batting Leaders, featuring Bill Madlock, Dave Parker and Pete Rose. As you can see by this card, it’s a nice trio of great players, led by Bill Madlock, who had a .317 career average at that point. The all-time hits leader is to the left of Madlock with his .306 career average, while another Pittsburgh Pirates star is to his right, Dave Parker with his .305 career average.

Madlock finished with a .305 career average and his slide from .317 started the very next season after his fourth batting title. He hit .253 in 1984, which was easily his career low during a 15-year career.

Pete Rose finished with a .303 career average. He played three more seasons after batting .245 in 1983. He won three batting titles between 1968 and 1973, giving this trio a total of nine batting titles. More on Rose below. While he wouldn’t have been shown with the Pirates, it’s interesting to see that if they decided to include four players on front, the added player would be Al Oliver. He was with the Montreal Expos at the time, one year removed from winning his only batting title. The back also shows you that to be considered for this card, a player needed at least 3,000 career at-bats. All three players shown on front were well above that mark at this point in their career.

Cobb actually has a .366 average now thanks to modern research finding some small errors in his career totals. In fact, those errors were found after Rose surpassed him in hits, so that famous highlight of him singling off of pitcher Eric Show to break Cobb’s record, wasn’t actually the record-breaking hit. Cobb had 4,189 career hits, not 4,191. The record-breaking hit came three days earlier off of the Cubs Reggie Patterson and had very little fanfare.