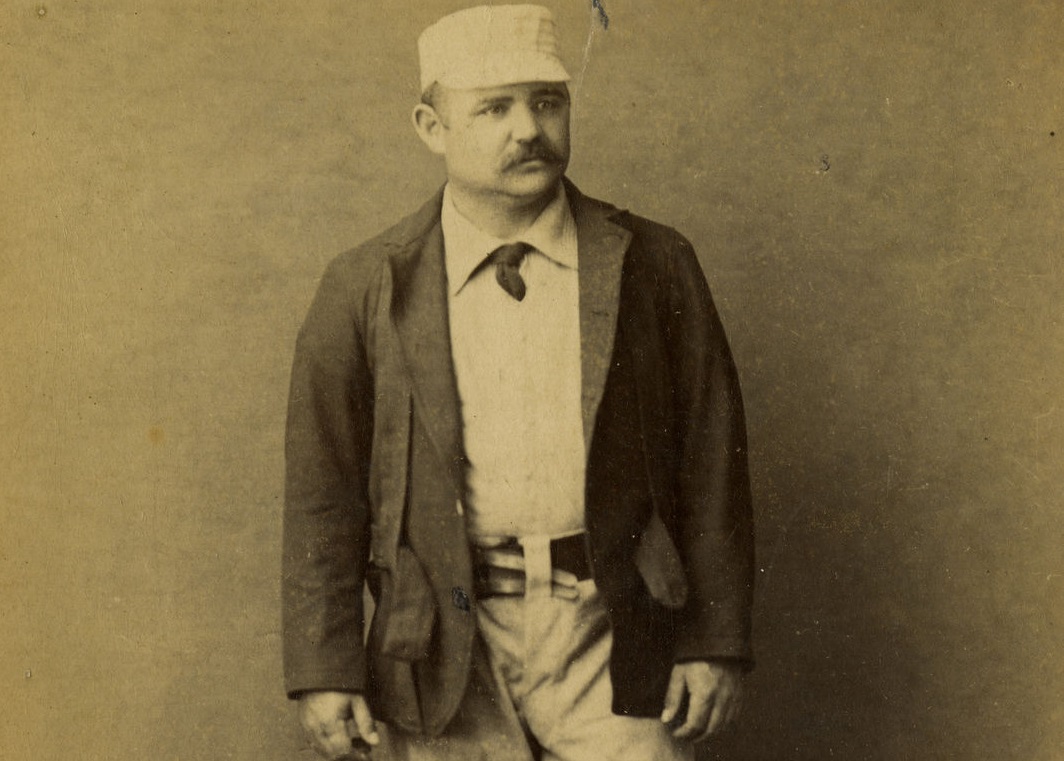 When we launch the Pittsburgh Baseball History site, it’s going to cover more than just the history of the Pittsburgh Pirates franchise. They’re obviously going to be a huge part of the coverage, but the city of Pittsburgh has had other professional baseball teams throughout the years. Here’s the story of one of those teams and their incredible performance during the 1877 season.

In 1877, the Boston Red Stockings were the top team in the National League. Most of the team came from the National Association club in Boston, where they won four of the league’s five titles (1872-75). That was the first Major League, which gave way to the National League in 1876.

This 1877 team is currently referred to as the “Allegheny”, though the 1877 newspaper sources I used for this game all refer to the team as the Alleghenys, with the “s” at the end, so that’s what I’m using.

On May 2, 1877, the Red Stockings played the Alleghenys in an exhibition game prior to Boston’s second game of the regular season. On April 30th, they played a 1-1 tie in their season opener against the Hartfords of Brooklyn. This contest was held at Union Park in Allegheny City, which is now part of Pittsburgh. Approximately 2,000 fans showed up for the game, which had a 3:45 PM start time. The umpire was Al Pratt, a former Major League player, who would become the original manager of the Pirates franchise in 1882.

The Alleghenys had their star 20-year-old pitcher on the mound, James “Pud” Galvin. He played briefly in the National Association in 1875, but he didn’t return to the majors until 1879. Boston countered with Tommy Bond, who just turned 21 years old. They didn’t know it at the time of this particular game, but Bond would go on to have three straight 40+ win seasons (1877-79). In 1877, he started 58 of Boston’s 61 games, not including numerous in-season exhibition games like this particular contest.

The Alleghenys lineup was filled with past and future big league players, quite literally. All 11 players on the team played in the majors at some point, including Ned Williamson, who was recognized as one of the top players during his time. They were a minor league team, but they did a great job assembling the best players they could get at the time.

The Alleghenys batted in the top of the inning and they were retired in order in the first. The powerhouse Red Stockings were also retired in order, as Galvin faced two future Hall of Famers in the inning, George Wright and Deacon White, who would play for the Alleghenys 12 years later. Boston also had Jim O’Rourke, another future Hall of Famer, who was batting cleanup that day.

Galvin walked two batters in the second inning, though he got out of the frame with no damage. The third inning went quickly and quietly. After two Alleghenys were out in the top of the fourth, first baseman Jake Goodman singled for the first hit of the game.

Boston was shut down in the fourth and fifth innings quickly, with Galvin getting a little help in the fifth from shortstop Candy Nelson. He knocked down a hard grounder and made the throw to first to keep Boston out of the hit column. Nelson walked in the sixth, but he got nowhere, leaving the game scoreless.

In the seventh inning, Boston started to get to Galvin. With one out, White walked, then went to second base on a single from O’Rourke. Galvin got a fly ball for the second out, then struck out Bond for the final out.

In the top of the eighth, Galvin came up to the plate with two outs and no one on. After two strikes, he took a mighty swing and launched a ball over the left field fence and on to an adjacent field. The fans erupted. Galvin rounded the bases quickly and the cheers were still getting louder by the time he reached his teammates, so much so that the game had a slight delay.

It was now up to the Pittsburgh pitcher to shut down the Boston bats and hold the 1-0 lead. Galvin retired the first two batters in the eighth, getting a pop up that he caught, followed by a ground out to first base. He struck out Tim Murnane, but the ball got away from the catcher and Murnane reached first base. He would steal second base, before Galvin retired George Wright on a great play by Ned Williamson for the final out.

The Alleghenys got a runner to third base on back-to-back errors in the ninth, though they couldn’t push a run across.

In the bottom of the ninth, things got shaky right away for Galvin and Pittsburgh. A ball hit by Andy Leonard back to Galvin hit off his hand and was fumbled by Nelson, who was charged with an error. Leonard then tried to steal second base and would have been out by four feet according to the game report, but second baseman Williamson dropped the throw from catcher Tom Dolan.

With a man on second and no outs in a 1-0 game, Galvin struck out Deacon White, but Leonard was able to move to third base on a passed ball. James O’Rourke was up next and he popped up to Galvin for the second out. That left it up to Ezra Sutton, who also hit an infield fly, which was caught by first baseman Jake Goodman for the final out.

The Alleghenys had won! They defeated a Boston team that would go on to win the National League title that year by seven games in a 60-game season. Galvin not only allowed just one hit, he homered for the only run. Pittsburgh had just two hits in the game, but they only needed the one for a victory on this day.

As a side note here, the first game in Pittsburgh Pirates franchise history was played exactly five years after this game. First baseman Jake Goodman was the only player in both games for Pittsburgh.