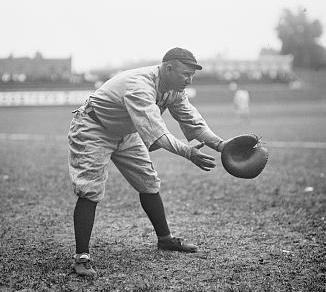 On August 17, 1924, the Pittsburgh Pirates traveled to Warren, Ohio to take on the Warren Moose. It was a semi-pro team managed by Leon “Red” Ames, a pitcher for 17 years in the National League, who won 183 games and pitched against the Pirates 73 times during his career.

The Pirates won 5-4 over the New York Giants in 12 innings on Saturday, August 16th. They were playing at Forbes Field, which sits approximately 80 miles away from Warren, Ohio. Pennsylvania had blue laws against playing baseball on Sunday, so the Pirates never played at home (or in Philadelphia) on Sundays during their first 52 years in existence.

This exhibition game was scheduled well ahead of time for the day off, but the Pirates needed to be in Pittsburgh on Monday to take on Brooklyn and future Hall of Fame pitcher Burleigh Grimes. The Pirates were also three games behind the first place Giants in the pennant race, so maybe it would have been better to take the day off instead of traveling back and forth for an exhibition game.

As you would expect against a semi-pro team, even one that was considered a top one at the time, the Pirates won easily. They hit nine home runs in the 14-3 win. Hall of Famers Kiki Cuyler and Pie Traynor hit two homers each. They both went 3-for-3 and added a single. Jewel Ens, who hit one homer in the majors, collected two on this day. Rabbit Maranville, the third future Hall of Fame in the lineup, had one hit in three trips to the plate. Babe Adams, the hero of the 1909 World Series, pitched the first four innings and allowed two runs.

Here’s the boxscore from the day, along with a brief game recap:

While looking at the boxscore, the first thing I noticed was a pitcher playing outfield. That’s lefty Arnie Stone, a career .125 hitter, replacing Clyde Barnhart mid-game in right field.

The next thing I noticed was the catcher who played the second half of the game, as Cliff Knox moved over to first base to replace starter Charlie Grimm. The second catcher spot says “Land” and he went 1-for-2 with a single. No one with the last name “Land” has ever played for the Pirates, so I had some searching to do.

The possibilities were there that this was an amateur or minor leaguer who was getting a trial with the Pirates, giving them a chance to scout him during a game, without putting him in an important game. The other possibility is he was a player for Warren and the Pirates needed an extra player. Those things happened back then during in-season exhibition games.

Before I took a deep dive into searching, I decided to check the record books for a catcher named Land. I actually knew of one thanks to some earlier research on players who weren’t included in the 1909-11 T206 tobacco card set, but were in the majors at the time. Despite including over 520 cards, the set left out some notable players, so I once put together a list for my own reference.

Grover Land played for Cleveland at that time, debuting in 1909. The problem here was that he last played in 1915 in the majors and 1921 in the minors. A 39-year-old catcher probably isn’t getting a trial three years after he retired.

It turns out I was on the right track, but missing a key detail that would have helped. Land was a coach/scout for the 1923-24 Pirates, so he actually took a turn behind the plate in this game, catching Bud Culloton, whose last name is misspelled “Cullerton” in the game recap.

Finding out who Land was led to another question about his batterymate. Bud Culloton played for the 1925-26 Pirates, so that made me wonder if the name was actually spelled wrong. Perhaps he was an amateur player. I’ll spare the details of the search and say that it turns out that it was Bud Culloton. He joined the Pirates on July 26th and pitched the next day against a semi-pro team in Rhode Island. He also pitched a complete game on September 11th against a minor league team in Buffalo and lost 5-4 on a walk-off homer in the ninth. In between those outings, he pitched five innings in today’s featured game.

So some quick research shows that Culloton pitched at least three games for the 1924 Pirates, even though he doesn’t appear in the record books with that team.

It’s an interesting game from Pirates history. The timing of the game wasn’t good for the club, especially when you factor in the travel, plus their place in the standings at the time. They had three future Hall of Famers in the lineup, with Traynor and Cuyler hitting the ball well in this game. They got two homers from a guy who hit one big league homer. They had a pitcher in the outfield, another pitcher make his second appearance with the Pirates before his actual debut, and a coach caught in a big league uniform nine years after his last big league game.