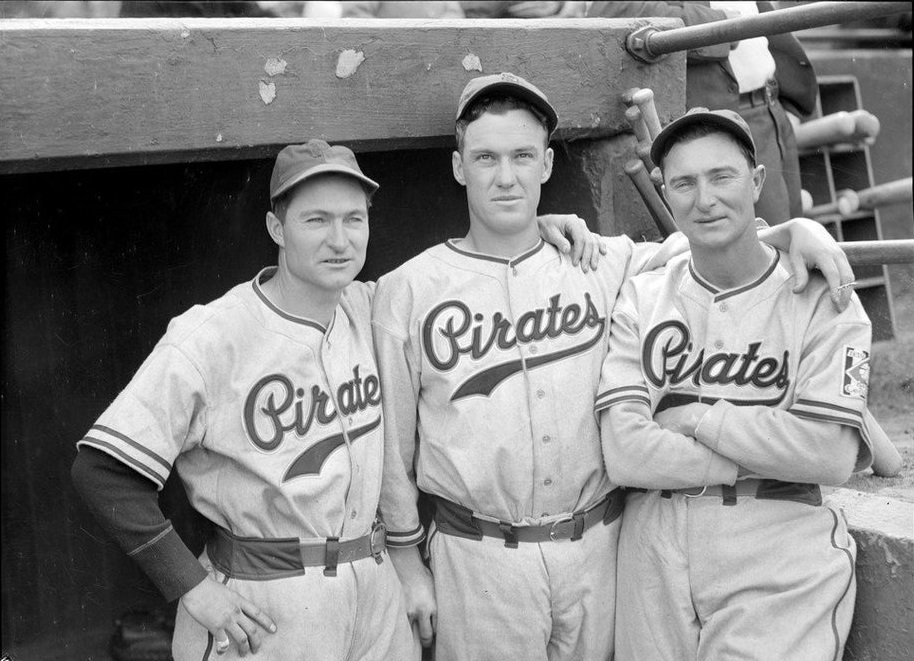 The title here may have thrown you until you saw the date of the game. During the early part of Spring Training in 1933, the Pittsburgh Pirates split up into two groups and played exhibition games. The guys with starting jobs were on a team called the “Regulars”, while the backups and guys fighting for a job played for the “Yanigans”, which was another way of saying the players were an inexperienced group.

The practice of Pirates vs Pirates games went on for a long time in Spring Training, and even more recently they were called Black vs Gold games, though they only played one game in recent years. In some of those distant past years, the Pirates played almost all intrasquad games in Spring Training, only scheduling a few road games at the very end that were on the way to their Opening Day game.

On this particular day, the Regulars were loaded with talent, but what makes it special is what happened in the eighth inning.

The lineup that day featured Lloyd Waner in left field hitting lead-off. He was followed by center fielder Freddie Lindstrom. Paul Waner batted third in right field, while Pie Traynor at third base was the cleanup hitter. After the fifth hitter, first baseman Gus Suhr, young shortstop Arky Vaughan was in the sixth spot. If you’re counting at home, that’s five future Hall of Famers in the top six spots in the lineup. Gus Suhr was no slouch either. He had three seasons with 100+ RBIs during the early/mid 1930s.

The lineup also had second baseman Tony Piet (hit .323 in 1933), backup catcher Hal Finney and starting pitcher Errol Stoner, who was sometimes called “Earl” back then. He’s not to be confused with pitcher Lil Stoner, who played for the 1930 Pirates. Pitcher Bill Swift was used as a pinch-hitter and minor league pitcher Homer Hurst finished the game in relief. Hurst and Stoner never played in the majors. Plus there was that eighth inning player, which we will get to soon.

The Yanigans had an interesting player in the lead-off spot. Kenneth Vaughan, the older brother of Arky Vaughan, was with the team for Spring Training in 1933. He never played in the majors, but he was followed in the lineup by a bunch of players who did. Pep Young batted second, followed by Woody Jensen, Adam Comorosky, Bill Brubaker, Tommy Thevenow and Tom Padden. Joe Ward was the catcher, Spades Wood was the pitcher, while Pirates first-string catcher Earl Grace pinch-hit and pitcher Jim Crandall finished off the game. Crandall and Ward never played in the majors.

Crandall was the son of coach Otis Crandall, who played ten seasons in the majors and won 102 games. The younger Crandall wasn’t actually signed to a contract, but the Pirates were letting him train with the team. They did that in 1932 as well and ended up signing him to a deal and found a minor league spot for him.

Despite the fact that the four pitchers used in this game included three players who never made the majors, and Spades Wood, who had a 5.61 ERA in his brief (1930-31) big league career, the foursome dominated the game. The Regulars won the contest 2-1 in eight innings, with 12 total hits in the game, including ten singles and two doubles.

Hal Finney had the big day with three hits, including a double. No one else had more than one hit. Pie Traynor collected the other double. All of the scoring was done early, with the Regulars getting a run in the first, and both teams tallying a run in the second. The game was played in 80 minutes and approximately 200 fans were in the stands. I didn’t forget the eighth inning surprise. Notice under the name F. Vaughan (Arky’s name was Floyd and they needed to tell him apart from his brother). It’s a little tough to make out the first letter, but it says “H Wagner”. That would be 59-year-old coach Honus Wagner, 16 seasons after he played his final big league game. He batted in the eighth inning, as the greatest shortstop ever took an at-bat away from the man who should be recognized as the second best shortstop ever.

It was an exciting moment for the 200 or so fans in attendance, who went crazy as he walked to the plate. They didn’t get to see much, but they could always say that they saw the great Honus Wagner bat. He came up with a man on base and dropped down a “perfect” bunt to move the runner up. He’s 0-for-1 in the boxscore, but that would now be a sacrifice hit/no at-bat. After the game Wagner said that the fans had wanted to see him bat and he finally consented, though he didn’t need the practice.

Where is Perry Hill these days? He might have been…