The One Who Got Away: George “High Pockets” Kelly 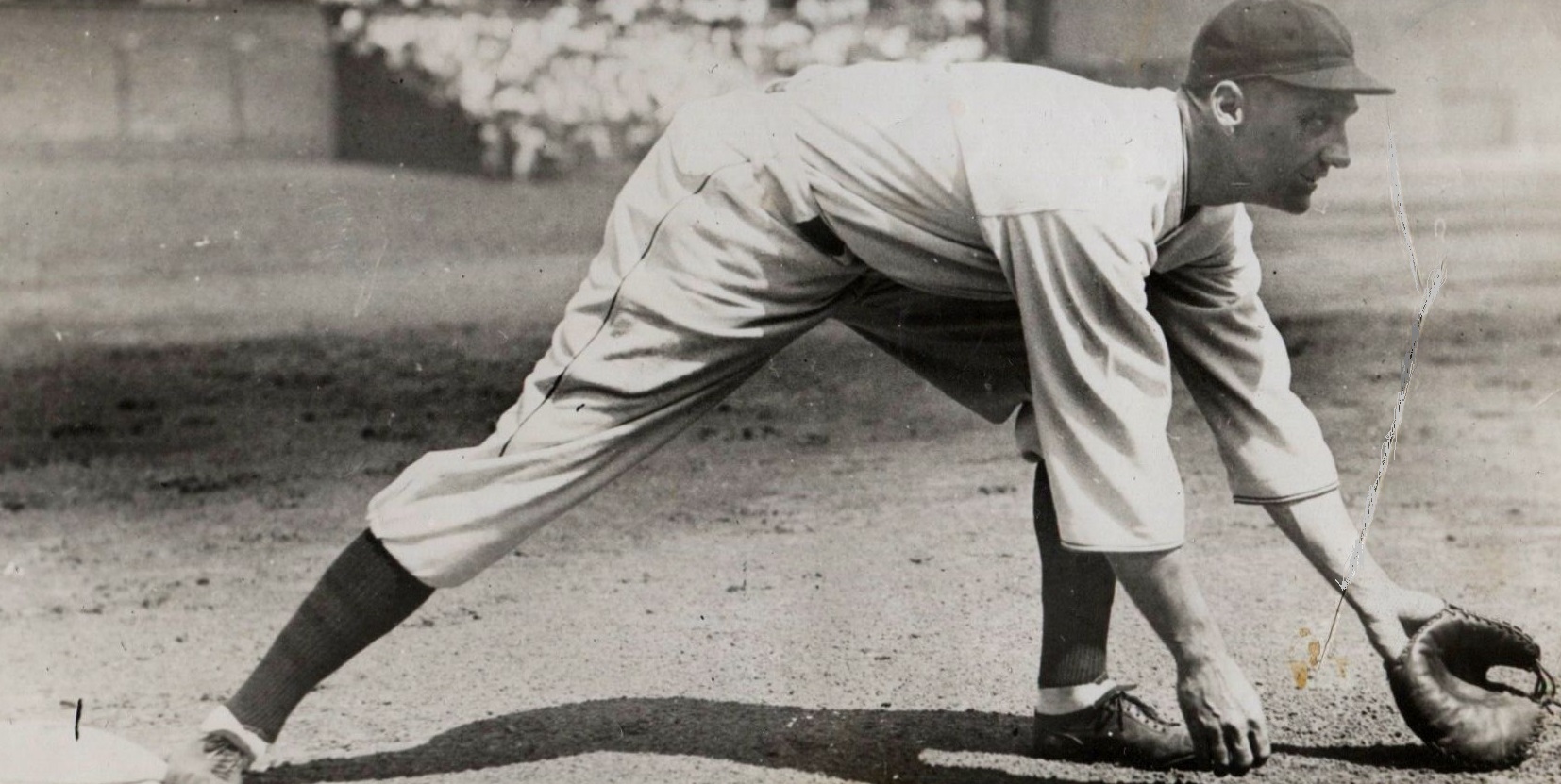 This is our fifth article in a new history series called The One Who Got Away. It’s a look at the players in the past who the Pittsburgh Pirates gave up on too soon. It’s a history feature, so we will be dealing with players pre-2000, who saw very little time with the team before the Pirates sent them on their way.

In the first article, we looked at the Major League debut of Hall of Fame pitcher Dazzy Vance, who got one appearance with the Pirates in 1915 before the sent him to a minor league team, never to return to Pittsburgh. That was followed by outfielder Gene Woodling, who was traded away at 25 years old, a year before he broke out and became a star player for five straight World Series winning teams. He played just 22 games with the Pirates. The third article was Larry Andersen, who pitched well in the minors before the Pirates traded him away in a deal that turned out bad. Next was Red Faber, who was a combo of Andersen and Vance, a Hall of Fame pitcher who never got a chance with the Pirates.

Sticking with the Hall of Fame theme, Vance and Faber weren’t the only future Hall of Famers who the Pirates gave up on too soon in the 1910s. George “High Pockets” Kelly was a 21-year-old utility player in his third season in the majors when the Pirates purchased him from the New York Giants on August 2, 1917. His stay in Pittsburgh was exactly 12 days.

In late July of 1917, the New York Giants came to Pittsburgh for a series. When they left town, they left Kelly behind with the Pirates. At the time, Pittsburgh was without infielder Alex McCarthy and outfielder Lee King. Honus Wagner, who was 43 years old and in his last season in the majors, had a heel injury and needed time off. Wagner was playing first base at the time, so Kelly immediately stepped in and took his place.

With the Giants in 1917, Kelly was 0-for-5 at the plate in nine games and had not played since July 14th. He played a total of 66 games during the 1915-16 seasons, batting .158 each year. The Pirates weren’t acquiring a star player here, but he was a young player who they coveted and tried to acquire from the Giants in the past. If you can give the Pirates any credit here, it’s that the recognized greatness at any early age. Unfortunately, their impatience got in the way, so they lost out on a player who could have greatly changed the way the early 1920s turned out.

Kelly went right into the Pirates lineup after an off-day for the team between the series with the Giants and Boston Braves. On August 4th, he made his Pittsburgh debut, playing first base and batting seventh. He didn’t make a strong initial impression, with an 0-for-4 day at the plate and a ground ball got by him that appeared to be an easy play. At 6’4″, which is tall now, but huge back in 1917, there was a comment made that he was too tall to get down on the ball fast enough.

The fans and writers in Pittsburgh were brutal to Kelly almost immediately. His second game was another rough contest. He went 0-for-3 with a walk and two strikeouts. He was credited with two errors in the boxscore and game recap, though modern day records only show one error now. Both were throwing errors to second base that allowed runners to get to third.

The newspapers said that the fans gave him a sarcastic applause when he drew the walk. They also said that the Pirates were receiving a player named “Jackson” from the Northwest and once he arrived, they would need to release someone, with Kelly being the likely choice. The paper even went as far as saying that it was a shame that Wagner was hurt, because it forced the Pirates to use a player like Kelly. This was all after two games.

The “Jackson” was Charlie Jackson, who lasted 41 games with the Pirates, which was his last big league experience. He also played one game for the 1915 Chicago White Sox. The story of losing a player like George Kelly is already a sad one for Pirates fans, but if a player the caliber of Jackson was the reason he left, that would have made it even worse.

The Pirates were off on August 5th because it was a Sunday and Blue Laws in Pennsylvania made it illegal to play big league games on a Sunday. They were scheduled to play Boston on Monday and Tuesday, then start a series with the Philadelphia Phillies on the 8th, but rain postponed all of those games, sort of.

The August 6th postponement was a controversial one at the time, as the game was called off early by Barney Dreyfuss, who wasn’t at Forbes Field when he decided to call the game off. He was getting rain across town, but it actually wasn’t raining at the ballpark and fans were in the stands waiting for the game to start when they got word that it was canceled. Since it wasn’t raining at the time, the official word was that the game was called due to darkness, an actual issue before lights at stadiums.

With the four straight days off, Kelly got a bit of a reprieve from the fans and writers. It may have extended his brief time with the Pirates as well. On August 9th, he was back in the lineup, batting seventh and playing first base against the Phillies. Kelly went 0-for-3, but he handled all 11 chances in the field and the Pirates won, so he was saved from more bad press for his hitting.

He had a similar day on August 10th in a 1-0 win over Philadelphia. Kelly went 0-for-3 with a clean day in the field, in a game that was played in 86 minutes. He was 0-for-13 with a walk after four games.

The Pirates and Phillies played a doubleheader on August 11th and Kelly started both games at first base. He went 0-for-2 in the first game before being replaced on defense mid-game by Honus Wagner, who finished out the game at first base. Kelly was back in there in game two and he picked up a single in the second inning for his first hit with the Pirates. He would score one batter later on a double by Walter Schmidt. Kelly made an error in the third that cost the Pirates a run, but got that run back in the seventh on a triple, followed by a suicide squeeze bunt.

After the game on August 11th, the Pirates traveled to Chicago for a series. Kelly earned an extra look with his two-hit day, though he also had the error and two strikeouts in that same game, plus the Pirates lost, so he was still on thin ice with the fans and the writers.

In the Chicago opener, Kelly went 0-for-3 before Wagner pinch-hit for him in the ninth inning of the 3-2 loss. You don’t see many instances of a Hall of Fame player batting in place of a different Hall of Fame position player, but it happened here.

In game two, Kelly started, but the Pirates saw enough of him early in the game. After striking out in his first at-bat, Honus Wagner pinch-hit for him in the fourth inning and Kelly was told soon after that he was being returned to the New York Giants. That’s despite the fact that the shortstop Chuck Ward suffered an injury prior to the game and wouldn’t be available to play, so the Pirates were short-handed at the time. Also, the Pirates were 33-71 at the time, so it wasn’t as if Kelly was holding them back. His stats were rough though, hitting .087/.125/.174 in his eight-game trial.

What makes Kelly perfect for The One Who Got Away, is that his return to the Giants may have cost the Pirates a pennant in the early 1920s. The Pirates have very little of value on their roster in 1917, but they quickly built up a contender. The had a winning record by 1920, won 90 games in 1921, followed by 85, 87 and 90 win seasons (in 154-game schedules) over the next three years. It wasn’t until 1925 that they broke through for their first pennant in 16 years.

What was Kelly doing during that 1920-24 run? He led the league with 94 RBIs in 1920, then averaged 121 RBIs over the 1921-24 seasons. Who won the NL pennant during those four seasons you may ask? It was Kelly and the Giants, who made four straight World Series appearances.

It’s impossible to know how things would have played out with him staying in Pittsburgh as far as who wouldn’t have got a shot with the team and who the Giants would have plugged in to replace him. Imagine this scenario though, taking a player who averaged 120 RBIs a year from the first place team and putting him on a 85-90 win team at zero cost to that team. That could have happened if the Pirates were patient with the young Kelly, who had a total of five at-bats during the first four months of the 1917 season. Eight games, including three he left early, isn’t much of a sample size to knock off that type of rust.

The Pirates were awful in 1917 and mediocre the next two years, so it wouldn’t have cost them anything in the standings to develop Kelly, who still didn’t get a full-time shot with the Giants until 1920, when he won his first RBI crown.

Kelly is clearly a marginal Hall of Fame candidate. That’s not the argument here though. His peak performance made him a key part of four straight World Series teams, which is how he got in the Hall of Fame (there’s much more to the actual story). What made it painful to the Pirates is that they were a strong team during his peak and they gave him away at age 21 for nothing, and they may have just cost them a pennant or two during the Giants 1921-24 run.

2 Jun 2020
Free Articles, The One Who Got Away
Featured, George Kelly
Menu
Posting....