Minor League Baseball announced the official cancellation of the 2020 season yesterday in a press release from the league president. 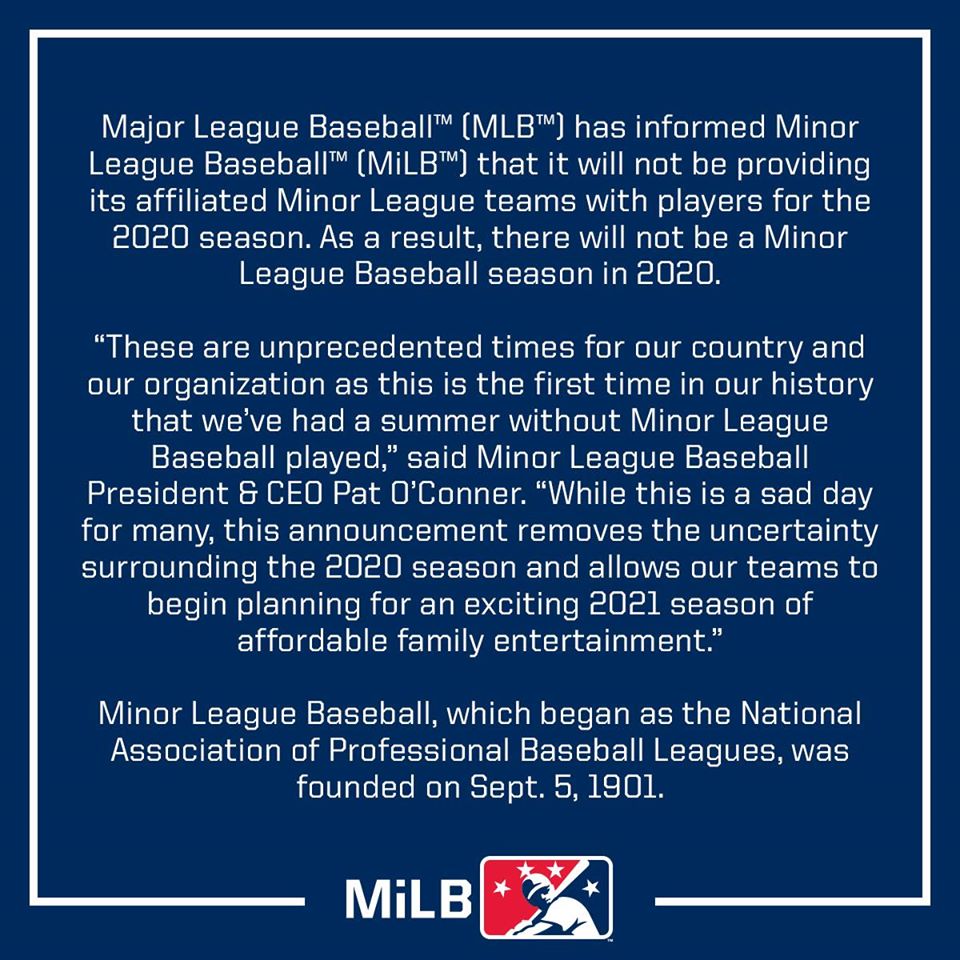 This should come to the surprise of no one, but it needed to be officially announced. It actually helps some teams by announcing it now because they can go ahead and make plans for other events at the stadiums to help regain some of their lost revenue from the season. Until now many teams were relying on souvenir sales for their lone source of income.

It doesn’t mean much for the players themselves. It has been assumed for quite a while that there would be no season. This doesn’t discount a possible expanded Fall Instructional League and/or expanded Arizona Fall Leagues.

As I pointed out in an earlier article, there won’t be much room for more players in winter ball unless rules are changed. Teams in most leagues limit foreign born players on each roster. An example would be Colombia, where the league allows a total of 60 foreign players and most of that number is made up of players from other winter league countries like the Dominican and Venezuela, who weren’t getting places on teams for their own country. Not all of them are current minor leaguers either.

So if minor league players are going to get some game experience, trying to get places in winter leagues aren’t going to be the answer unless those leagues change their rules. My best guess would be teams added in Australia, which they did in 2019 for a team from Korea.

*Fourth round pick Jack Hartman signed for $60,000 according to Jim Callis. The Pirates announced his signing Monday.

4th-rder Jack Hartman's bonus with @Pirates is $60k (slot 108 value = $538,200). Appalachian State RHP, would have been a priority 6th-10th rd senior sign in a normal @MLBDraft, former infielder now up to 98 mph with his fastball, also has high-spin curveball. Will be a reliever.

Our draft tracker has been updated.

**We will have at least four articles today, including the one you’re currently reading. If any news comes up, we will have more. The other scheduled articles for today are as follows:

Card of the Day – Back in 1991, Topps included some draft picks in their set. The Pirates were represented by a high school pitcher with high potential.

1979 Season Recap – The Pirates get ready to take on the St Louis Cardinals for four games.

Hope everyone has a wonderful Wednesday!