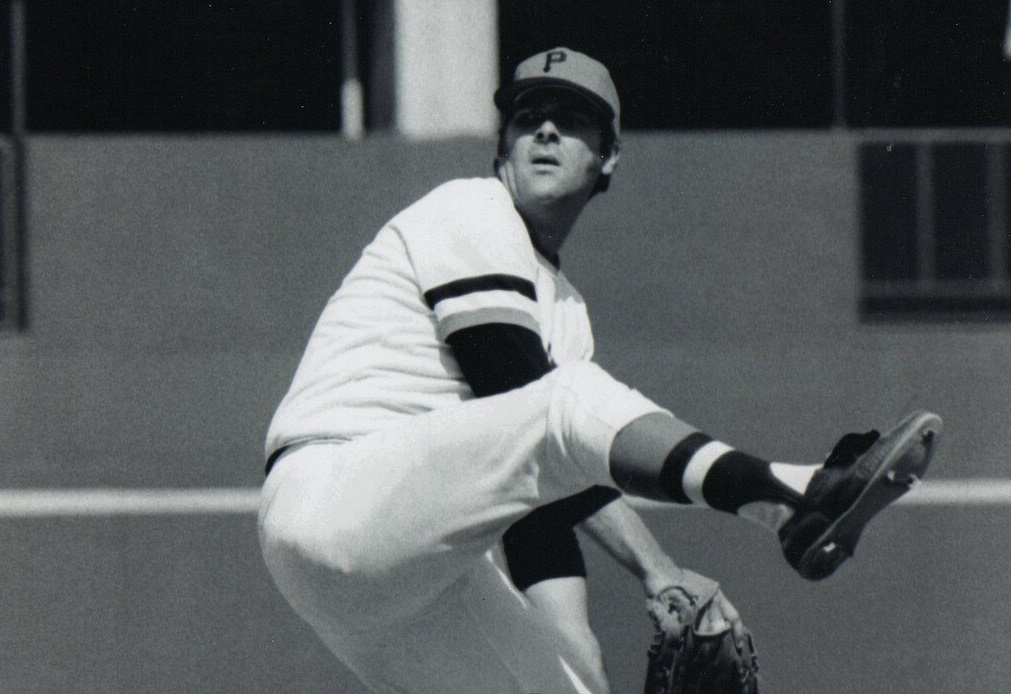 The Pittsburgh Pirates won the NL East in 1975 with a 92-69 record, taking the division by 6.5 games over the Philadelphia Phillies. One of their best moments of that season came early in the year at home against the San Diego Padres.

On May 14th, the Pirates went into a night game at Three Rivers Stadium with a 14-12 record. They were sending Dock Ellis to the mound to take on lefty Randy Jones. They didn’t know it at the time, but Jones was just starting a dominant two-year run that saw him win 42 games total and a Cy Young award in 1976, with a runner-up finish in 1975. The Pirates would hand him one of his shortest outings of the season, but it took extra innings to figure out the winner of this game.

This game was scoreless after three innings, with both teams collecting one hit each. Hall of Famer Willie McCovey changed that in the fourth inning with a solo homer. That lead didn’t last long. Al Oliver tripled to lead-off the bottom of the fourth, then scored on a Richie Zisk sacrifice fly. Both sides were retired in order in the fifth.

Another Hall of Famer gave the Padres the lead in the sixth. Dave Winfield drove in Gene Locklear with a two-out single to make it a 2-1 game. Locklear would end up reaching base in all five plate appearances in this game.

Randy Jones was doing well until the top of the sixth when things fell apart. He gave up a single to Frank Taveras, a double to Bill Robinson, a triple to Al Oliver and a single to Willie Stargell. That ended the day for Jones. Three runs had scored without him recording an out in the sixth. Reliever Alan Foster came on and shut things down in a hurry, facing two batters to record three outs.

Both teams were scoreless again in the seventh, but the San Diego Hall of Famers came through again in the eighth. Winfield made it a 4-3 game with an RBI double, then McCovey tied the score, driving in Winfield with a single. The single came against reliever Ramon Hernandez and was the only batter he faced. Dave Giusti came on for the final out of the inning.

The Pirates got back-to-back singles to start the eighth inning from Oliver and Stargell, with both runners moving up on a bad throw. That put two men in scoring position with no outs, which is where they would stay. Zisk hit one back to the pitcher for the first out. Manny Sanguillen was intentionally walked, then Art Howe and Paul Popovich both made outs to end the frame.

Both teams had two runners on in the ninth inning, but neither could score a run, sending the game into extra innings. The tenth inning saw two runners reach base against Pirates reliever Sam McDowell, but he kept the Padres off the board. The Pirates were retired in order.

In the 11th, McDowell made quick work of the bottom of the lineup. In the bottom of the frame, Dave Parker, who was on the bench due to a lefty starter, pinch-hit for McDowell. He doubled with one out. After Frank Taveras struck out, Bill Robinson went the other way on a two-strike curve and poked a bloop single into shallow right field to give the Pirates the 5-4 win. Robinson said that he never had a game-winning hit look as awful as that, but sometimes it’s better to be lucky than good.

The Pittsburgh Post-Gazette said that the crowd of 8,334 to start the game was “ever-dwindling” by the time that Robinson won the game right before 11 PM. McDowell (pictured above) won his first game with the Pirates. He would win just one more big league game.

Willie Stargell picked up his 1,639th hit in this game, which moved him past Fred Clarke for ninth on the Pirates all-time list. Clarke is still in tenth place and the players in the top ten haven’t changed since Stargell passed Tommy Leach for tenth place in 1974. In fact, the Pirates are the only team in baseball to have a top ten hits leader list that only includes Hall of Famers.

Here’s the boxscore and play-by-play from Baseball-Reference.

Do you still pay yearly? It's too bad because I…

I brought that before, the ball travel faster than the…

You mean one pitch, seems that most of his at…