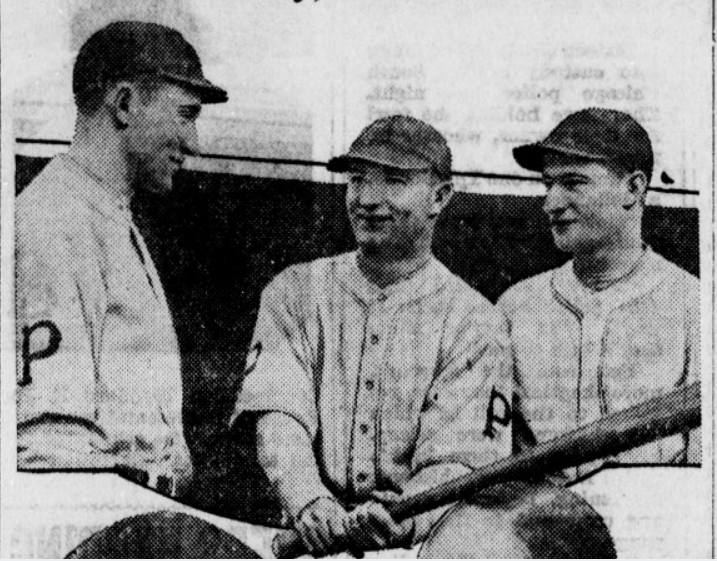 On March 11, 1928, The Pittsburgh Pirates had an early Spring Training intrasquad game. The younger players always played for a team called the Yanigans, which basically means inexperienced. The older players were on a squad called the Regulars. That was something that went on for many years during Spring Training, similar to the Black & Gold game that happened yearly until recently. The difference here being that the Yanigans/Regulars would sometimes play 10+ games during the spring.

On this particular day, Pirates fans in attendance, and those reading the newspaper recap the following day, probably did a triple take when seeing the names. Lloyd Waner, who was coming off of a big rookie season in 1927, was batting lead-off for the Regulars and playing center field. Paul Waner, who was about to play his third season in the majors, was already a superstar. He was playing right field and batting third for the Regulars. Nothing odd about those names, but it was a third name in the boxscore that stood out. In left field for the Yanigans that day, batting seventh, was a “T. Waner”. Could the Pirates be debuting a new Waner brother in the outfield for the third straight season?

It turns out that the third Waner in the outfield that day was actually the cousin of Paul and Lloyd. His name is listed on Baseball-Reference now as “Travea”, but the newspapers back then had quite the time with his name. You can find is spelled Trevis, Travae, Travis, Tranca, Travia and even Traveau. I have no idea what was going on with his name, but they never failed to mention that he was the cousin of Paul and Lloyd, with one article calling him the “potential mid-sized poison of the family”.

T. Waner as we will call him, was with the team for almost all of Spring Training in 1928. He went to play outfield for the Johnstown Johnnies once the season started, then switched to pitching in 1929 and played his last minor league season in 1930. During this March 11th game, he went 1-for-4 with a single and two runs scored, while handling one play out in left field. I could have chosen other games from that spring, as he played regularly early on, but I liked this one because there was a Waner at each outfield position. T. Waner played right field in the other boxscores I checked.

This game isn’t just interesting for the three Waners in the outfield, it also included a total of five future Hall of Famers, with two on the Yanigan side. Shortstop Joe Cronin began his career with the Pirates, who had star shortstop Glenn Wright ahead of him. Cronin was in his third spring with the team and he would soon be sold to a minor league club. He had two hits and scored two runs in this game.

Burleigh Grimes was on the Yanigan side, though he was already a star veteran pitcher. They just needed to get everyone their innings, so Grimes pitched for the young team and got hit around. He allowed seven runs on ten hits in three innings.

On the Regulars, Lloyd Waner had three hits, including a double. Paul Waner had two hits, and Pie Traynor also added a pair of hits.

The Regulars had 18 hits in the game and held a 7-1 lead late in the contest. Pitcher Regis Leheny allowed eight runs over the final three innings and walked nine batters. He was a Pittsburgh resident, who went to school at Duquesne. Leheny was soon cut from the Pirates, but he made the majors briefly four years later with the Boston Red Sox.

It’s an interesting contest due to five Hall of Famers present in a Spring Training game, but add in the Waner family twist and this game was perfect for a Game Rewind feature.

Here’s the boxscore from the game. I brought that before, the ball travel faster than the…

You mean one pitch, seems that most of his at…