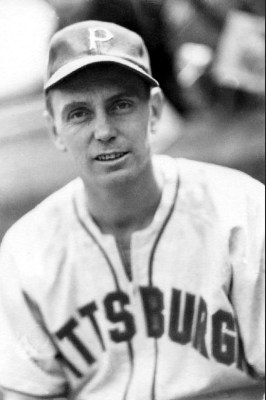 On December 30, 1943, the Pittsburgh Pirates added a first baseman in the deal that I’ve often referred to here as “the Babe trade”. They sent catcher Babe Phelps and cash to the Philadelphia Phillies in exchange for Babe Dahlgren. Just nine months earlier, the Phillies acquired Dahlgren from the Brooklyn Dodgers in a deal that included Pirates great, Lloyd Waner. Dahlgren was a veteran of nine seasons already, a 31-year-old who was coming off of his first All-Star appearance in 1943. The Pirates ended up winning the Babe trade fairly easy, as Phelps retired before playing a game and Dahlgren had a season worth writing about here.

The Pirates went with Elbie Fletcher at first base in 1943, but he was drafted into the Navy after the season and Dahlgren was acquired a month later to fill that hole. Dahlgren’s best season was 1941, when he put up a 2.4 WAR by batting .267 with 23 homers and 89 RBIs, while splitting the season between the Boston Braves and Chicago Cubs. In fact, even with his All-Star season in 1943 included, Dahlgren had a -0.7 WAR in his other eight seasons combined, so 1941 was really an outlier in his career up to that point.

For those who don’t know, the level of competition in baseball was at the lowest point in this era due to all of the player losses to service in the war. Many of the players seeing regular time in 1943-45, would have been bench players during that era, while many of the bench players would have been in the minors, or just getting cups of coffee in the majors. A player like Dahlgren might be on a downside of his career normally at age 31, but he ended up having quite the season for the Pirates.

Dahlgren got off to a slow start with the Pirates, which didn’t last long. In his first ten games, he was hitting .171 with a .423 OPS. He had one big game on April 29th in which he drove in three runs, but the rest of April and early May didn’t go well. By the end of May, Babe (real first name was Ellsworth) had his OPS up to .654 through 35 games. He homered in back-to-back games at the end of the month.

June got off to a terrific start, with a home run in Brooklyn on the 1st. The Pirates then went to the Polo Grounds to meet the Giants and Dahlgren had a home run and two RBIs on June 3rd. During a doubleheader on the 4th, he hit two homers and drove in three runs in game one, then followed that up with two hits in the series finale. The rest of the month was rather quiet, with a .562 OPS in the last 24 games of June. However, Dahlgren made the most of his hits. He had a nine-game hit streak to end the month, with at least one RBI in each of the final six games.

Dahlgren was doing better each month. After a .509 OPS in April, he put up a .696 mark in May and a .706 mark in June. He continued that trend over each of the next two months, topping things off with a great August.

In July, Dahlgren posted a .292 average and a .758 OPS. His big days were back-to-back three-hit games on the 15th/16th, followed by a big series in Brooklyn one week later. In four games against the Dodgers (July 22-24/one doubleheader), Dahlgren had ten hits and drove in eight runs. He added another two RBIs the next day against the Giants in a 15-0 Pirates win.

August was by far his best month and it started with a career day in Boston. He went 4-for-6 with a triple, homer and six RBIs. He had another four-hit game four days later, then drove in two runs in back-to-back wins over the Cubs.

The Pirates won four straight games at home against the Giants from August 9th until 12th and Dahlgren contributed in each win, driving in a total of eight runs. On August 27th, he had three hits, three RBIs and two walks. In 31 August games, he had a .339/.403/.512 slash line.

September ended the string of improving every month, but it was still his second best month of the season. Dahlgren had six games in which he drove in three runs, twice doing that in back-to-back contests. In 31 games total, including an October 1st doubleheader to end the schedule, he hit .297 and drove in 26 runs. It was two runs on the final day of the season that were most important.

Now with the RBI stat not being as highly regarded, a 100-RBI season isn’t celebrated as much. It’s still a significant number, but the more advanced stats are celebrated more now. However, back in 1944, it was considered a major mark, especially coming from someone who you wouldn’t expect to accomplish it. In the eighth inning of that last day doubleheader (October 1st), Dahlgren hit a two-run double, giving him 101 RBIs on the season. He started the final game of the season, but left very early so 28-year-old rookie Harry Sweeney could play what ended up being his only Major League game.

Dahlgren batted .289, with 173 hits, which ranked tenth in the National League. He ranked sixth with 101 RBIs and he led the league with 158 games played. In a 154-game schedule, he played four more games because tie contests were played in full as makeup games, though the tie game stats still counted. They actually played five ties that year, so it would have been possible to play 159 games in 1944 if they got the full schedule in. His 158 games played total was a Pirates team record until broken in the 1962 season when they went to a 162-game schedule.

What really got Dahlgren his own article is what happened after the season. In the NL MVP voting, he got a first place vote. He finished 12th in the MVP voting, right behind teammates Bob Elliott (10th place) and Rip Sewell (11th). Dahlgren was actually hurt by his home park. His OPS was 143 points higher on the road, where he hit 11 of his 12 homers. In fact, his only home run in Forbes Field was an inside-the-park homer. It was against Al Gerheauser, who would become Dahlgren’s teammate the next season in Pittsburgh.