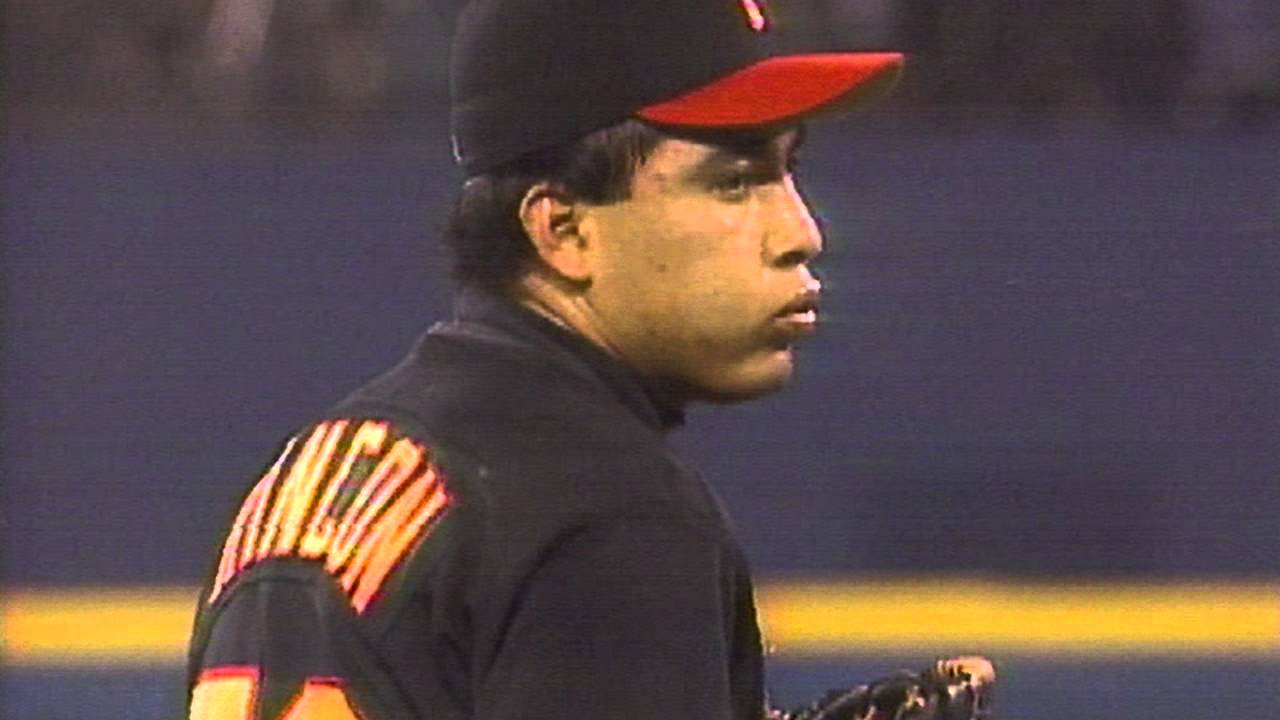 Six former Pittsburgh Pirates players born on this date, plus one very memorable game of note.

Lee Meadows, pitcher for the 1923-29 Pirates. Meadows was already in the middle of his ninth big league season when the Pirates acquired him from the Philadelphia Phillies in a four-player trade. While he began his career with eight straight seasons of 11+ wins, he was 1-3, 13.27 in five starts and three relief appearances at the time of the 1923 trade. He immediately turned things around with the Pirates, going 16-10, 3.01 in 2.27 innings over the last 4 1/2 months of the season. In 1924, he went 13-12, 3.26 in 229.1 innings. The Pirates went to the World Series in 1925 and Meadows was a big part of that team. He set a career high with 19 wins and he pitched 255.1 innings. He pitched well in game one of the World Series, but lost to the great Walter Johnson. Meadow’s career high for wins lasted just one season. In 1926, he posted a 20-9 record, leading the NL in victories. That was followed by another Pirates World Series appearance in 1927 and he went 19-10, 3.40, while leading the league with 25 complete games. Meadows barely pitched during his final two seasons in the majors, seeing just 12.2 innings total during the 1928-29 seasons. He finished his career with a 188-180 record, though he went 88-52 with the Pirates and 100-128 elsewhere.

Tom Gorzelanny, pitcher for the 2005-09 Pirates. He was a second round draft pick in 2003 by the Pirates. Three years prior, he was taken in the 38th round by the Chicago White Sox. Gorzelanny signed early enough to get in eight starts in the NY-Penn League in 2003, posting a 1.78 ERA. He moved quickly through the minors, though his time in High-A ball was shaky, with a 4.85 ERA in ten starts. He did show signs of success during that time, striking out 61 batters in 55.2 innings. Gorzelanny moved up to Double-A the next year, going 8-5, 3.26 with 124 strikeouts in 129.2 innings, earning a mid-September promotion for three games with the Pirates. He began the 2006 season in Triple-A, coming back up to the majors in July to make 11 starts. Gorzelanny earned a spot in the 2007 rotation and had his best season of his career, going 14-10, 3.88 in 201.2 innings, making 32 starts. Things fell apart the next season, as he had a 6.57 ERA through 17 starts in early July, earning himself a demotion to the minors. He returned in mid-August for four starts and didn’t pitch any better.

In 2009, Gorzelanny spent most of the early season in the minors as a starter, though when he came up to the Pirates he was put in the bullpen. At the trading deadline, he was sent to the Cubs along with John Grabow for Josh Harrison, Kevin Hart and Jose Ascanio. Gorzelanny pitched in the majors until 2016, seeing time with the Nationals, Brewers, Indians and Tigers. He was 25-26, 4.79 in five seasons with the Pirates, and 50-53, 4.40 in his 12-year career. He made 121 starts, 193 relief appearances and he pitched 883.2 innings.

Phil Dumatrait, pitcher for the 2008-09 Pirates. He was a first round draft in 2000 of the Boston Red Sox. He didn’t make it to the majors until 2007, when he made six starts for the Cincinnati Reds with extremely poor results, going 0-4, 15.00 in 18 innings. The Pirates selected him off waivers on October 26, 2007 and he made the 2008 Opening Day roster. Dumatrait made ten relief appearances in April, then moved to a starting role in May, making 11 starts. He went 3-4, 5.26 in 78.2 innings before a rotator cuff injury sidelined him for the rest of the season and part of the following year. Dumatrait returned to the Pirates in August of 2009 after a minor league rehab assignment. He made 15 relief appearances for Pittsburgh, going 0-2, 6.92 in 13 innings. He was granted free agency after the season and signed with the Tigers. He was released by Detroit in May of 2010, signing with the Twins six months later. Dumatrait pitched 45 games in relief, with a 3.92 ERA for the 2011 Twins, then announced his retirement from baseball in 2012.

Brad Eldred, first baseman for the 2005 and 2007 Pirates. He was a sixth round draft pick in 2002 of the Pirates. Eldred began to hit homers in the minors at a fast pace, carrying him to the majors by the middle of the 2005 season. In his first full season in the minors in 2003, he hit 28 homers for Hickory. The next season, Eldred showed even more power as he split the year between High-A and Double-A, hitting 38 bombs, with a .301 average and 137 RBIs. He began the 2005 season in Double-A, but quickly moved up a level after 13 homers in 21 games. In 53 Triple-A games, he batted .284 with 15 homers and 48 RBIs, earning a promotion to the majors just after the All-Star break. In 55 games for the Pirates, Eldred hit .221 with 12 homers (40 total during the season) and 27 RBIs, striking out 77 times. He missed nearly the entire 2006 season after fracturing his thumb in a collision down in Triple-A. Returning healthy in 2007, Eldred added right field to his resume and made the Pirates out of Spring Training. He was used very little the first two months, getting ten starts and eight games off the bench before being sent back to the minors. The Pirates let him go after the season ended and he later played 11 games for the 2010 Rockies and five games for the Tigers in 2012. He was released by the Tigers in June of 2012 so he could sign with a team in Japan, where he played until 2018. Eldred hit 251 career homers in the minors, 163 in Japan and 15 in the majors.

Dave Ricketts, catcher for the 1970 Pirates. He signed with the Cardinals as an amateur in 1957, spending the next two seasons serving in the military before returning during the 1960 season. Ricketts made his Major League debut at the end of the 1963 season, playing three games for St Louis. Two years later, he got into another 11 games, then spent the 1966 season in the minors. During the next three years, Ricketts served as a backup catcher for the Cardinals, playing a total of 116 games over his five seasons with the team. The Pirates acquired him, along with Dave Giusti, on October 21, 1969 in exchange for catcher Carl Taylor and a minor leaguer. Ricketts would serve as the Pirates third-string catcher behind Manny Sanguillen and Jerry May. He saw very little time that season, playing 14 games, all off the bench, and going to bat just 12 times. He retired after the season and served as the Pirates bullpen coach for three years before moving on to the same role for the Cardinals, working with the team into the 1990’s. His brother Dick Ricketts was a pitcher for the 1959 Cardinals.

Johnny Wyrostek, utility fielder for the 1942-43 Pirates. He was originally signed by the Cardinals in 1937, coming over to the Pirates after they purchased his contract late in 1941 with no Major League experience. Wyrostek spent the 1942 season playing for Toronto of the International League, where he hit .270 with 18 homers, 79 RBIs and 78 walks. He was a September call-up for the Pirates, hitting .114 (4-for-35) in nine games. He was with Pittsburgh all of 1942, playing 51 games, with a .152 average and one RBI in 83 plate appearances. Wyrostek started only nine games all year and played six different positions (all but SS/C/P). After the season, the Pirates traded him, along with pitcher Johnny Podgajny and cash, to the St Louis Cardinals for pitcher Preacher Roe. Wyrostek ended up having a productive Major League career, playing nine full seasons in the majors, split between the Phillies and Reds from 1946-54. He was a two-time All-Star (1950-51), hitting .271 career in 1,221 games, with 525 runs scored and 481 RBIs.

On this date in 1997, starter Francisco Cordova and reliever Ricardo Rincon held the Houston Astros hitless for ten innings before pinch-hitter Mark Smith hit a three-run, walk-off home run in the bottom of the tenth for a 3-0 Pirates victory. This game is the only combined and extra innings no-hitter in team history. Cordova tossed the first nine frames, while Rincon threw the tenth and got the win. The homer for Smith was just his third of the season. The Pirates had a 44-45 record at the end of play that day.

Here’s the boxscore and play-by-play

Here’s a replay of the game

The Pittsburgh Pirates couldn't carry Saturday's victory into Sunday and ...
112

The Pittsburgh Pirates don't win many games, but they've really ...
91

But Q is too perfect. Apart from the performance, he…

We wore him out!