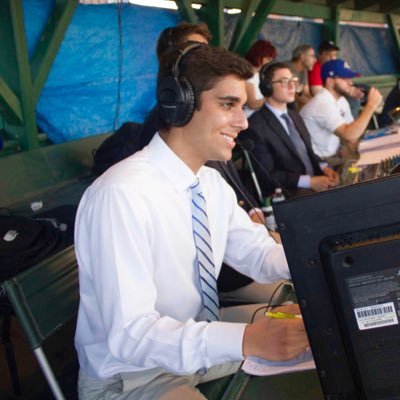 Here at Pirates Prospects, we appreciate speaking with other prospect analysts, especially those who dive deep into player evaluation at all levels.  We recently spent time with Aram Leighton, an emerging name in the prospect analyst world, to get his thoughts on the Pirates’ minor league system.

Aram is the Founder and Executive Editor of Just Baseball. A Syracuse graduate, Aram broadcasted in the Cape Cod League and Minor Leagues before launching JustBaseball.com. Aram hosts “Outside the Box with Jeff Conine” and the Locked on MLB Prospects podcasts.

Tell us about your baseball background. What was your path to co-founder of JustBaseball.com and host of the Locked on MLB Prospects podcast?

Growing up in South Florida, I played baseball my whole life. Ahead of my senior season, I committed to play in college, but had been dealing with recurring shoulder issues for years. After finding out I would need labrum surgery among other issues with my arm, I pivoted to writing and broadcasting. It was really hard to step away from the game I played my whole life, but what I realized was covering baseball would give me a much longer career intertwined in the sport I love.

After graduating from Syracuse University, I took a Minor League play by play position, but that job disappeared with the cancelled season. During that time, I was hosting Locked On MLB Prospects, but had a desire to do more, so I came up with the idea for JustBaseball.com and it has been incredible to see how rapidly everything has grown.

When you are studying hitting and pitching prospects, what traits are you looking for? And do you lean more toward data, video, live looks or conversations with scouts, executives and analysts?

It is hard to do, but I try to watch players without diving too deep into their numbers prior. I rely a lot on what I see in person or on video, then look towards the numbers to hopefully corroborate my takeaways. Of course I always have a good idea of how a guy is doing, but feel like if I look at the numbers and batted ball/pitch data before I watch a player, I subject myself to confirmation bias.

When it comes to compiling information, I really find value out of talking to players themselves. I am fortunate to have developed relationships with players from my playing days and broadcasting days. Unsurprisingly, the information you can get on a player from those who faced him is typically the most helpful, but even getting into a player’s mind and how in tune he is with himself can really help gather a clear picture on a guy.

When it comes to traits, I am not a believer that hitting or pitching is cookie-cut, so I try not to paint a broad brush. One area that I think separates the really consistent hitters from the rest is control of their lower half. There’s a lot of different ways to get that weight into your back hip and keep the lower half incorporated in your swing, but many young hitters struggle with that and it affects their whole swing. It is the little things that matter to me as well: how comfortable are a guy’s takes? How does he adjust between at bats? Does he repeat his mechanics well? There are plenty of parallels on the mound as well. Generally with pitchers, I need to see them in person, and pitch data is always helpful, but even judging by hitter reactions to pitches can help give you an idea of what that guy has working for him.

It sounds like you’ve seen some good traits in 2B Nick Gonzales. What stands out about him? Where does he need to improve? Is there a player comp that comes to mind?

I am as high on Nick Gonzales as anyone. I had the opportunity to watch this dude play day in and day out in the Cape Cod League when I was broadcasting out there for the Cotuit Kettleers … and man was it a privilege. His hands are lightning quick, he repeats his swing so well, and despite not being the most imposing in stature, he generates pretty easy power.

I think the power grades many have given him are way off. I watched him miss balls with wood to the opposite field that got out and cleared 400 in dead center with ease as well. When he wanted to, he would put on a show in batting practice, too. His quickness paired with his bat control allows him to make late decisions and get to almost any pitch. On top all that, he has what it takes between the ears. I was always fascinated hearing him talk about what he was looking to do in BP or his approach in games. He’s a really cerebral hitter. I’m not saying he is going to be this guy … but look at his swing alongside Mike Trout’s. There’s some similarity there.

PIrates Prospects’ note: Here’s a look at the swings of Gonzales and Trout:

A side by side video breakdown of his and Mike Trout’s swing. A lot of similarities 👀

Also check out our analysis of Gonzales’ swing changes from last year to this year.

There seems to be some industry disagreement about SP Tahnaj Thomas. He is the #97 ranked prospect on Fangraphs, but is outside the Pirates top 10 on several other sites. (He’s #12 in our recent rankings.) What drives the discrepancies between his scouting reports?

The thing with a guy like Tahnaj Thomas is that, at this point in his career, he can look totally different from start to start. Some of these reports could be off of two outings that legitimately look like two different pitchers. Thomas has an electric fastball, which has touched 101 MPH and a slider that is inconsistent, but when it is working for him I saw a potential plus pitch. A fastball/slider duo for Thomas would be enough to make him a potentially elite high-leverage reliever, but I am not going to send him to the bullpen just yet.

Walks have been a huge issue for Thomas, but it is important to remember that he made the move from the infield to the mound just four years ago. He’s athletic and loose, which leads me to believe that he can figure out how to repeat his mechanics more effectively. If Thomas can’t find a feel for his secondaries consistently, a move to the bullpen is possible, however he could still have a lot of value back there. I am willing to be patient on a big bodied, athletic pitcher who throws 100 MPH despite only being on the mound for four years.

Pop-up prospect is right! Matt Fraizer has been an awesome story, and I have really liked what I have seen from him. He made some necessary changes at the plate that have really helped him unlock the power he possesses. Fraizer was a bit of a drifter at the plate, which was sapping his power (0 HR in his first pro season). He adjusted his set up to allow him to get into his legs more and keep his weight back, which has helped him tap into his above average raw power and hit the ball in the air more.

A pop-up guy like Fraizer is really hard to project, but there’s no way around this being a wonderful development for the Pirates. He has the athleticism to stick in center, which would take some pressure off of the bat. There’s definitely a chance he becomes an above-average regular out there, but I will need to see a bit more in Double-A before I can make a true prediction.

The Pirates took some big swings in the draft, nabbing four players who were considered potential first rounders in C Henry Davis, SP Anthony Solometo, OF Lonnie White Jr. and SP/SS Bubba Chandler. What are your initial scouting thoughts on those players?

Bubba Chandler is a first-round talent. In fact, from what I was hearing, certain teams in the back end of the first round were priced out. Solometo is a late first-round talent, as well. I thought Lonnie White Jr. may slip away, but securing a player of his upside where they did in the draft was huge. Davis is a really high-floor prospect for me, with a chance to be an All-Star caliber catcher. I would say Solometo is high floor as well with his pitchability and command of multiple pitches, projecting more as a back-end guy with middle-of-the-rotation upside. Chandler and White Jr. could have a wide range of outcomes, and I really need to see more, but they have major upside.

What’s your take on how the Pirates are going about building a farm system?

I have liked the last couple drafts from the Pirates and they have made some decent trades to help bolster the system. I loved the Taillon return, especially Roansy Contreras who is most likely going to crack Just Baseball’s Top 100 list. I like what I see from Canaan Smith-Njigba as well. I think he is a big-league bat.

What would your top 10 Pirates prospects look like right now?

My take on the Pirates system may be a bit different than most, but my top players are as follows:

Is there a Pirates prospect that you consider overrated? Underrated (or simply lesser known)?

I think Jared Jones is underrated. I am guilty of underrating him a bit myself here, but that’s because I haven’t seen too much of him yet. He is one guy who, based on what I have seen in limited amounts, could jump into even top 100 conversation next season. Big time stuff. Eddy Yean has had a bit of a down year, but I love his stuff as well. He is another guy who I think will explode next season.

On the overrated side, I am not huge on Tucupita Marcano. I think he can be a big leaguer, but most likely just a utility guy.

Organizations are always looking for the next undervalued skill or asset. Through your observations and conversations with folks in the industry, what are cutting-edge clubs exploring in prospect acquisition or development?

I think we are seeing teams buy into their own philosophies and play to their strengths. The Indians know that they can develop pitching really well, so they have targeted guys with great pitchability, then look to develop the stuff. Generally, the philosophy has been to chase the stuff and teach them to pitch, but Cleveland has had success with the opposite approach.

Let’s wrap up on a slightly different topic. We love baseball collectibles here at the Pittsburgh Baseball Network, and I know that you are an avid collector. What’s your most prized possession? What’s your favorite Pittsburgh-related item? And if you were to recommend a Pirates prospect whose baseball card our readers should target, who would it be?

I am really lucky to have collected a ton of baseball cards with my late father over the years. We were always into vintage cards, and my most prized is a Ty Cobb T-206 card he gave me for high school graduation. In terms of the modern cards I collect now and invest in now, I have invested as much in Nick Gonzales as I have in any other prospect not named Brennen Davis. I think he is a safe bet without compromising the major upside he has. My favorite Pirates memorabilia is definitely my Roberto Clemente cards though.

Thanks to Aram for sharing his views about prospects in the Pirates system.  You can follow him on Twitter at AramLeighton8.