Prospect Watch: Greensboro Loses Opener, 2-0 Marauders Get a Day Off 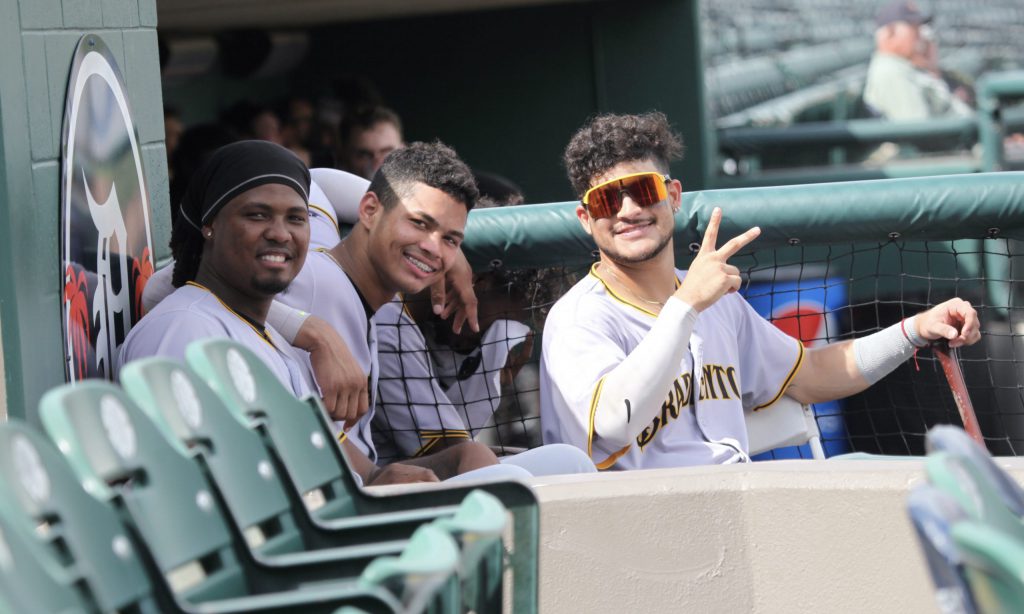 Your daily Pittsburgh Pirates Prospect Watch article for recaps of all of today’s games. Be sure to pick up your copy of the latest Prospect Guide in our store, available as an ebook or a limited edition paperback.

Bradenton, with a 2-0 series lead, will rest a day and then have three tries in Tampa to win the league title.

Indianapolis (57-64) lost to Omaha, 5-2.  Reliever John O’Reilly made another start, giving up four runs over four innings.  Yerry De Los Santos made his AAA debut with two scoreless innings and Blake Weiman struck out the side in the ninth.  Both Indy runs scored on bombs by Rodolfo Castro, his first two in AAA, which filled in a blank space between AA and the majors.  The rest of the offense had just five singles.  Cal Mitchell and Canaan Smith-Njigba made their AAA debuts, each going 1-for-4.  Oneil Cruz was 0-for-4.  Mason Martin pinch hit for Michael Chavis in the eighth and struck out.  Chavis was hit by a pitch early in the game, but stayed in for five innings afterwards, so hopefully he’s not hurt.

Greensboro blew early leads of 2-0 and 5-2, then blew a one-run lead in the ninth, losing the opener of its playoff series with Bowling Green, 10-8.  Michael Burrows looked great early on, fanning five in the first two innings.  Aaron Shackelford gave the Grasshoppers a 2-0 lead with a two-run blast in the second.  Burrows, though, gave up a two-run homer that tied the game in the top of the third.  The Hoppers came back with three in the bottom of the inning, two on a double by Matt Gorski.  In the fourth, though, Burrows gave up a leadoff home run and things went downhill from there.  He retired nobody in the inning, leaving with the score 5-5 and two runners on.  Steven Jennings let both of them score on sacrifice flies.

Jennings ultimately threw three perfect innings and Colin Selby followed with two scoreless innings, while Greensboro gradually came back to take a lead of 8-7.  Nick Gonzales doubled in a run in the fourth and Will Matthiessen led off the fifth with a home run.  Liover Peguero singled in the go-ahead run in the sixth.  The lead lasted until the ninth, when Enmanuel Mejia gave up three straight singles with one out to tie the game.  An error by Gorski on the last single let put Bowling Green up, 9-8, and the last runs scored on a sacrifice fly.  The Hoppers went down in order in the bottom of the inning.

The Black team (31-20) lost to the Rays2, 6-4.  The Pirates trailed, 6-0, going into the ninth and rallied for four runs, but couldn’t get any more.  Starter Eliecer Romero had a rough first inning through no fault of his own, giving up two unearned runs despite not allowing a walk or a hit.  His defense committed four errors, three by shortstop Javier Rivas.  Romero eventually gave up two earned runs.  Diego Chiquillo and Reyson Santos each allowed one run.  The Pirates had only three hits, but drew eight walks.  Osvaldo Gavilan had a double and two walks, and Shalin Polanco a double and one walk.  Catcher Omar Alfonzo drew three walks.

The Gold team (17-34) got pummeled by the Brewers2, 9-1.  Luigi Hernandez had a good start, allowing just one hit and one earned run over three and two-thirds innings.  Lewys Guzman and Rafael Mendez had considerably more trouble, allowing seven runs combined, six earned, in an inning and two-thirds.  A lot of the damage came on walks and errors, as the Pirates allowed only five hits.  They committed six errors.  They had only three hits, all singles.  Gustavo Armas had a single and three walks.

P2Daily: Travis Swaggerty Coming Up Clutch For Indianapolis This Season

If 3 strike outs is golden and 4 is platinum,…

Figuring out who they'll protect in a vacuum is kinda…

I bet there are some teams out there that wish…

Williams: The Pirates Need to…

Sorry, this team is not close to contending. Nothing will…

So here is my question: how much has Reynolds finding…