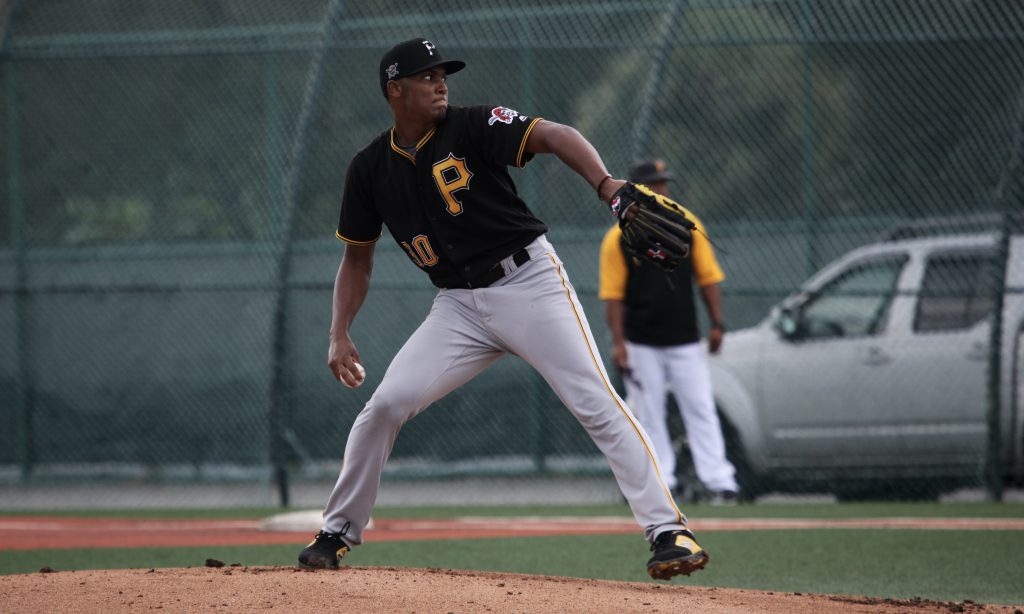 Last week I looked at the top pitchers by age for the Pittsburgh Pirates. The group of 18-year-old pitchers provided a very interesting result, mostly because I limited the possibilities to people who actually played during the 2021 season. That eliminated 2021 draft picks Anthony Solometo, Bubba Chandler and Owen Kellington from consideration and left a group of young international players who either struggled or don’t have the highest upside. My choice for that age ended up being Cristopher Cruz.

I decided to dig a little deeper into his season with some help from Victor Black, former Pirates prospect and current Minor League Pattern & Throwing Coordinator for the Pirates. Most of Black’s work comes with the lower level players. While he hasn’t been doing the brunt of the work with Cruz, he has worked with him enough to add some great insight on why we shouldn’t put too much weight into the results we saw from Cruz during the 2021 season.

Let’s get the bad stuff out of the way right away. Cruz started eight games and pitched twice in relief for the 2021 FCL Pirates. He pitched a total of 29.1 innings, finishing with a 6.44 ERA, a 1.77 WHIP and a 25:23 BB/SO ratio. The strikeout rate is acceptable, as is his .241 BAA, but not when both stats are paired with 25 walks in 29.1 innings. Cruz had some rough outings, with two in particular resulting in ten earned runs over three innings. He had a 3.76 ERA in his other eight appearances. Considering that the league had a 4.85 ERA in 2021 and the average age of pitchers was 2 1/2 years older than him, he was basically above average for 80% of his season…except for the walks. The walks are really the big issue here, and you’ll be happy to know that there is working being done in that area.

Cruz was the big signing by the Pirates on day one of the 2019-20 international signing period. They eventually signed Po-Yu Chen for more money during that signing period, but he was signed much later in the process. Cruz was one of four high upside pitchers signed by the Pirates on July 2, 2019, but his $850,000 bonus was easily the highest of the group. He was also rated among the top 30 prospects available going into the signing period, and he ranked particularly high among pitchers.

The scouting report on Cruz when he signed was that he threw his fastball 87-90 MPH, with it getting as high as 92-94 MPH. He had the makings of a solid curveball, an improving changeup, and plenty of projection left in his 6’2″ frame. It also said that he had a clean delivery, plenty of arm speed, and a good feel for pitching. MLB Pipeline said that he had the possibility of being a top of the rotation pitcher.

One of the first things I wanted to do is get an updated scouting report in comparison to the original scouting report from two and a half years ago. With a 16-year-old having arm speed, projection in his frame and top of the rotation possibilities, you would expect that there would be added velocity in his future and that has already started to show up. You don’t have that kind of potential while throwing 87-90 MPH, without pinpoint command and advanced secondary pitches. Cruz has add quite a bit to his velocity since signing. He now hits 97 MPH, and instead of occasionally topping out at 94 MPH, he’s hitting that number often.

The rest of the scouting report has basically stayed the same for Cruz, who turned 19 earlier this month, except some of that filling out has already taken place, as you would expect. The added velocity is great, probably an improvement of 4-5 MPH on average, but it’s not worth much if he isn’t throwing strikes. There’s good news on that front, which I gathered from my talks with Victor Black.

I’ll point out first that a majority of the work with Cruz has been done up to this point with Amaury Telemaco, David Perez and Renny Duarte, coaches in the Dominican. Black first saw Cruz at instructs in 2020, then worked with him again at a camp in the Dominican Republic in early 2021, and then they were together at Pirate City from Spring Training through the end of the 2021 FCL season. He informed me that Cruz was working through some mechanical changes as the 2021 season was going along.

“As far as direct time with him I did some delivery analysis and help with programming,” Black said. “Big target has been stability of drive leg and he simplified his hand break.”

Any mechanical changes in season could lead to poor results as the pitcher works through them. That doesn’t take away from the results we saw, but the goal with any developing pitcher is where they end up, and they don’t all get there the same way. Black had a lot of praise for Cruz’s work ethic and smarts, twice mentioning that he was a very bright pitcher, who is never happy with status quo, always striving to get better.

I asked a pitching coach from another team to look at video of Cruz and give his thoughts on the delivery and pitches. This is what he had to say:

I can see a lot of herky jerky, but he gets his body in a position to throw. Crisp fastball with a sharp slider and looks like a slurve. Couldn’t tell from the one angle but may have a developing CH. Works the breaking ball off the high FB well. Attacks the zone without fear. Love the style and flair.

When I did that article last week looking at the best pitchers by age, I put some thought into naming Cruz as the best 18-year-old in 2021, mostly because of his stats. I feel better about my choice now than when I made it. The upside is still there, and to quote Victor Black “He is quite the arm. Cruz will be a piece.”