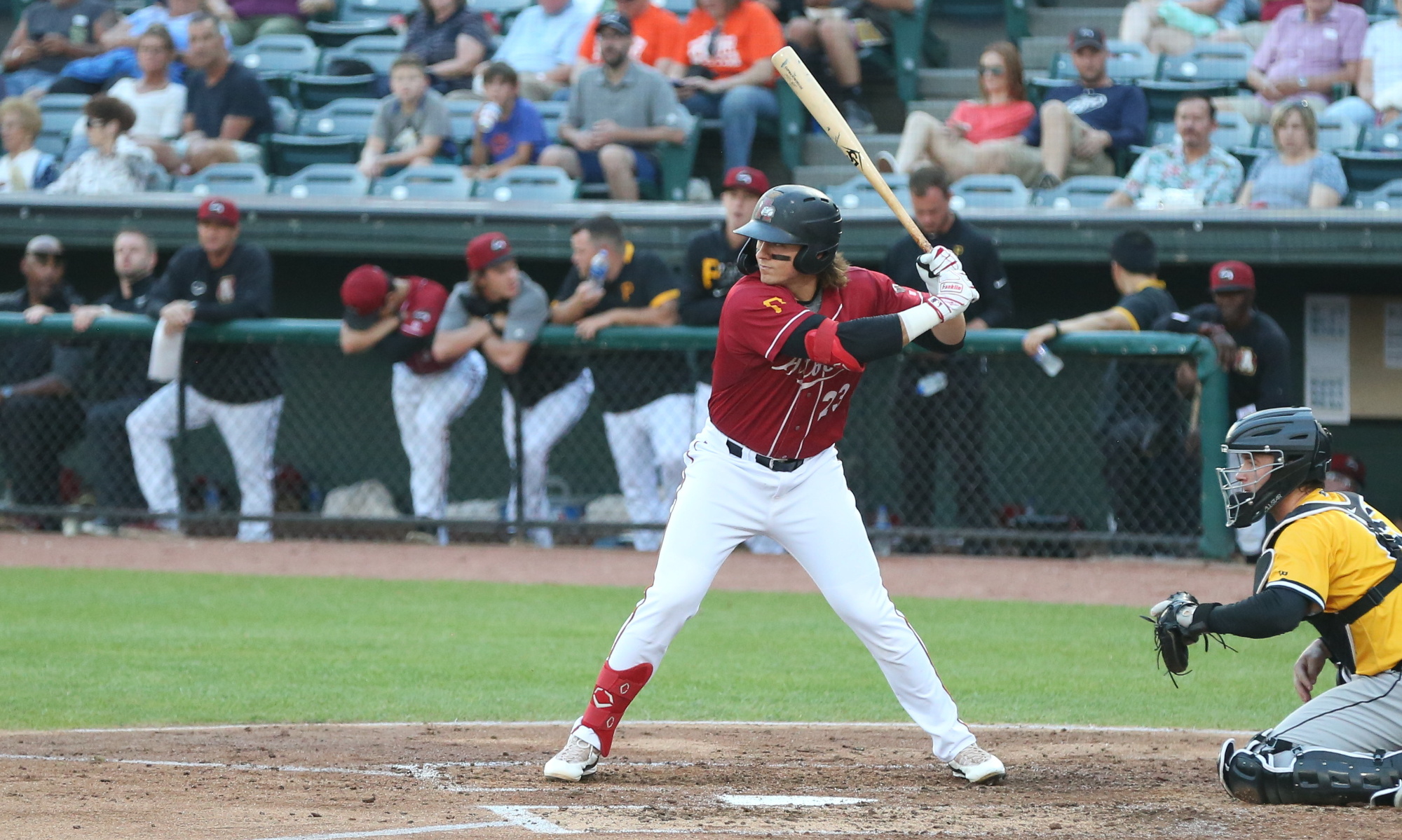 In a long conversation about baseball, Mason Martin will casually drop quotes from some of the greatest hitters in the game on the art of hitting.

The Pittsburgh Pirates first base prospect is the hardest worker in the organization, per the opinion of his manager Miguel Perez.

“He doesn’t take days off of baseball,” Perez said. “You have a hard time disconnecting him from baseball, which is great. He’s a guy who comes here on days off and gets work in the cage and he takes care of his body really well.”

Perez would know better than anyone: He’s been Martin’s manager for almost his entire career. The two first met in the Gulf Coast League, where Martin got a lot of attention with 11 home runs in 127 at-bats in the very pitcher friendly league. Martin established himself as a hard worker from the start, constantly reviewing and trying to improve upon mistakes, even when the numbers were so impressive.

“That was his way to let them know that he could do this, because he didn’t know he would have another three levels,” Perez said.

Martin did have more time ahead of him. He went to Bristol in 2018, where he started to study pitchers more. In 2019, Perez said he added conviction to those studies, and incorporated more of a thought process into his game. The two were together in 2021 in Altoona, and are likely to be reunited again in 2022 in Indianapolis.

The biggest appeal from Martin has been his power. He has 85 home runs in 1416 at-bats in the minors. In his last two seasons, he’s combined for 60 of those home runs, with 25 coming in 2021 between Double-A and Triple-A.

The biggest downside from Martin has been the strikeout totals that come with his power. Throughout his career, he’s struck out a third of the time, while seeing his walk rate decline as he moves up to higher levels. He’s hitting for enough power in the minors to have value as a three-true-outcomes player. That hitting profile isn’t a guarantee to carry over to the majors.

Martin either needs to reach the majors with no drop off to his game, or he needs to figure out how to reduce the strikeouts — an issue that will only get more difficult in the majors.

I won’t say which one seems more likely for the 2017 17th round pick out of Kennewick, Wash. I will note that Martin isn’t going to settle for being an incomplete hitter.

“I think at the end of the day, what I’m focusing on now is certain areas of my game that need to be addressed and need to be worked on to become a complete player,” Martin said. “That’s my goal. I don’t want to be the guy who goes up there and it’s either a home run or an out. I want to be a dominant hitter, a hitter that is always a threat in every situation, and can always influence the scoreboard, but will also take his walks if you don’t want to pitch to him.”

The biggest area that Martin is addressing is making good decisions on pitches, and getting his best swing off when he gets his pitch. The first step to that is increasing good takes and avoiding bad swings, which increases Martin’s chances of getting a good pitch.

“I know Ted Williams said that the first rule of hitting is get a good ball to hit,” Martin said. “That’s often the most forgotten rule of hitting, because a lot of people are focused on other things – their swing, what the pitcher is trying to do to them. At the end of the day, if you just wait for a good pitch to hit, and when it shows up you’re good at barreling that pitch, I think that’s where the growth is. Just making better decisions on a pitch.”

That’s something that is easier said than done. Perez feels that the strikeouts won’t be a big issue, and feels Martin just needs more upper-level at-bats. Still, it’s hard to overlook such high strikeout rates. There have been noticeable changes, beyond just recognition skills.

Martin worked on his swing in Altoona, at first shortening it, then opening it up a bit after realizing he was too stiff with the shortened swing. Anthony Murphy has a breakdown of Martin’s swing progression, along with the way he was pitched throughout the year. He also stood further back in the box, letting the ball travel further.

“Tony Gwynn said the farther back on the plate you let the ball get, the less chance for error there is,” Martin said. “I’ve been taking that to heart and working on that a lot recently.”

Martin is always studying or working on something with his game, including watching hitters with comparable swings. That includes Salvador Perez, who is a right-hander batting opposite side of the left-handed Martin.

What Martin learned in his first trip through the upper levels of the minors is that it’s not all about physical changes, or pitch selectivity.

Martin has a few years of experience now, and has used that time to fill his brain with knowledge about the game — whether that’s studying video, recapping his mistakes, or just getting experience on the field.

“I think there’s a lot to be said about what you focus your thoughts on, and when your subconscious mind takes over when you’re on the field,” Martin said. “All the reps that I’ve taken, all the at-bats and ground balls hit at me, those are now in my subconscious thoughts. I don’t need to think of those memories to access them.”

There’s been a new approach by Martin over the years to review the moments in the game. In his early pro years, he would go home from an 0-for-4 day and put off reviewing what went wrong until the next day. This kept him focused on the previous day, rather than looking ahead to the next pitcher. Now, Martin goes back home each night, writes down his notes from the day, and when he wakes up the next morning, his only focus is on the game that day.

Still, Martin can only do so much to prepare, or to review. When it comes down to the game, he’s left with his instincts, and his plan to stay within his game.

“I think it’s impossible to master the game of baseball,” Martin said. “There’s so many variables that you’re going to see something new all the time. I want to master this game as much as I can. The only way to do that is to learn from what I’ve done and learn from what others have done. I try to watch and think about the game a lot, but when I step in between the lines, it’s just play baseball. If you try to think and cross-check your thoughts with past experiences, you’ll just end up getting in your head and getting in your own way.”

His work at first base has continued with Gary Green, who was the Altoona bench coach in 2021, will be the Indianapolis bench coach in 2022, and has worked with Martin since the beginning. While Martin’s goal is to be a reliable first baseman for his infielders, his value will ultimately come from his ability to hit for power, without losing too much value from strikeouts.

At the very least, Pirates fans can hope that he just maintains that three-outcomes approach that saw him hitting home runs off the rollercoaster beyond Altoona’s right field. The Skyliner isn’t the only target that Martin has in mind.

“Pittsburgh has a lot of fun targets,” Martin said. “That Allegheny looks fun.”