The Pittsburgh Pirates announced most of their Player Development Staff for the 2022 season, with some new names that we have already heard about, along with some changes for holdover coaches. Here’s a look at the list sent out by the Pirates: 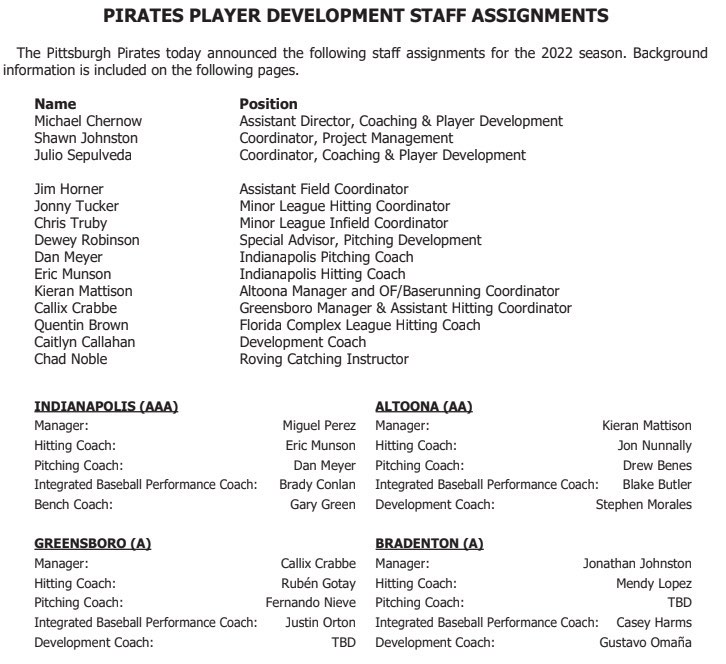 Indianapolis has an entirely new coaching staff, though not all of the coaches are new to the system. Miguel Perez moves up from Altoona to manage. Eric Munson was just recently hired and his signing was covered here. Dan Meyer was also announced here after he was hired last month. Brady Conlan was a coach with Bradenton last year, while Gary Green has been in the Pirates system forever in various positions.

Altoona gets Kieran Mattison as manager, as he continues to move up the system after getting bumped to Greensboro last year. Jon Nunnally was the hitting coach in Indianapolis last year and he was with Altoona in 2019. While it appears that he got demoted, coaching changes don’t exactly work the same way and player movement in the system. Plenty of coaches have moved down because they fit better with a group of players at certain points in their development. Drew Benes was with Altoona last year, and he’s in his sixth season with the Pirates. Blake Butler also moves up from Greensboro, and Stephen Morales has been a manager in the lower levels of the system in 2019 and 2021.

In Greensboro, Callix Crabbe is a new coach who was announced recently, coming over from the Texas Rangers, where he was an assistant hitting coach for the last three years. He played briefly in the majors, and has been in coaching since his playing career ended. Ruben Gotay returns as the Greensboro hitting coach. Fernando Nieve has been a coach for four years in the system, including the Bradenton staff in 2021, so he moves up with many of those pitchers. Justin Orton has been coaching in the Dominican for the Pirates during the last two years. TBD is the new Development Coach (and pitching coach for Bradenton, which will be tough to do both!).

Jonathan Johnston returns as the Bradenton manager after leading the team to a league title. Mendy Lopez has been with the Pirates working in the Dominican since 2014. He’s a former Pirates player as well, seeing time with the 2001-02 teams. Casey Harms was the hitting coach for the FCL Pirates last year. Gustavo Omana coached for Indianapolis last year, and has six years of experience as a hitting coach.

The new hires among the roving development staff has mostly been covered here. Dewey Robinson and Chris Truby are two noteworthy names due to their experience. Caitlyn Callahan made the news as the first female in-uniform coach in franchise history. Quentin Brown has a lengthy resume of coaching experience, but this is his first time in pro ball. Chad Noble joins the Pirates from the Cubs, where he was their bullpen catcher for eight years. The first five names you see on the list pictured above are all returning coaches.

The Pirates Could Have an Outfield Logjam...

Pitch Framing Is Still A Point Of...

The Pirates Are Slowly Stabilizing Their Roster