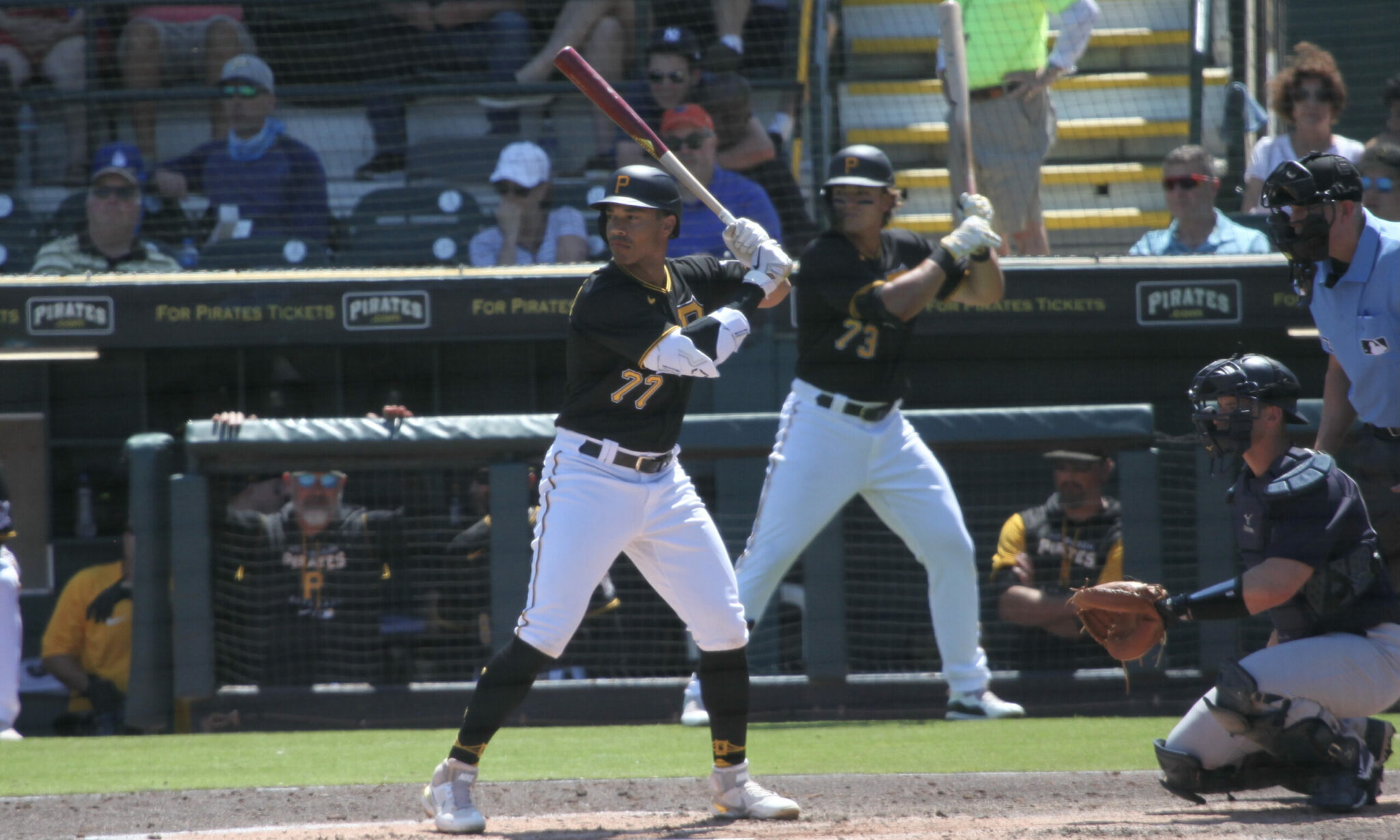 When looking back at the 2022 season, the lockout may turn out to be a blessing for the Pittsburgh Pirates. With no Rule 5 draft, the Pirates won’t have to risk losing any of the prospects they didn’t protect by adding to the 40-man roster.

One of those players they are getting an extra year of evaluation on will be 2017 second round pick Cal Mitchell.

The 23-year-old native of California has taken the gradual progression throughout the system, with stops at then Low-A West Virginia in 2018, and Bradenton (High-A at the time) in 2019.

It was an aggressive push for Mitchell who was nearly 2.5 years younger than the competition at each stop.

Mitchell’s first full season could have been considered a success, especially considering the age factor. With West Virginia, Mitchell owned a batting slash of .280/.344/.427 with 10 home runs and 42 total extra-base hits.

Playing at 19-years-old at the time, Mitchell struck out just 22% of the time, a very acceptable mark all things considered.

Once he got to Bradenton, it looked as if Mitchell was trying to sell out for more power — he did increase his home runs but hit overall less extra-base hits. He also saw a 30-point decrease in his batting average and struck out at a much higher clip (28.8%).

When minor league baseball returned in 2021, Mitchell was assigned Double-A Altoona, before getting a quick look at Indianapolis.

In total, Mitchell batted .279/.328/.423 with 12 home runs. He saw his extra-base hit total drop for the third straight season, but it was overall one of his better years in the minors.

Mitchell decreased his strikeout rate under 20% (17.0%) and posted an above average wRC+ mark of 106 during his time at Altoona.

One August 24th Mitchell recorded a five-hit game against the Richmond Flying Squirrels, scoring a run and driving in five himself. Amazingly, he recorded a hit in each of the first five innings played, as the Curve rolled to 16-5 victory.

This game highlights Mitchell at his best, he just hits, and can use the entire field to do so.

He spreads all five hits across the field. His first hit was a bloop single to left field, followed by spreading the ball all over the outfield.

Mitchell did a great job in that game leveraging the count into his favor, even do so much as working an 0-2 count back even before recording his third hit of the night.

Next up, instead of highlighting certain at-bats, here’s a look at an entire series from Mitchell against the Hartford Yard Goats.

In that series Mitchell went 8-for-18 (.444) with five runs scored, three home runs, and a double. He didn’t walk, but also only struck out twice in the series.

The Curve opened the series with a barrage of runs, including four home runs — two by Mitchell.

At this point he may not be known for his power, but he did make those two home runs look very effortless. You get a great side view on his second home run that shows him loading up and how quickly his hands get through the zone.

You can also see some of his struggles against lefties. While you don’t usually see many bad swings from Mitchell, he will have to improve on his hitting against lefties to be more than a platoon player at the next level. There was nearly a hundred-point difference in his average against righties (.301) than lefties (.211). The OPS splits (.555 vs lefties, .822 vs righties) were also pretty telling.

Mitchell was eligible for the Rule 5 draft this year, but wasn’t protected, and could have been selected if it wasn’t canceled due to the lockout.

If he can take another step in his development, the Pirates may have dodged a huge bullet.

He has a steep mountain to climb to make it to the majors this year, even if he is projected to start the year in Indianapolis, where he finished 2021.

The Pirates currently have eight natural outfields on the 40-man roster, and that isn’t including the likes of Cole Tucker and Hoy Park who have the versatility to play there as well.

That also includes some of the team’s prospects, including Canaan Smith-Njigba, Travis Swaggerty, and Jack Suwinski, who are now more likely to get a shot before Mitchell due to being on the 40-man.

Mitchell has lasted longer in camp than Swaggerty and Suwinski, but as a non-roster player, it isn’t likely he makes the team.

Beyond Bryan Reynolds, the Pirates have a lot of questions in the outfield, and they’ve kind of set up the roster to be able to rotate through multiple options throughout the season.

Double-A is usually the big test for prospects, and Mitchell had his best hitting season as a professional, despite the decrease in power.

It’s hard to predict who what the first roster need may be outside of the 40-man roster, but if the Pirates just need someone who can hit, Mitchell should be high on the list.

The Pirates Have Built Up An Impressive Group of Catching Prospects

How Often Do the Top Minor League Hitters Make it to the Majors from Each Level?