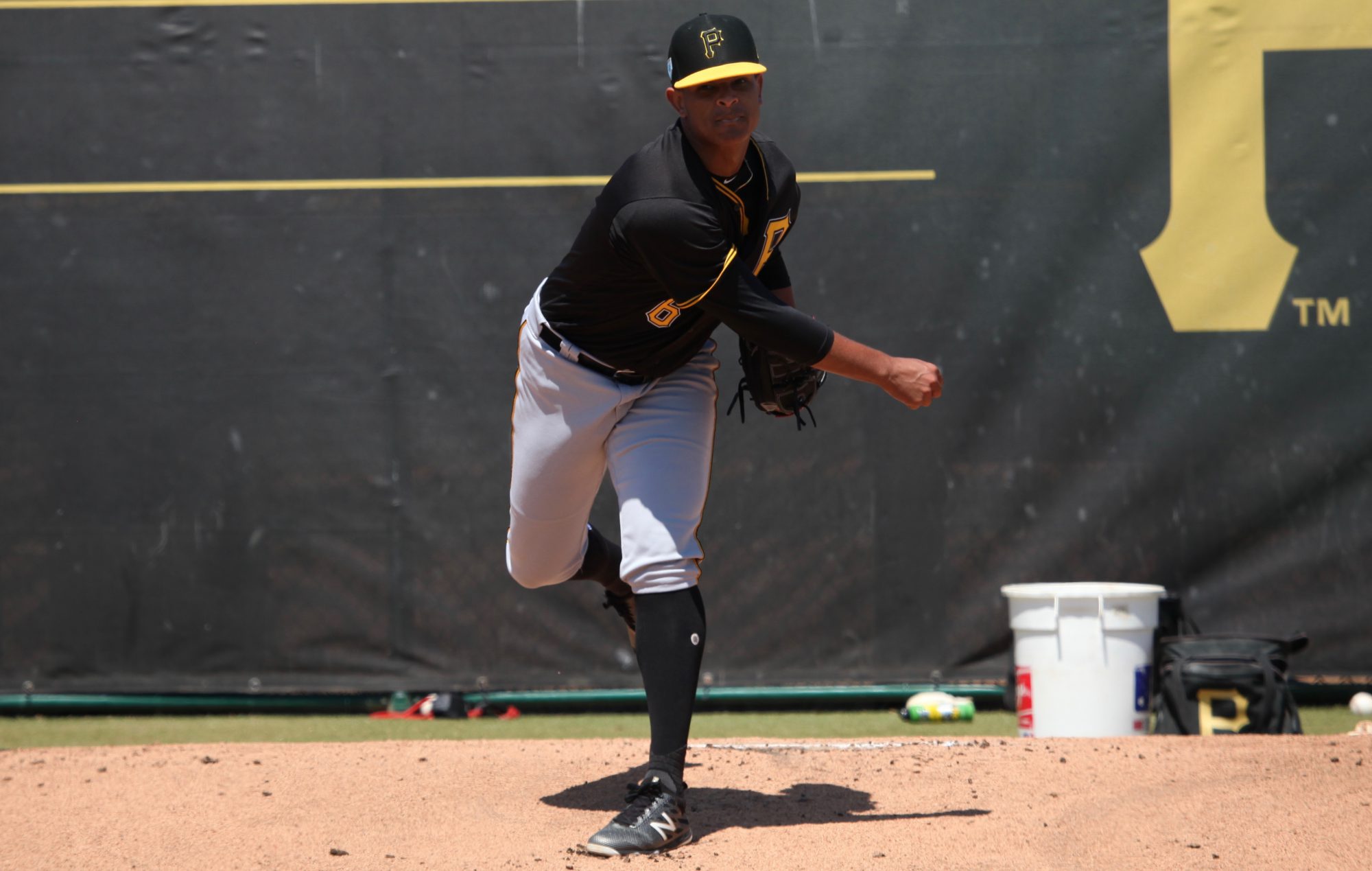 You won’t find the name of Altoona reliever Noe Toribio on any top 30 prospects lists for the Pittsburgh Pirates.

Despite that fact, he’s putting up some nice results during the early parts of the season with the Altoona Curve. The 22-year-old right-hander has a 2.66 ERA in 20.1 innings over eight appearances, with a 1.03 WHIP,  a .183 BAA, and a 26:8 SO/BB ratio. This has been working a piggyback role with starter Luis Ortiz this year, in which Toribio is getting multiple innings every outing.

Toribio isn’t just plugging away with what got him to this level. He has made some recent changes of note.

How We Got Here

Toribio received a six-figure bonus from the Pirates at 16 years old in 2016. At one point we received reports that his fastball hit 97 MPH. Later views had him topping out at 94 MPH, which was still good considering his age and the potential to add more as he filled out his 6’2″ frame. While his bonus put him on the radar, that was back when the Pirates would spread around six-figure bonuses to pitchers without going  too high for any of them (except Luis Heredia of course). He stood out among that group when we got the velocity reports. He didn’t really make a great impression until he got to Morgantown in 2019.

Toribio was 19 years old in 2019, playing in the New York-Penn League with a lot of recent college draft picks. That was the first time I saw him and I was impressed. I watched all of his games that year until he got promoted Greensboro, where I believe I saw him pitch twice. He threw a sinker that ran down and in to right-handed batters and the offering received some of the worst swings you have ever seen. I’d see guys swinging like the pitch is right down the middle of the plate and the catcher would receive the ball in the back of the batters box just off of the ground. His breaking ball wasn’t bad either, and he had the makings of a changeup. Between the velocity reports, his age, and the poor swings from opposing hitters, Toribio had the makings of a potential high upside pitcher at that early point in his career.

The 2020 season getting canceled made things difficult to judge with prospects. We had no idea how they would progress on their own. There was a good sign for Toribio going into 2021. He had just seven starts in Low-A in 2019, but he was being skipped to Altoona for 2021. He started off okay considering his age/jump/down time, but things went south in his last start, allowing five runs in 3.2 innings, which was followed by him missing almost two full months due to forearm soreness. He then he went to the bullpen when he returned. It got lost a bit in the role he had late in the year, but he finished 2021 by allowing two hits and no earned runs in his last 10.2 innings over four appearances.

Where We Are Now

That brings us to this season, as we already looked at the stats, so let’s check some video. This is his outing from May 1st:

Toribio is throwing four pitches there, but you’re seeing a lot of sinkers. I watched this game waiting for a right-handed batter to come up so I could see how more experienced hitters handled that riding sinker. One of my concerns with the early Toribio was the fact that he was getting results without throwing the ball in the strike zone. It’s not unusual to see a pitcher succeed at lower levels with certain pitches that just don’t work against better hitters because they don’t chase as much. It appears that those same concerns have caused him to attacked hitters with a different approach because I haven’t seen that riding sinker in later views either.

Here’s hit outing from May 11th:

Anthony also posted his May 7th game, which is being saved for now, but it’s similar to this video for the point I wanted to make. Toribio is throwing more of his four-seam fastballs, attacking the left side of the plate to right-handed hitters, which is basically the complete opposite approach to the 2019 version. There were some hard hit balls in this game, but he also got some great defense from Connor Scott, which helped limit the opponents to two hits. That’s interesting to note, because he pitched again on Sunday and there were no hard hit balls, yet he gave up two runs in two innings.

That Sunday start also saw him scrap the changeup he was throwing and replace it with a splitter. That’s going to be something we look at in the future when we can get better video of the pitch and compare it to his previous changeup.

Where He Goes From Here

The future for Toribio is interesting to look at now because he’s having success in Double-A. If you carry it back into last year at the end, his ERA is 1.74 in his last 31 innings. The four-seam fastball is 90-92 MPH, so he hasn’t regained the early velocity and he’s not going to blow anyone away, but it’s a different look than his other three pitches.

The results over the last two games show that the opposing batters are mostly putting his four-seam fastball into play. That might help explain why he is throwing the pitch more often, and worked the left side of the plate more as well. I saw him yank a lot of those pitches, missing badly, so the pitch needs some work. That gives him two pitches that are going to need to see more game action. While he seems a bit more polished than in the past, there’s still plenty of work to be done.

Toribio’s sinker still has excellent movement and gets solid results, but we are talking about a pitch that is 84-86 MPH. In fact, all three of his pitches that aren’t the four-seam, are all in the same range. I was tracking every velocity for the multiple starts in which is was available, and he had a ton of pitches in the 82-86 MPH range. You’re just getting different looks with the sinker, slider and splitter.

To me it doesn’t appear that Toribio has the starter upside that I saw earlier in his career. That might not matter, because the multi-inning relief role is becoming more common, and the Pirates have seen some effectiveness out of that role recently. If you have someone throwing four different pitches and they are only going through the order once, you can limit the usage of ineffective pitches that day, or just use them as “show me” pitches, so batters don’t sit on one pitch. The sinker is his bread and butter pitch, and he throws it for strikes now without relying on chases. The only sinker that did any damage to him in five innings last week was a ground ball single that found a hole. His real upside will be decided once we see how he commands his four-seamer in the future, and how well he does with his new splitter.

Thanks John: Watching the video from May 11, it would be hard to get set for anything from this kid. Sinkers dropping down and out of the zone, pitches running away from a LH batter and then when you think you know what to look for he throws a backdoor curve to the outside corner. And I am sure that runner away from lefty’s would start off the plate and run to the outside corner to a RH batter.

And, most importantly, he looks like he is throwing with a lot of confidence in the pitches he is throwing. I think I commented yesterday about the quality of RP’s at AA and mentioned Toribio, Zach Matson, and Colin Selby.

I posted an article on Selby in the off-season about the improvements he was making with his pitches, so it’s good to see him turning that into early season success.