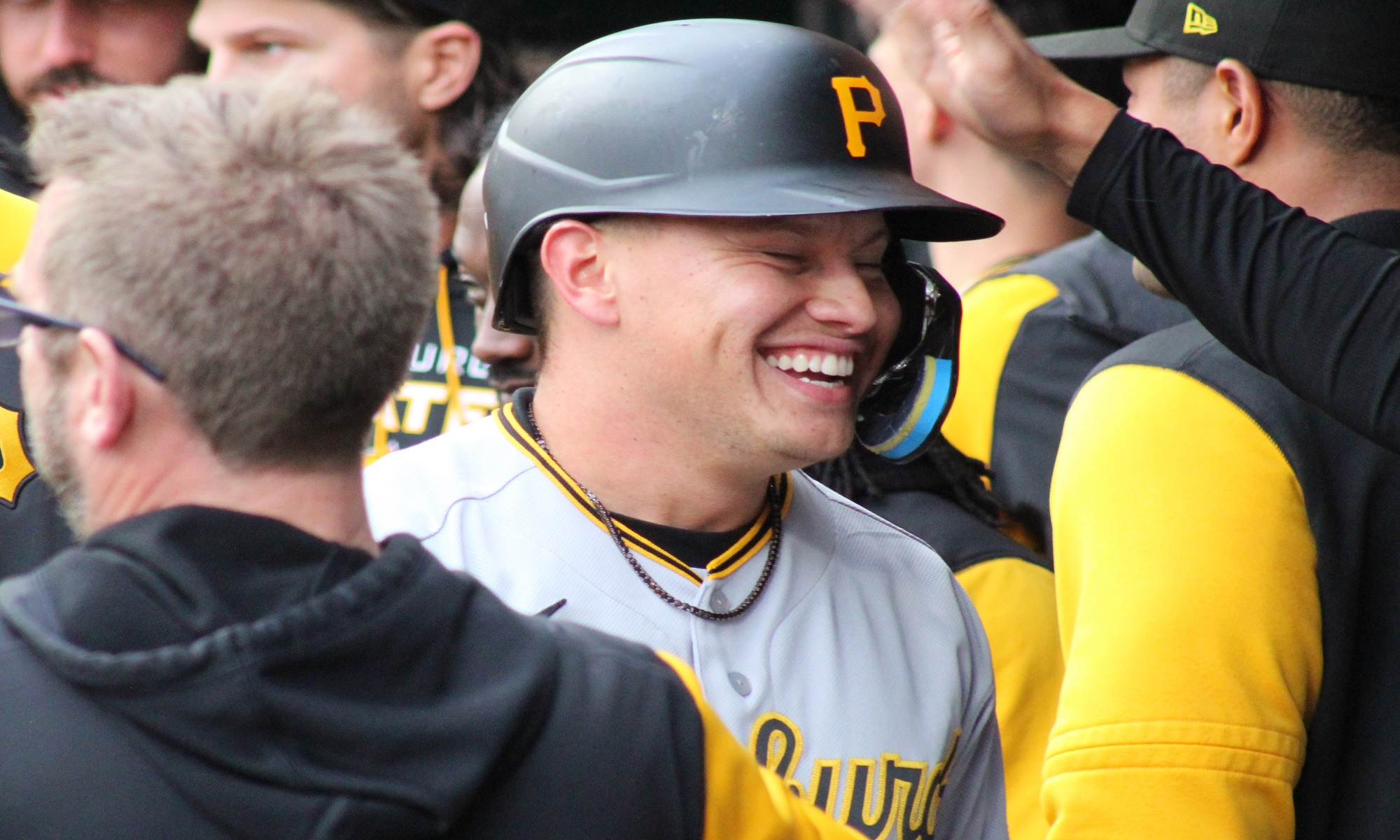 CINCINNATI – Diego Castillo cannot see the future, but he is very in tuned to his skill set and his body.

In talking with Castillo on Friday afternoon, he felt the turnaround to his season coming imminently.

“I feel comfortable,” Castillo said. “At some point, probably starting today, some good things are going to happen.”

Unfortunately, the Friday game was postponed. However, in the doubleheader the next day, Castillo went 3-for-7 with his second home run of the season.

Castillo got off to a hot start in Spring Training and forced the Pirates to keep him on the roster to start the regular season, if there was any debate to be made. In the Spring, Castillo hit six home runs and went 13-for-35 with 12 RBI.

However, when the bright lights turned on, Castillo admitted that excitement got the best of him. He said that this led to him being over-eager and chasing pitches he never normally would have.

He said that there were times that he was chasing a home run as well to get him going. Castillo said that his mind has slowed down and now he knows this current situation is the same baseball he has been playing his whole life.

“It feels the same [as in the Spring],” Castillo said. “I have been hitting the ball really well. I am just hitting the ball straight at the defense sometimes. To be honest, the couple first few games, I was trying to do too much, because I was all excited to be in the big leagues. After a few games, I fixed that and I feel comfortable again.”

One aspect of the game that did not take any adjustment for Castillo is his defense. Castillo has already played five different positions in 23 games. He has played nine straight games at shortstop entering Monday. There was also a stretch where he played six of seven games at second base. He has seen action at third, right field, and even appeared as a pitcher.

Despite being moved all of the field, Castillo has played well and said that he feels comfortable with fielding either a ground ball or a fly ball.

“With the defense, I feel great,” Castillo said. “All of my life, I have been doing well on defense. In the big leagues, I don’t feel any pressure or anything different [on defense] than in the minor leagues.”

This defensive versatility and willingness to play wherever he is asked has certainly caught the attention of Pirates manager Derek Shelton as well.

“Diego continues to do a good job,” Shelton said. “We’re asking Diego to play some shortstop, which is probably his third position and a little bit uncharacteristic. He has handled himself really well.”

Castillo fits the Pirates mold perfectly of a versatile defender, who can play all over the field. If the bat picks back up consistently, Castillo could be a fixture in the lineup every day.

PSA: Go to your account page in the menu to update your avatar.

The kid is a bulldog. His mindset says big-league-starter.

play the kids! it ain’t that hard

If this new look means you’ve replaced Hyvor, thank you. They kept saying my email address is invalid. My contacts with them got me nowhere.

It does mean that.

I second that. THANK YOU!

I probably wouldn’t be watching these games if it weren’t for ‘Diego’ and ‘Jack’ starting most games. This pitching staff is hard to watch as it is and throw in Shelton’s mismanagement of it.

Chavis has been playing decent as well. There are few bright spots to watch but there are a small handful.

I’d add Ke’Bryan and Bryan, plus I tune in to see Keller and Brubaker when they’re starting. But yes, it’s the young players that make watching interesting.

Now, a comment on the meat of the article. This is why I want them to just release the deadweight, and start letting some prospects acclimate to the majors. But their plan appears they’re going to let all of 2023 be the year prospects take their bumps and bruises, thereby making 2023 season a wash.

I don’t think so. I think they’re trying to give them enough time to figure it out since it was an abbreviated ST. If they’re still playing Tucker, for example, after Super 2 passes and he still isn’t hitting his weight, than I’ll willingly eat crow.

Martin, Mitchell, Castro…who is up next. (Mitchell is my guess, then Castro when Tucker finally runs out of rope)

I think they are more likely to call up Castro before anyone else, because he is on the 40-man. If Swaggerty would start hitting he might be called, but he is not hitting, and now he is on the IL. Down the road, I could even see them calling up someone like Smith-Njigba if he started hitting. Also, Suwinski is holding his own. As long as Suwinski does not seem overmatched, I think the Pirates are satisfied, and will stick with the Gamel, Reynolds, and Suwinski outfield. They will not bring someone else up unless he can get regular playing time.

Once Roberto Perez comes back they will probably DFA a catcher, which would open a spot to bring up for someone like Mitchell to be added, but until then, I doubt they have someone they would want to DFA, unless it was Van Meter, or someone has serious injury. The one possibility is if Perez is out awhile, they could add him to the 60-man to open up a spot, but I think they still will want to be sure about Mitchell before adding him to the 40-man, because do not want to send him thru waivers.

Any position players they call up before July will quite probably need to already be on the 40-man, unless there was a long term injury.

I think they could still call up another OF in the meantime. First off cause they need to stop with the whole super utility IF playing in the OF, and not being good at it. Reynolds and Gamel will need their time off as is, plus I’m sure they’ll want to give Suwinski plenty of rest as to not burn him out playing the rest of the full season.

Should be Contreras than Cruz before any of those three you mentioned.

You’re right about Contreras but Cruz needs to hit a bit better than his weight before he’s ready to come up.

again – not talking pitchers, and Cruz needs to recognize pitches below his knees.

it seems alldred was called up?

right – I was looking at position players . I think Gamel, Tsutsugo, Tucker, JVM will all be elsewhere by August 1st. Will be interesting to see if Nick Gonzales gets “lapped” this year.

I doubt you see Gonzales this year in Pitt. He is not hitting now. Even if he turns things around by Sept., I doubt they would call him up like Cruz. Probably wait until next year at the earliest. I think that if they did what they did with Cruz, reward them by giving them a cup of coffee in the majors, there might be a better chance of them doing that with Davis this year. Assuming he keeps hitting AA the way he did in A+, and he has gotten off to a good start. If Davis keeps hitting in AA, they might be inclined to bring him up in late Sept.

Gonzales is in danger of falling off “prospect” status totally. He looks lost.

I’m still optimistic that by July we’ll have a starting lineup that consists mostly of players who can be an important part of the future: Hayes, Cruz, Castillo, Castro, Reynolds, Suwinski, Mitchell with three of the starters being Keller, Brubaker, and Contreras. Maybe Martin too, and De Los Santos in the pen. That would be a fun team to watch even if they didn’t get a lot of wins.

You will not see Cruz and Contreras until they reach Super 2. As much fun as it is to see them now, it really makes not sense to bring them up now and lose a year of them, for an extra month of seeing them play. I do not like the rule, but if it exists, the Pirates would be crazy not to take advantage of it.

Contreras, especially would be up now if not for Super 2, but it is what it is, and nothing we can do. I could see them calling up Castro at some point. Right now might be a good point with Newman out, and Castillo playing ss, but they would need to be willing to make a move like optioning Tucker to AAA. Mitchell and Martin will probably be given a lot of time to fail in AAA before they would add them to the 40-man. Would not be surprised to see them call up Yerry at some point. They may just wait until there is an injury. There are always pitcher injuries. They may wait until one comes along and then call him up. They will still want to make sure they are not going to send him back before adding to the 40-man.

Yes, fully agree. Give Diego and others a chance to see if we have something here.

Agreed. Give up the hoarding of controllable years, bring ’em up and let ’em play!

It is not hoarding when it is the rules. Six years from now when they are preparing to trade Cruz and Contreras before becoming free agents, everyone will be criticizing them because they did not wait a month to bring them up in a season that they did not play .500. It makes no sense to bring them up before they reach Super 2. I wish they had gotten rid of the Super 2 rule in the new CBA, but it still exists, and we should take advantage of it.

Testing on mobile, and so far, MUUUUUUUUCH better