Luis Ortiz Has a Lefty Problem 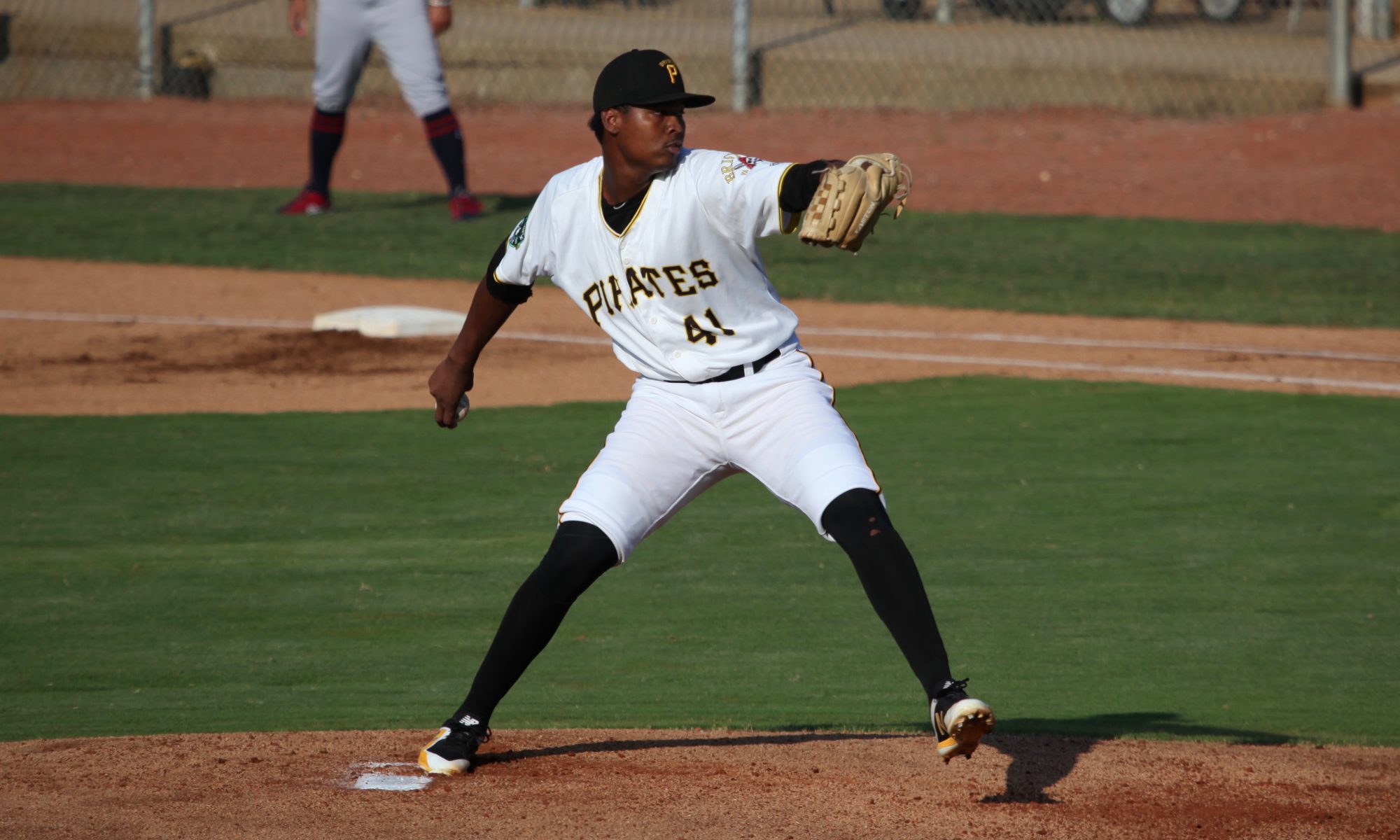 This week I’ve been focusing on the Altoona Curve, and on Wednesday, I had a chance to focus on right-handed pitcher Luis Ortiz, who is our 28th ranked overall prospect in the system, along with the consensus 26th best prospect among all rankings. Below is a report based off that 5/4 start from Ortiz.

The Pirates signed Ortiz for just $25,000 in 2018. He was older when he signed, and ended up getting an aggressive push to Bristol in 2019, skipping over the Dominican Summer League and Gulf Coast League (now the Florida Complex League) entirely.

That push continued last year, when Ortiz pitched out of the Bradenton rotation, posting a 3.09 ERA in 87.1 innings, with an 11.6 K/9 and a 2.9 BB/9. Once again, the Pirates gave him an aggressive push this year, sending him to Double-A after the Low-A success.

Ortiz mostly works off a fastball/slider combo, with both pitches having a lot of movement, but neither having any consistency with the movement, or any control of where they will end up.

There was no velocity in this game, but it wouldn’t have mattered, as most of the stuff from Ortiz was either out of the zone or induced contact. In the past, Ortiz has been as high as 98 MPH with his fastball, mostly working in the 92-93 range. The pitch has some horizontal movement, cutting back arm-side for the right-hander.

Unfortunately, Ortiz has some issues with working the fastball inside to lefties, which I’ll get to later. A bigger issue is that his fastball isn’t a swing and miss offering. At best, it can induce weak contact. At worst, you get a start like Wednesday, where Ortiz can’t get anything by opposing hitters.

The slider is a wipeout pitch that starts high in the zone and drops off the table when executed properly. It’s mostly a chase pitch. Ortiz did well with it against hitters who were more aggressive early in the count, but he rarely got into deeper counts to allow the opportunity for hitters to chase the slider.

Below are examples of some of the better pitches from Ortiz in this outing, with the effects of that fastball tailing high and inside to right-handers.

I'm breaking down Altoona starter Luis Ortiz today on @pirateprospects, after watching his start this week. It wasn't a good outing, and I'll break down what went wrong, but to start, here are a few examples of the better pitches from Ortiz. #Pirates pic.twitter.com/pJhRzgHKdB

That ball went for a hit up the middle, but that kind of weaker contact jamming a right-hander won’t consistently go for hits. I didn’t see Ortiz get in many situations where he could set up and then execute that plan, but it seems to be his best attack approach, considering his stuff against lefties.

Without looking at the numbers, my takeaway from this start was that Ortiz would struggle against lefties.

Statistically, that hasn’t been the case. Ortiz has a .527 OPS against lefties in this young season. That’s a bit of a mirage though. It breaks down to a .194/.333/.194 line. The at-bat below against Parker Meadows (younger brother of Austin) demonstrates the problem.

Luis Ortiz struggled against lefties in this game, particularly on hitting that inside edge of the plate. Here is Ortiz against Parker Meadows, younger brother of Austin, demonstrating that issue. #Pirates pic.twitter.com/OcV87m6Tz9

Ortiz starts with a slider that doesn’t get a chase as it drops away from the bunt show from Meadows. He mostly sticks to the inside with his attack, but the result is one of two things: A foul ball on anything close, or a miss inside for a ball.

A big problem is that Ortiz has so little room for error with his fastball movement. The pitch tails back so much to his arm side that it runs right into the barrel of a left-hander if he misses that inside corner by just a bit. If he misses a bit to the other way, it’s a ball. And he doesn’t get the same movement on the pitch on the edges as he does throwing it down the middle, making it easier to pick up and make contact against.

Statistically, Ortiz did okay against lefties last year in A-ball. He had a .708 OPS, compared to a .599 OPS against right-handers. Lefties got on base at a .342 rate against him, and his walks and hits were up, while the strikeout rate was down compared to right-handers.

I think what we’re starting to see is that Ortiz doesn’t really have anything to attack lefties with. Here is another at-bat from the third inning, in which Ortiz gets a bit frustrated that he’s not getting that inside call.

By the third inning, Ortiz was getting a bit frustrated, especially after missing a pitch just off the inside of the plate against another lefty. He issues the walk here working away, on a pitch that runs out of the zone. #Pirates pic.twitter.com/fZOtvhtLtK

Catching prospect Carter Bins tries to calm Ortiz down, but runs into a bit of a Tin Cup situation almost, where Ortiz tries to hit that inside corner two more times, missing worse in each of those attempts than the first two pitches, and getting into a 3-0 count.

After this, Ortiz walks off the mound and composes himself, then throws a fastball that starts over the middle and tails a bit away. If it wasn’t a 3-0 pitch, it might have been easy to hit for the batter. The next pitch attempts the same thing, but with more movement that takes the pitch out of the zone.

That 3-0 pitch is not what you want to attack with. The 3-1 pitch missed the outside edge when the pitch ran too much. On both sides of the plate, Ortiz runs into trouble where he can’t hit the edges, but runs the risk of leaving the ball over the middle if he misses with his control.

Ortiz got on our radar due to his size, velocity, and the fact that he handled the lower levels well after an aggressive push. It appears that the continued aggressive pushes have placed him at a level where he faces a career-defining challenge. He doesn’t have a swing and miss pitch in the zone against either side of the plate, and is going to see fewer chases.

He could maintain a high strikeout total in Double-A, but it will come with a higher walk total and a higher ERA, as those strikeouts would be the result of pitching around the edges with poor control, and ultimately having to throw strikes eventually and induce contact.

What makes his struggles worse are that he appears to be pitching around lefties. That’s not intentional, but he has so little margin for error. Inside pitches are either a ball, or tail right over the middle of the plate. When he executes that inside corner, he doesn’t miss many bats. The pitch away either doesn’t move off the middle of the plate enough, or moves too much and misses outside.

Ortiz works best when he’s jamming hitters up and inside on either side of the plate, or getting them to chase his slider dropping out of the zone. Unfortunately, he doesn’t get into many favorable counts to take advantage of these pressure pitches, as the early pitches either miss the zone or make contact. On Wednesday’s start, Ortiz got just three swing and misses on 66 pitches. That’s not a rate that will get him ahead.

In order to make it beyond Double-A, Ortiz will need to find a weapon against lefties. He might be better off right now as a long-reliever, stacked against a string of right-handers. However, that’s a strategy that can be derailed by one left-handed pinch hitter early in that line. Moving to relief might help him with his velocity playing up, and possibly giving him a more difficult fastball to hit. However, he would need to learn to control the pitch in the zone consistently for that to work.

Here is the data from today’s MLB game https://baseballsavant.mlb.com/gamefeed?gamePk=662301

For example here is the 2021 Bradenton data http://www.minorleaguesplits.com/mls/cgi-bin/team.cgi?team=Bradenton&bp=adv_batting

The pitch-by-pitch data for certain games / leagues are available…