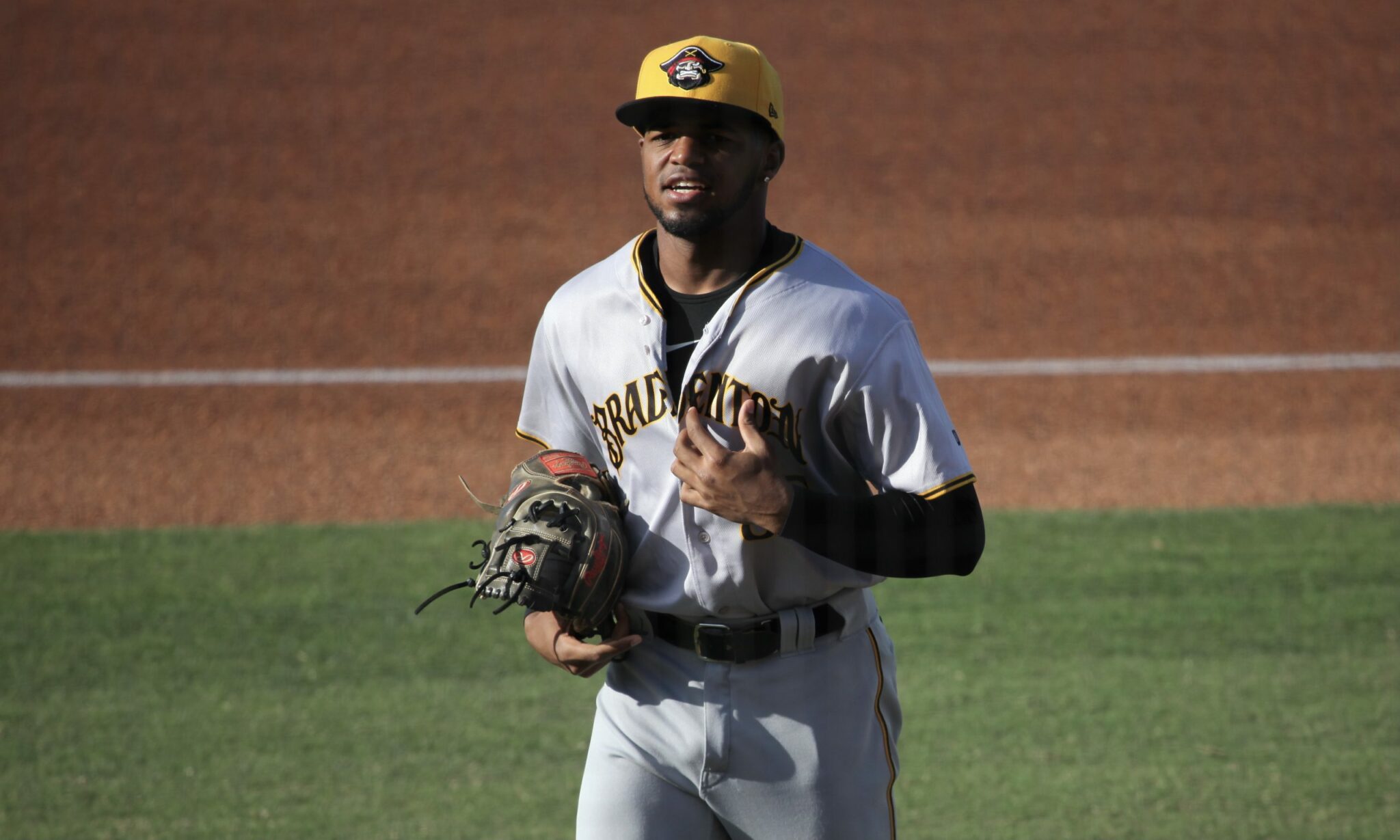 Maikol Escotto opened the season as the second-youngest player in the South Atlantic League.

The shortstop, acquired by the Pirates in last year’s Jameson Taillon trade, entered the season with a lot of promise, fueled mostly by tools, and partially by a .701 OPS in Low-A in his age-19 season.

Escotto has struggled in Greensboro so far this year.

“He’s been expanding the strike zone,” said Greensboro manager Callix Crabbe. “You’re talking about someone who is 19-years-old with very limited playing experiences as a pro. … What we want from Escotto, more than anything, is the ability to stay focused on every pitch, both offensively and defensively.”

Escotto’s potential flashes through at times, whether through his raw power from the middle infield, his speed, or his defensive abilities to stick at shortstop. He’s not exactly a bat-first prospect, but the potential from the bat is driving his value right now in the absence of consistent hitting.

Crabbe feels that the bat will continue to grow, and will one day play.

“I think the chase is a byproduct of just trying to do too much at certain times, not getting himself in a position to hit,” said Crabbe. “The word is trying to take the slack out of his system sooner. That’s something he’s working through mechanically.”

Crabbe said that Escotto has times where he’s not ready to hit properly — either from a timing or loading standpoint. This can lead to swing and miss when he chases. Escotto has been good at times. Some weeks he hasn’t. That’s to be expected from someone who turns 20 in two weeks.

Crabbe remembers being a 20-year-old prospect in A-ball, and the drive to impress.

“You want to do well,” said Crabbe of the experience. “Often times it’s wanting to do too well that could be leading to some of those issues. I think that’s part of it.”

I asked Crabbe about the challenges of managing through the struggles with such young players like Escotto and his infield teammate Dariel Lopez.

“You have to find a perfect balance between when you coach them,” said Crabbe of Escotto and Lopez. “You know it’s not lack of effort, but they’re probably trying too hard at times, and they’re probably worried about the wrong things. They’re probably going ‘I’m 20, I could be in the big leagues next year, I’ve gotta do more.’ That’s not the case. They’ve got to develop. They’re a ways away from Pittsburgh. The talent in both of them is real. It’s just how can we continue as a staff to put them in position to continue to grow?”

As long as Escotto is flashing his plus raw power, and showing the ability to stick at shortstop, he’ll keep getting opportunities to grow.

“There’s a lot of thump in that bat,” said Crabbe. “People realize how much pop he has. I think, over time, the consistency and power will begin to show. I don’t think we can expect that just yet, at 19-years-old. He’s been decent. I expect to see him continue to grow and our group is doing a good job of trying to put him in a position to do so.”

Isn’t this the guy that the Pirates were going to sign as an international prospect but then spurned them and he signed with the Yankees instead. I guess the Yankees offered more money or was it the prestige associated with the Yankee history or winning that encourage him to sign with them?

Lotta thump and crippling Ks at this point. Long way to go though so it can get better.

Third article now (in order I’ve read them) with Crabbe explaining rather thoroughly his hitter’s development and growth, and I’m really liking him. He seems the polar opposite of how I pronounce his name in my head

Good point, and his addition to the other 3 existing Managers from 2021 – Miguel Perez at AAA, Kieran Mattison at AA, and Jonathan Johnston at A – give the Pirates a solid group of what I would consider Players Managers. Very knowledgeable, understanding, and supportive with these kids fighting hard to excel in a high pressure environment.

Maikol Escotto is an excellent MI Prospect. Yes, his bat is struggling out of the gate right now, and the K’s are very high, but he’s 2nd on the team with 6 HR’s. He’ll only turn 20 in June, and his struggles at the plate are offset by the improvements he has made in the field.