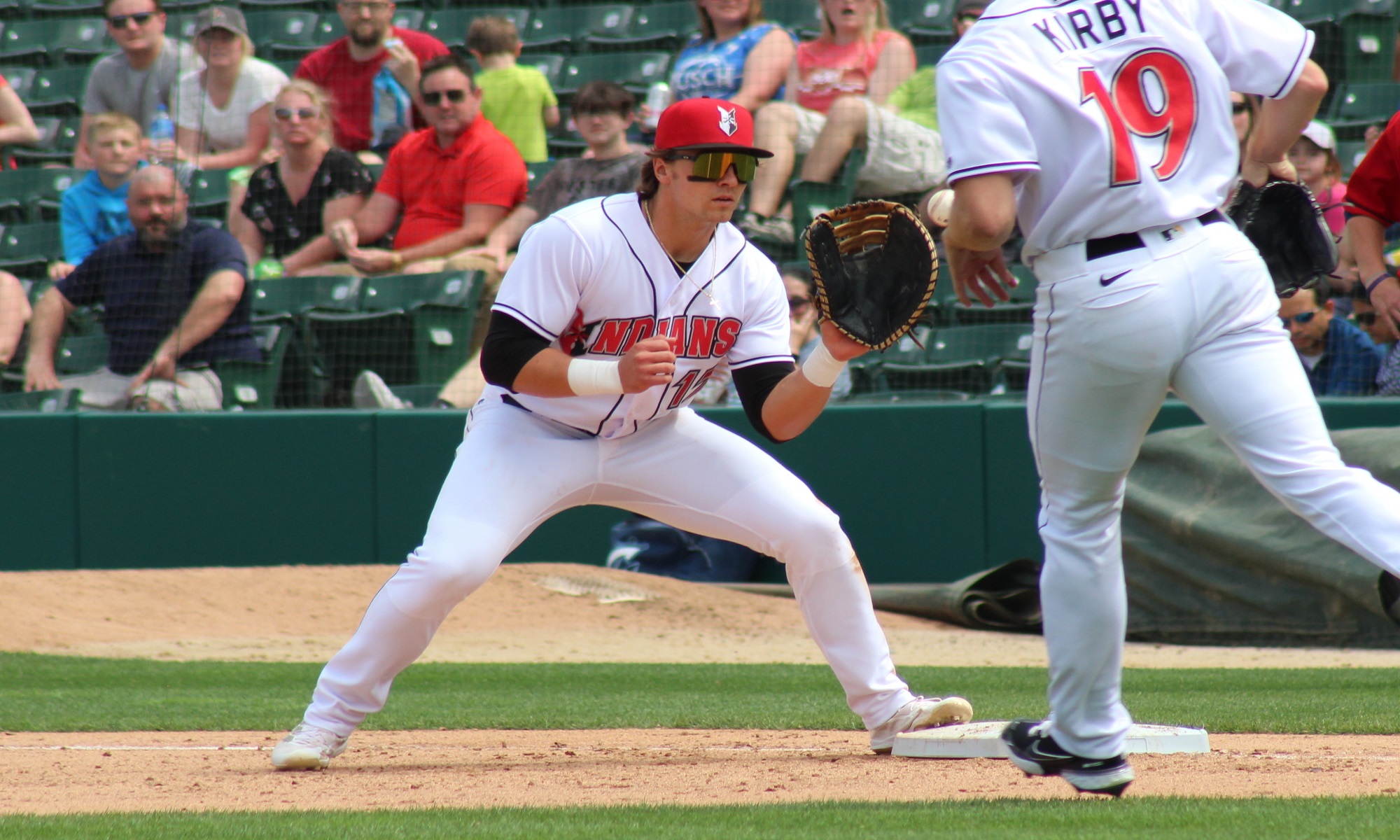 Indianapolis first baseman Mason Martin had a strong month of April from start to finish, putting up a .303/.349/.671 slash line in 20 games, with eight doubles, four triples and four homers. He’s 3-for-3 in steals, and his defense at first base has saved some errors for his teammates in the infield. It was an all-around strong performance, and it earned him the recognition as Pirates Prospects Player of the Month for April.

Martin had a nice season at Altoona last year, while turning 22 years old mid-season. He hit .242/.319/.481 in 113 games, with 29 doubles and 22 homers. That earned him a late-season promotion to Indianapolis to get a taste of Triple-A. The elephant in the room is his rise in strikeouts, coupled with a decline in his walk rate, which was significant over the past last year. That part did not get better in April, with just four walks all month. The strikeouts are better, even if it’s a minor improvement, it’s significant if it sticks. He struck out 34.3% of the time last year. There’s nothing in Pirates history of minor league ball that says that percentage works out to success in the majors, especially not when it is coupled with a lower walk rate. Trust me, I did the extensive research for a Willy Garcia article a few years back.

This year Martin is at 30.1% strikeout rate. Yes, I know that is still high and yes I know it’s one month. I know, hear me out. Right now that is all we have and it’s an improvement. Players don’t usually improve their strikeout rate while moving up the system, it declines as you get higher, and if they struck out a lot in the minors, they either don’t make it to the majors, or they don’t have success. Martin knew that too and adjusted his approach at the plate coming into this year. So let’s see where it goes from here. The first base position for now is wide open for the future. You would hope that all of these prospects at the upper level produce some productive big league players and then you need to find spots for them, so first base in Pittsburgh could be filled by someone you don’t expect right now.

Maybe these adjustments for Martin work out and he takes that spot. We all see what is going on at first base at the big league level now, so that chance might come sooner than you think. He is already showing the defense to contribute at the big league level, some if someone passes him up, they need to be more than just a slightly better offensive option. It’s a very nice first month to the season, and if it continues into the summer, he won’t be winning any more minor league Player of the Month awards.

Analysis: Cal Mitchell got some mild consideration for the top player here after hitting .305/.391/.542 in 18 games. While strikeouts are running rampant in the minors, he had just eight in 69 plate appearances, making his power hitting even more impressive. Rodolfo Castro had a nice month as well, putting up an .833 OPS in 22 games, with an impressive total of 14 walks. On the pitching side, Yerry De Los Santos had ten strikeouts, an 0.43 WHIP and one run allowed in seven innings. Roansy Contreras made two starts and allowed one run in 6.1 innings, with ten strikeouts. Cam Alldred posted a 1.84 ERA, an 0.75 WHIP and 14 strikeouts in 14.2 innings. Chase De Jong earned a big league trip with a 2.08 ERA and 19 strikeouts in 13 innings. He also threw the first seven innings of a no-hitter.

Analysis: Mike Burrows allowed two runs in his third start. He gave up no runs in his other three outings, going at least four innings each time, while giving up two hits in each start. Each start looked strong, as he had four walks and 23 strikeouts over 18 innings of work. His 0.78 WHIP was the best for all Pirates starters, and his .164 BAA was among the best. While Burrows was the winner here, two other players got votes. Connor Scott and Jack Suwinski were our first two Player of the Week winners. That’s always a good start towards a strong overall month. Suwinski may have won the Player of the Month if he didn’t get called up to the majors (nice consolation prize). He hit .353/.421/.686 in 13 games. He also had 13 runs and 13 RBIs, so the number was lucky for him. Scott hit .359/.443/.528 in 14 games.

Analysis: I’m not big on promoting guys after three weeks, just because they did well. Henry Davis is a bit different though. He played at Greensboro last year before the oblique injury sidelined him, and I assumed he would start at Altoona this year. I was wrong, but Greensboro does have two other catching prospects on their roster who could use more time behind the plate. Davis plays the part of someone who is ready for the next level. He’s also been hit eight times, so it might be nice to get him to a higher level where pitchers have better control. Matt Gorski got rave reviews in Spring Training and it has carried over to the season. He had an .870 OPS, with five homers (he hit his sixth on Sunday) and he went 8-for-8 in steals in April. Yoyner Fajardo had a .324 average and an .832 OPS, though he played just nine games. On the pitching side, there wasn’t much. Tyler Samaniego gave up one earned run and had ten strikeouts in 7.2 innings. Sean Sullivan had a bit of a rough go on Sunday, but that’s May’s problem. He had a 2.61 ERA in April, with 12 strikeouts in 10.1 innings.

Analysis: Mason Martin wasn’t a unanimous choice for the Player of the Month. Jacob Gonzalez led the system in average, OBP and slugging (OPS as well obviously), destroying pitchers for a 1.244 OPS, which earned him some support. His “problem” is that he is nearly three full years older than the average Low-A player this year, so you would expect him to do well at the level. He did better than well, but there’s another problem that could be solved by moving Henry Davis up. Greensboro already has guys who are too good to be on the bench half of the time (see: Fajardo, Yoyner). The other catching prospects have been playing first base. Gonzalez plays first base. I think I see a solution. Luke Brown had an .855 OPS, Jase Bowen an .835 OPS, and Tsung-Che Cheng, who also has speed and defense going for him, put up a .791 OPS. All solid numbers for the league that tends to be pitcher-friendly.