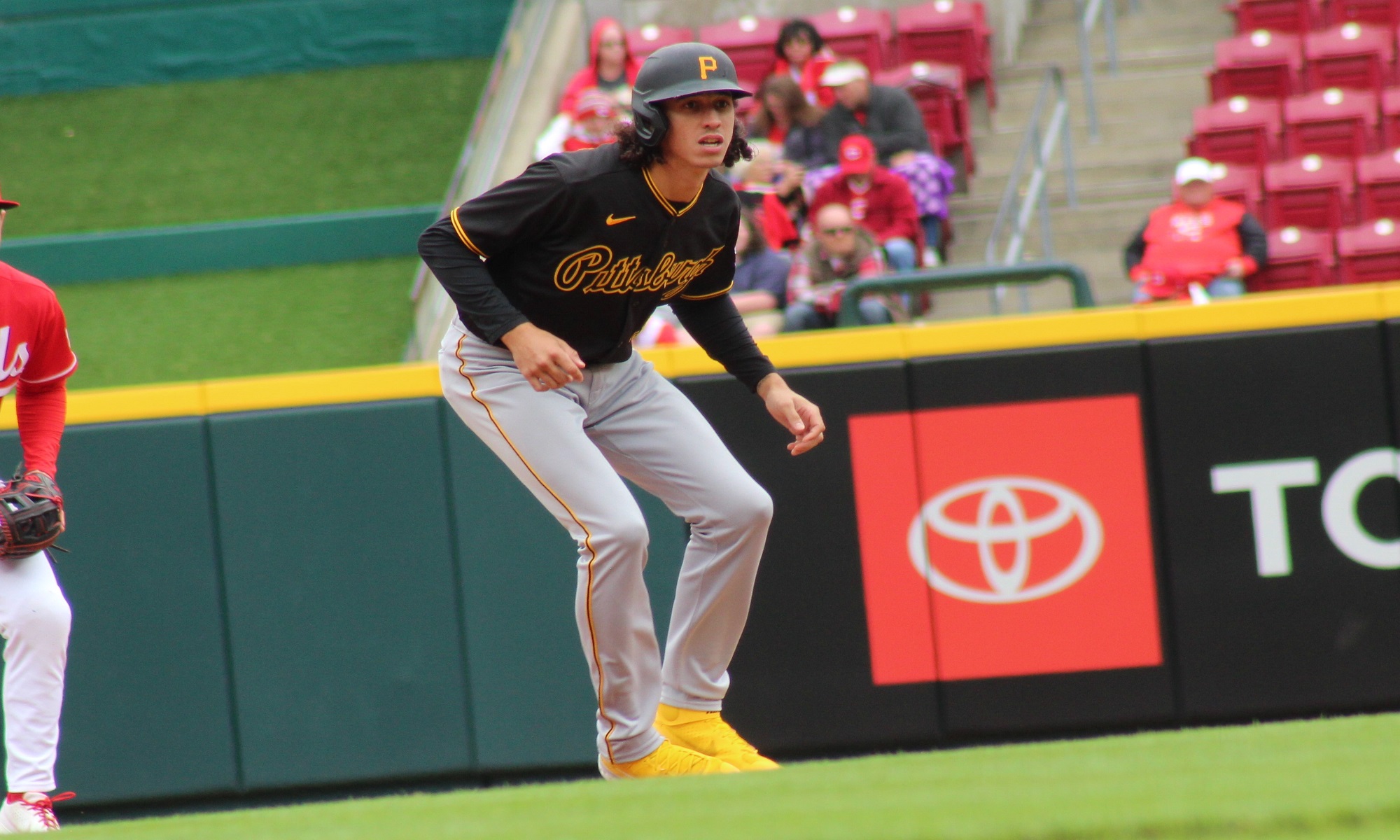 Previously a first round pick, Tucker has struggled to make the majors in a bench role, and has taken a step back this year. He’s probably going to fall behind other players on the depth chart in Pittsburgh, and would probably do best with a change of scenery at this point.

I hope he connects with an organization that can help him realize his potential.

End of an era.

I always liked Tucker, but he just couldn’t seem to lever his body to any positive effect. Always had contact issues, and when he made contact, it was weak, outside of some isolated spells here and there. You have to hit the ball.

Another denizen kicked out of Cherington’s last chance saloon. Another Huntington first round draft pick with nothing to show for it. Turn the page, next chapter.

For me, this notion of not bringing someone up from minors if that player is struggling a bit is crazy…All players get hot and cold and hot and cold bring the kid up there is an actual need for a short run and see what he can do…

His K rate makes him more of a suspect than prospect. Guys just don’t have that kind of K rate in the minors and then come up and handle MLB pitching with success

Last edited 2 months ago by PiratePrimate
1

Mason had a awesome April but so far May has been morose. Now is not the time to call him up to the big leagues as much as I would like to. On a better note O’Neil Cruz has been stroking the ball really well in May with six home runs compared to one in April. I really do expect to see him up soon. A one for one swap with Castro works for me. I’m sorry but the little I saw him last September, he looked like he could pick up the grounders no problem and he just plain covers more space. He will make errors on balls nobody else can get to.

We all know strikeouts have the potential to be a problem, but you are right that this seems like the time to call him up. Not sure what is holding him back but BC and co must see something

I’ll be surprised if he gets claimed, but for his sake I hope he does. Seems like a great person.

Another in a LONG LIST of NH draft failures.

Doesn’t every GM have a really long list of draft failures? I don’t think Neal’s problem was recognizing talent, it was developing talent.

Tucker was a great kid with genuine leadership abilities. However, the Pirates grossly overreached for him and he was never a first round talent. The bat was always the big question mark with him and it is what ultimately ended his time in Pittsburgh. This move is long overdue however.

Last edited 2 months ago by redwards60
0

Sorry it didn’t work out for Tucker, he genuinely seems like a nice young man. Hope a change of scenery is what helps him achieve his dream of being a big leaguer.

As for Pirates, this is yet one more 1st round selection which has produced next to nothing for team. Unfortunately this is a common theme for the Pirates.

It’s a common theme for every major league team – maybe more common for us, but less than half of first round picks make it.

Last edited 2 months ago by john_fluharty
1

Yes, many top draft picks flame out for every team. Just think of all of the former 1st and 2nd round picks from other teams passed though the Pirates clubhouse over the last 5 years.

He was a reach when drafted. Not on draft lists as a number one pick. Pirates threw the bull saying if they did not draft him other teams would . Another first round failure. Very common with this team. Nice guy, Hollywood actress girlfriend. Maybe another organization could allow him to achieve his potential, if he hasn’t done so already.

Who is Yu Chang? N

Was so hopeful for this kid. He had all the right traits, positive energy, attitude, leadership, athleticism, defense. Was hoping he’d lead the next playoff team. Just could not hit the baseball.

I wouldn’t be surprised if someone gave him a shot. He did hit at the end of last year for a few weeks. To me he’s worth a flyer if you have some decent hitting coaches. I’d love to see him figure it out.

Last edited 2 months ago by clemo83
0

For heck sake, did somebody
die? Did we have to cut somebody who actually ever helped this team? They’re all nice guys and sometimes you reach a point where you just aren’t good enough to progress to the next level. Maybe you are spending too much time being a “nice guy” and not enough time learning how to hit a slider.

Today we get to see if this nice guy we picked up can take advantage of his second chance while Cole Tucker looks for his.

I would be shocked if someone claims him.

That being said, he might be better off requesting an outright release and going for a change of scenery.

I don’t think Cole Tucker is a Major League regular, I also don’t think he’s as bad as he’s been this season.

They should just release him. We have plenty of other options to play middle infield in AAA.

Agree, I’d be shocked. He would be a fan favorite in KBO or Nippon……but they have limits on how many foreign players they can roster……but that’s the right place for him.

Tucker is a good guy and a great teammate who could have been a serviceable utility player, But he just can’t hit. Not with a wooden bat.

Unfortunately the Pirates roster has 3 to 5 other guys who can’t hit a baseball, including both catchers.

Such a nice young man who has worked very hard with an all out effort and few if any complaints. Part of me hopes he gets picked up by a team like Tampa that does it’s magic and he’s able to finally find whatever has been missing in his desperate quest to hit the baseball.

Probably not that simple because hitting is hard, but obviously that would be best for him even if it was depressing for Pirate fans, again. It’s more likely that he clears and the Pirates have to decide whether to bring him back to Indy, but either way I wish him well.

I think Tucker highlights the link between depth and development. He got called up prematurely because of need. His hitting ability may not have been higher anyway, but it couldn’t have helped.

Although it’s often been believed that a players growth can be stunted by being called up to the majors too early, several studies have been done and there is very little empirical evidence to support that notion.

Anecdotal reports on different players have been used to justify the idea but the reality is that one of every three first round draft choices never make it in the major leagues regardless of minor league experience.

Thoughtful reply, but all I meant was he was a slightly below-average hitter in AA and AAA. Why does that merit promotion?

I guess it depends. Right now Cruz looks like a below average hitter if you look at his numbers, but we know he’s heated up a lot lately. Maybe that’s what Tucker did in AAA? Not worth the effort to go back and see, but it’s possible.

Last edited 2 months ago by john_fluharty
0

I don’t think Cruz is ready yet, he’s got to learn to play OF and improve his plate discipline. But he has huge tools.

I don’t think they can wait until his defense is ready at any position. When his bat’s ready he can be the DH.

When I visited Pirate City during spring training in 2020, there was nobody more fan-friendly than Cole Tucker. He had unlimited time for pictures and autographs for the fans after workouts until everyone was taken care of. At a downtown Bradenton pep rally on a Saturday night, he was one of the four players to show up and interact with the fans. I know baseball is a business and this move is understandable, but I really hope for the best for Cole. He is a really good guy.

Think alot of us were hoping for and expecting this but somehow it is strangely bit sad to me… Anyways, best of luck young man👏👏🙏🤞👍

Don’t be sad…..he’ll clear and be right back on Indy’s roster!

Really root for this kid. Such a nice guy. But he just doesn’t hit enough to be a major leaguer.

None of the Pirates hit enough to be major leaguers!

Wow, it happened. Seems like a great person, unfortunately never developed. Even money he clears, but if he does is he wanted back?

Good point, but Bae and the others are coming soon enough, so even though I’m not crazy about the constant dumper diving, I get the low level gamble.

I’m not convinced but hope you are correct. Picking up Yang doesn’t bode well for prospects coming up soon.

Righthanded power bat to platoon with our lefthanded power hitting VanMeter at 1rst. Pitchers tremble at the thought.

A prospect who can’t shove a replacement-level player out shouldn’t be promoted.

Yeah but many do outplay them and don’t get a chance to “shove a replacement-level player out”. The organization determines that!

Now, that's perspective. The book is out and like you…

The GM is absolutely the problem.