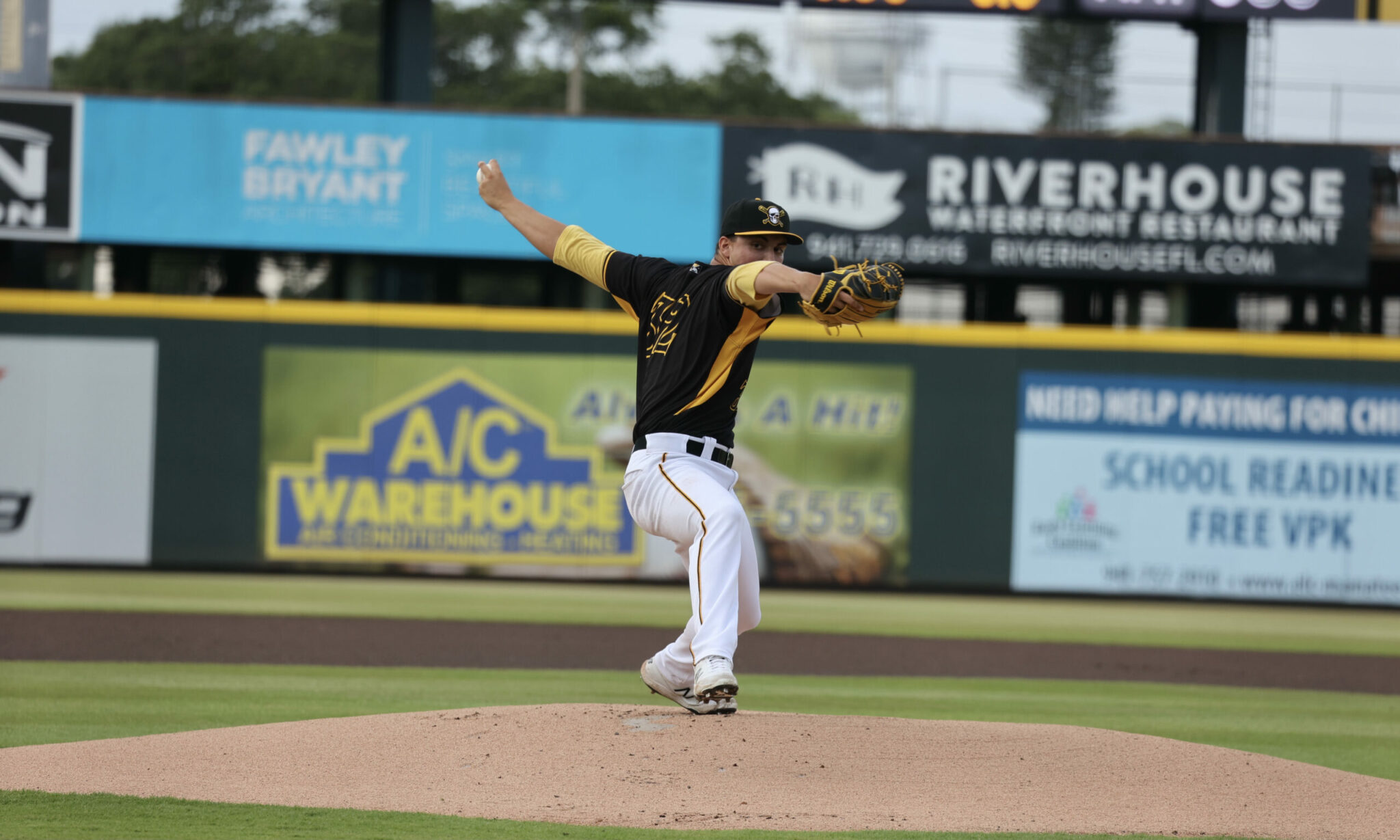 Anthony Solometo made his pro debut on Friday night in Bradenton, giving up two unearned runs in three innings, with two walks and three strikeouts.

Wilbur Miller and I were at the game, while John Dreker and Anthony Murphy were both watching at home on MiLB.tv — while also sending me screenshots of me taking video of Solometo.

VIEW: BEHIND THE PLATE

I liked what we saw from Solometo, especially for a prep draftee making his pro debut in full season ball. The first inning obviously was rough, but even then he would have muddled through it without a run but for the two-out error. Of his 32 pitches in the inning, 19 came after the error. He didn’t get any swings-and-misses until his very last pitch of the inning, but he got a lot of weak ground balls, as he generally keeps the ball down. The main problem was that he had a lot of arm-side run and a large percentage of his pitches ended up off the plate to that side. After the first, he seemed to be getting on top of the ball more and that problem stopped. (“On top of” isn’t quite accurate because of his near-sidearm delivery.) In his last two innings, Solometo worked both sides of the plate, mixed a change and slider with the fastball more effectively, and missed more bats. His velocity was generally 91-92, but at age 19, and at 6’5”, there’s no reason to think it won’t increase. The stolen bases obviously were a significant problem due to the slow delivery. I’m not sure there’s an answer to that, because his pickoff motion resembles his pitching motion.

VIEW: BEHIND THE PLATE AND FIRST BASE SIDE

As Dillon Tatum fouled off his second pitch in the first inning, I was thinking that Solometo hadn’t really gotten any swinging strikes. Looking back, I was correct. I remember thinking this because the very next pitch was a swinging strike to end a long frame. Solometo’s first inning was extended by an error. He had two walks where he couldn’t find the plate. He went 1-2 to Noah Cardenas with two outs and gave up three foul balls before allowing an RBI single. I chalk it up to first start nerves, and note that he really wasn’t hit hard and limited the damage to two unearned runs. Had it not been for the error, he would have ended the first with just the leadoff walk and one stolen base. What I really liked was that he rebounded after this. His second inning was quick, with two more strikeouts and two more swinging strikes. He erased a leadoff double with a pickoff, and overcame another error to get through his third and final inning. He had issues with the running game throughout, due to his extended delivery. However, he’s got a bit of a hitch at the start of his delivery that had a few runners guessing, and eventually led to the pickoff in the third inning. Perhaps with some mastering of this move, he can limit the running game. I took a lot of video, and will be posting that with a more detailed look on Tuesday. Overall, it was a strong debut for Solometo, especially the way he limited damage and rebounded from the first inning.

VIEW: BEHIND THE MOUND

Solometo had a decent debut, backed by some poor defense and his inability to control the running game. He looked like there were some nerves in the first, which is understandable for his first pro game. He got to do in front of a crowd too, instead of on a back field in the FCL like most high school pitchers. I probably had unrealistic expectations for the velocity with almost everyone else in the Bradenton rotation hitting 95+ MPH. He got a lot of weak contact and was mostly around the strike zone. He definitely looks like he is going to be a lot of trouble for lefty hitters. I’m really interested to see how he does in his second outing with those first game jitters out of the way.

I think Solometo looked about as expected from a 19-year-old making his debut. He showed some really good stuff that you would expect from a second round pick. Fastball looked good and had some run on it, and based off some of the reports I had read was surprised with the changeup. He was even able to bury it in the dirt for a swing and miss strike three to end an inning. You also saw some control issues, walking two and throwing a tad over 50% of his pitches for strikes. Overall though, for a debut from a prep pitcher, you couldn’t have asked for more.

This site was understandably lost during the strike. Years of pirates sucking have started to suck the life out of everything pirates, but especially blogs. Suddenly since the beginning of the season, PIRATES PROSPECTS has become the best read in baseball. Every day I get something great like this that I will never see anywhere else. Thanks and keep up the great work!

Under no circumstances should the attempt to fix or correct his slow delivery and penchant for runners to steal. You just let it happen. He will be impossible for lefties to ever hit and his stuff and motion will lead to a lot of K’s. You just let that kid pitch

A horse’s arse extremely speculative comment, based on the P2 comments……. Dreker’s comment stands out about how nasty he’s going to be on lefty’s. He may be destined as a LH specialist reliever. That “may” be his ticket to the show.

This is great for those of us who can’t watch the game! My favorite article in a weeks worth of great articles.

Thanks for the report. Young pitchers are like bird dog pups, you don’t pay attention to them unless they’ve got what it takes and you’re not sure if they’re going to be worth a damn until they grow up.