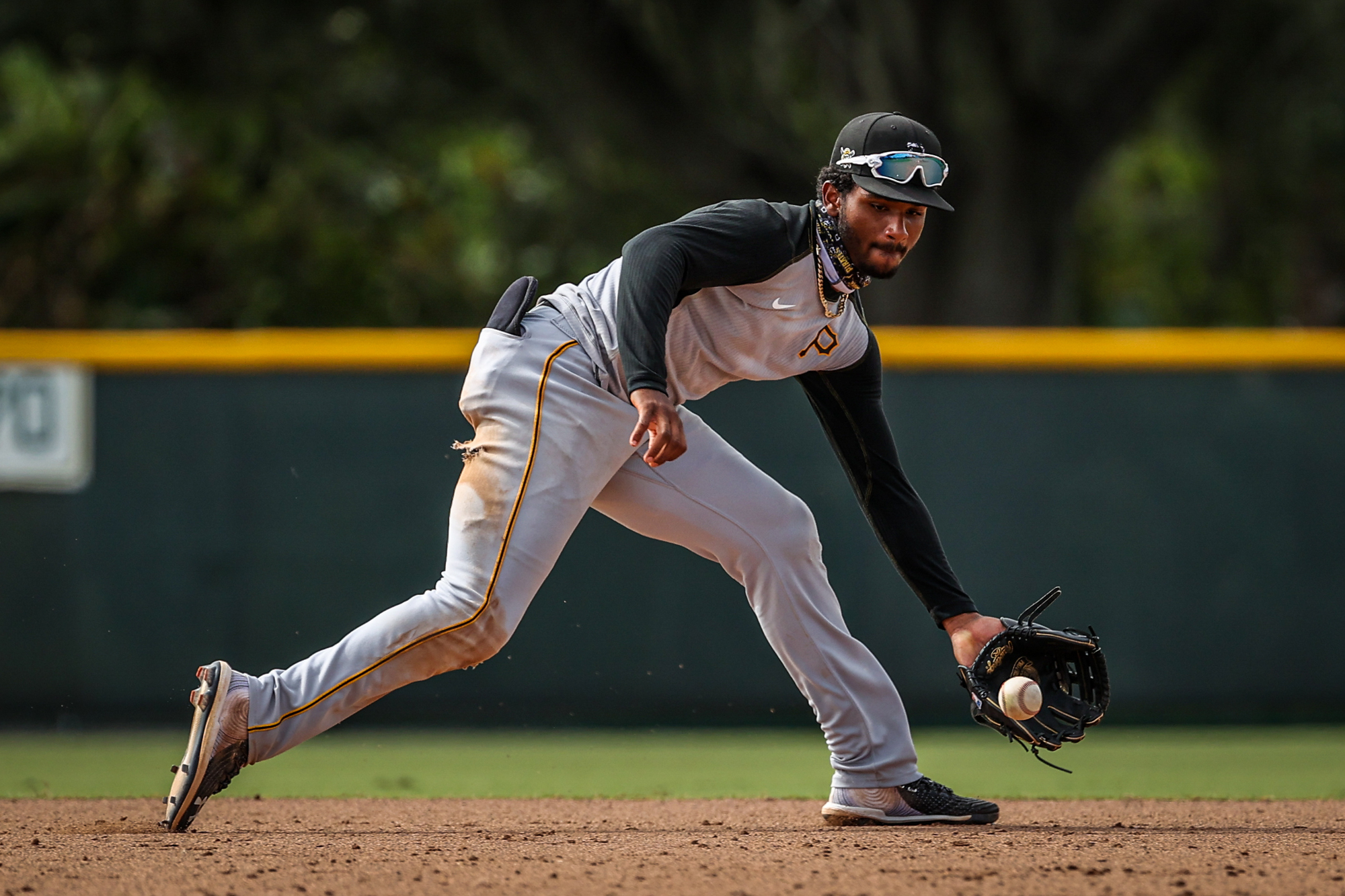 One of my favorite parts of this Prospect Roundtable series we’ve been doing has been the mixture of options on the system.

That wasn’t the case this week.

If you’ve been following along, we’ve had a theme running for the shortstop position. I started with a more open-ended look at what the position is anymore.

One week ago today, we all took an independent look at how long Oneil Cruz can play the position, because that’s the real reason we’re discussing all of this.

This week, we’re expanding the view beyond Cruz and looking at the system with the question: Who Will Be the Pirates Shortstop in 2025?

And yeah, it was unanimous, and this whole series should help explain why Oneil Cruz is getting outfield work, even if he technically could play shortstop in the majors.

I think Liover Peguero takes over the shortstop job at some point during the second half of 2023. People will want to rush him there sooner because of his hitting, and we might get a sneak peek of him this September since he’s already on the 40-man roster, but the consistency on defense is still developing. He’s going to need the game experience before he gets to the higher level. You want him to be ready and stay there once he really arrives. As for 2025, I don’t see anyone right now who has a chance to unseat him by then. He will be in his second full season in the majors if all goes well, and he should settle nicely into that spot. I wasn’t as sure of his future at the end of last year, but he looks like he’s added more confidence in his approach at the plate, with more consistent hard contact and a better understanding of the strike zone. Going from a hitter-friendly Greensboro to a more neutral Altoona, while performing better in the early parts of 2022, is very encouraging, but it’s the fact that he is having better looking at-bats, and that really helps his case.

This one isn’t too hard. The only other candidates at this point are Kevin Newman and Oneil Cruz. Newman will be a free agent that year and he’ll be gone long before then anyway. He’s arb-2 this year and the Pirates won’t want to pay him even if he comes back and has a good year. They seem very reluctant to make up their minds what to do with Cruz, and his struggles at the plate are probably complicating the issue, but their equivocations alone tells us they don’t really see him at short. Peguero, on the other hand, should be a shortstop long-term, despite his defense still being a little erratic. And he’s one of the very few prospects in the system who’s taken a step forward this year instead of a step backward. Coming at the Double-A level, that’s a hopeful sign.

I really wanted to, and almost went with Maikol Escotto as the ultimate curveball on this. While he’s improved defensively, he’s still a big question mark at High-A right now, so I went with Peguero. While the errors are concerning right now, he’s young enough to work on hammering out any issues before he makes it to the majors. A lot of the mistakes have been in a small time frame, it may be more a mental issue than physical. Peguero has the athletic ability to stick at short, and his bat gives him the potential to be above average at the position. With the way the Pirates have lumped Peguero and Nick Gonzales together, you kind of get the feeling that’s what they are hoping the future double play combo ends up being.

This is a very loaded question, because the rebuild should be reaching fruition. Each of the internal options have questions and concerns. Kevin Newman will have entered free agency and Oneil Cruz’s body will have forced him to change positions by 2025. The clear internal candidate is Liover Peguero. However, he will have to clean up his throwing errors detailed this week by Tim Williams. As for other internal candidates, Maikol Escotto would need to make major strides with the bat to even make it to the big leagues. A sleeper is Andres Alvarez, who will need to continue with the stick in Altoona once more playing time clears with promotions of Cruz and Peguero. My choice will be Peguero based on the time he has to tidy things up, but it’s not entirely unreasonable to think the 2025 Pirates shortstop isn’t in the organization yet.

Last week we focused on Oneil Cruz and how long he could play the shortstop position. Wilbur and I both projected that he could remain at shortstop for about 3-4 more seasons, which would put him moving to another position around 2026-2027. So it’s feasible to imagine Cruz remaining at shortstop for the 2025 season. Those projections on Cruz are largely made in a vacuum, and don’t factor in better options in the organization. Peguero has some defensive issues to work on, as I outlined this week. They don’t seem serious at this point when you think about how much time he has to develop right now, and how seemingly little of his game he needs to develop. The Cruz debate has lasted mostly because of the dream of having his bat at a premium position. Peguero doesn’t have the impact power of Cruz, but his bat might be more complete, providing the same impact. Add in that he has an easier probability of sticking at shortstop with his build and skillset, and Peguero seems like the easy pick for the Pirates’ 2025 shortstop.

After viewing Tim’s 5/17 article and collage of errors by Peguero, I’m definitely concerned. Looks like Peguero is unsure of his natural arm slot…..from dropping down side-arming to 3/4 to standard over the top. This is the last problem we need to have at SS, we need someone who has a 70 grade arm in MLB with accuracy. Uhhm you know we’re talking about the most important position on the field, with or without shifting.

Hot take.. if theyre that hellbent on moving Cruz off of shortstop, they should move him to 2b just like every other questionable shortstop ever, not LF.

At least that would maintain some up-the-middle value.

Liover Peguero should be the SS by mid-2023 and then for the foreseeable future. The glove and the bat are strong, and he just needs to eliminate some throwing issues. The ’23 infield will include Mason Martin and Ke’Bryan Hayes at that point, but not sure about Nick Gonzales will be ready. My Utility guy is definitely Rodolfo Castro, and he could fill in at 2B. Hopefully, all of the AAAA players will be history by then.

Our OF will be strong on both sides of the ball and Henry Davis could be up behind the plate. Our BP is already strong and will continue to bring homegrown talent up. Draft Termarr Johnson this year, and light candles that a Rotation can be assembled by late 2023.

Didn’t we have a RF by the same name? He has done his best to earn a DFA from this bunch of loonies, and I am going to be interested in the teams that pursue him. His heart and head was with this franchise at one time, but that ship has sailed.

Pirates being Pirates prediction: well past his prime Andrelton Simmons

I was thinking similar in Pirates being pirates, but Clint Barmes is retired now, right? Alcides Escobar maybe? He’ll be 38 and has a lifetime .640 OPS.

Very possible the next shortstop is Brooks Lee. I rather them draft Lesko on a under slot deal. But something tells me he will be the pick.

I was really big on the idea of Brooks Lee. Read more about him, good hitter, but no where is expecting him to stick at the position, so kinda moved me off of him.

Keith Law is just one analyst and he also kinda sux, but he doesnt think Lee sticks at short.