Todd Tomczyk, the Pittsburgh Pirates Director of Sports Medicine, gave some updates to the local media involving the top hitting prospects in the system.

Henry Davis has resumed all baseball activities and should be headed to Pirate City for some rehab work before returning to Altoona.

Oneil Cruz is out with a mild ankle sprain and his return date is unknown at this time, but it’s not expected to be long. He wasn’t put on the injured list yet, so that could be a good sign, though it’s possible to backdate the IL trip three days if he isn’t going to return this week. The Indianapolis bench yesterday had two catchers and that’s it for available players.

Nick Gonzales is day-to-day with heel discomfort. He got hurt running down to first base yesterday.

Quinn Priester is throwing live BP and he’s expected to start throwing games soon. It sounds like it’s possible that Davis could catch Priester in the FCL, judging by the timing of each.

There was also news on big league players. Daniel Vogelbach is doing running, Yoshi Tsutsugo is not yet. 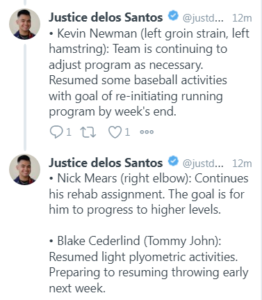 Update on Jameson Taillon’s Rehab and His...

Does Marisnick’s baseball activities include hitting?

They didn’t really include hitting when he was on the active roster, so I’m guessing it’s optional.

Vogelbach is walking at a quicker than usual pace

A large portion of our future all in one headline

Can’t ever have nice things