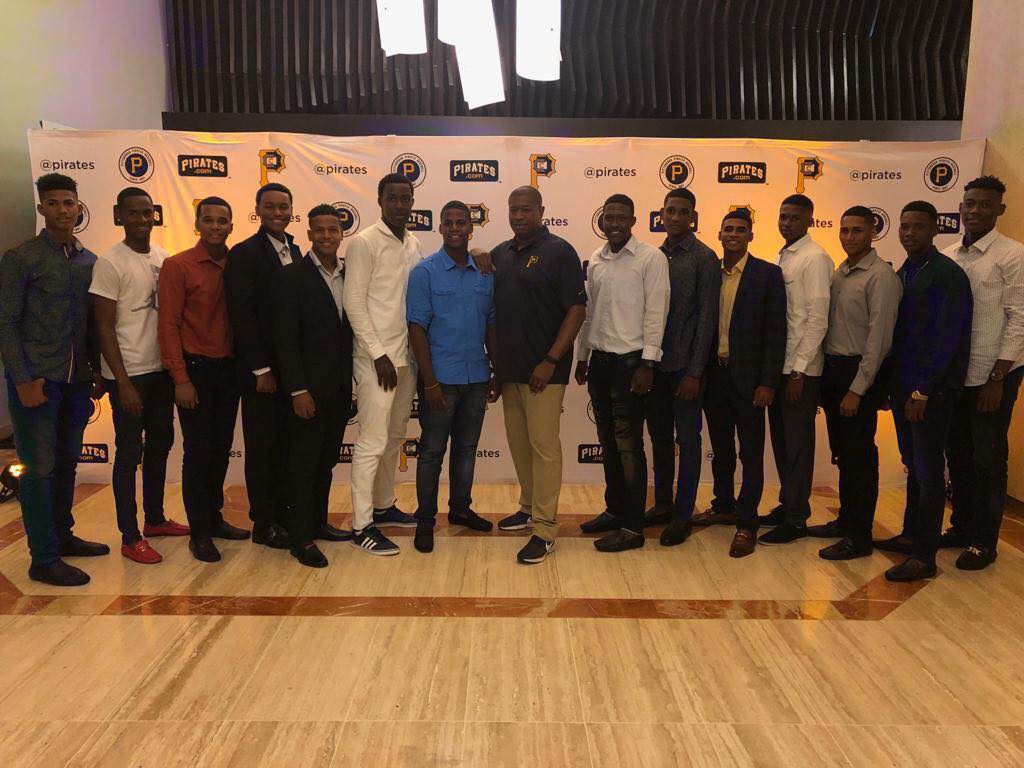 The Pittsburgh Pirates have two Dominican Summer League teams and just one Florida Complex League team this year, which helped out the talent level in the DSL, especially in the outfield.

They didn’t sign a large group of players during the latest international signing period for two reasons. The main one is that the bonus pools were set, with no trades of bonus pool space and a hard cap, so there’s a set limit you can spend. The Pirates went big on two players and semi-high on a few others, using up a large majority of that bonus pool space on a handful of players.

The Pirates had just over $6.2M to spend and $2.1M went to shortstop Yordany De Los Santos and outfielder Tony Blanco Jr. Another $500,000 went to Taiwanese pitcher Hung-Leng Chang, who went right to the FCL. Pitcher Pitterson Rosa received $700,000. You have three new DSL players from that group, which took up more than half of the available bonus pool. You’re talking about $2.9M still, which could have been spread around thin if they decided to go that route, but outfielder Eduardo Oviedo, first baseman Carlos Tirado, catcher Axiel Plaz and shortstop Roinny Aguiar combined to receive more than half of that remaining money. So that’s just seven players for the DSL teams and they received almost 80% of the bonus pool.

The Pirates actually had to sign a few players late to fill out the rosters to make up for injured players. Three players are out for the season (all pitchers) and another ten approximately are on the injured list to begin the season, including Darlin Diaz, the top pitcher signed in the last signing period; and Blanco Jr, who is working his way back from a spring injury. With the DSL seasons already being cut from 72 to 60 games, the teams have been playing seven inning games during the first week, so there is limited overall playing time.

You’ve already read some of the big names to watch for the two teams, but there are players there from the previous two signing periods as well. So here’s a look at the players of note by position. Remember that these players are mostly 17-18, so someone not mentioned here could really hit another gear during this time and go from an after thought to a prospect.

Pitterson Rosa was the top pitcher signed this year and he was also among a group of pitchers receiving a lot of praise when I checked in on the team. I got a list of four players who did well in Spring Training games and he was at the top. Hader Blanco was another on that list, and he was signed back in January. The other two doing well this spring were Patricio Ress and Adolfo Oviedo, who just recently signed, but was there on a tryout. He got a lot of praise for the way he worked on the mound, his confidence and they way he attacks hitters. Here’s the link to our 2021-22 international signing tracker, which has info on all of the recently signed players. The 2020-21 group can be found here, and the 2019-20 group can be found here. There are quite a few players still from the 2020-21 group in the DSL, but the 2019-20 group is smaller. Many have moved up and a few have been released.

Out of the remaining players, the big bonuses were spent on Gilberto Alcala, who missed all of last year, and Yojeiry Osoria, who received a $600,000 bonus in 2019, then struggled in his debut last year. Luis Faringthon received a $160,000 bonus, but he struggled with control. I’ll point out that a lot of players did Spring Training in the U.S., then returned to the Dominican due to roster space. The Pirates have not focused on pitching during the last two signing periods, but two of their better signings (Chang and Alessandro Ercolani) went right to the FCL, so that took away some potential talent. Between those guys are others moving up, the pitching talent is a bit thin as far as current stuff right now, but a number of pitchers have big league upside.

The big name here is Axiel Plaz from Venezuela. He signed for $350,000 due to advanced defense and a strong arm for his age, as well as a strong approach at the plate, with offensive upside. Richard Ramirez has strong defense and a questionable bat. Samuel Escudero was acquired from the Milwaukee Brewers last year in a minor deal. Miguel Sosa and Eybert Escalona are two guys who were described as raw, but have upside potential. Plaz is the big name to watch here.

Yordany De Los Santos is the big name here and on the team, along with the aforementioned Tony Blanco Jr. De Los Santos received $1.2M to sign due to his athleticism and ability to impact the game on both sides of the ball. His upside is middle of the order hitter who sticks at shortstop. There’s no such thing as a sure thing in the DSL, but he’s as close as you get to that with the Pirates.  Carlos Tirado playing in the DSL is a bit of a surprise because he had summer experience against older independent league players in the U.S. last year and held his own. He’s a power-hitting first baseman, who probably would have moved up if they had two FCL teams. Roinny Aguiar is a small shortstop from Venezuela who profiles as a lead-off hitter with his speed, and he will play middle infield in the upper levels. Both Tirado and Aguiar are mentioned here due to their bonus numbers, but they both also impressed during Spring Training.

Holdover players who signed for decent bonuses include John Zorrilla, Delfin Ramirez, and Wesley Zapata. All got strong scouting reports, though Ramirez was a 2019 signing, who struggled last year and hasn’t been in the lineup this year. Zorrilla was rehabbing a shoulder injury last year and he mainly just saw action as a pinch-runner. He was the second biggest signing in 2020-21 behind Shalin Polanco, and he also rated as the second best player in the group (not always the case that bonus matches up with rating). Zapata was described as raw when he signed last year, so no surprise that he returns. He had one extra-base hit last year, and had four in his first five games this year, so some of that raw is already wearing off.

While the infield has the best prospect, the outfield is loaded with upside, and that is even with Blanco Jr. out of action right now. They have plenty of power potential between Dioris Valdez, Ewry Espinal, Robert De Paula, Eddy Rodriguez, Eduardo Oviedo, Rodolfo De La Cruz, Gustavo Armas and Ruben Vizcaya. That’s eight players who should be playing regularly, plus Angel Rodriguez, who has all of tools to be good, but he’s a little raw compared to the rest. All of these players were higher profile prospects when they signed.

Oviedo is an athletic center fielder, with a large frame and skills on both sides of the ball. Along with Armas, they have the most upside among complete players, with Vizcaya not far behind. Valdez and Espinal are huge raw power bats, some of the best power in the entire system, but that’s their only carrying tool right now. De Paula, De La Cruz and Rodriguez fit in the middle of those two groups, not one tool power hitters with huge raw power, but also not five-tool players. The there’s Blanco Jr, who has the same type of raw power as Valdez and Espinal, but he’s more advanced at a younger age. Multiple scouts said he has 40-homer potential.

If you were putting a top ten prospect list together from both DSL Pirates teams, it would include at least five outfielders, and I wouldn’t argue with someone who had as many as seven.

Williams: What Does Oneil Cruz Want to Become?

Bubba Chandler: “At the end of the day this is an elite competitor”

Braylon Bishop Features One of the Sweetest Swings in the System

Any potential breakout players in the above group based on scouting reports of Spring training? If so, can you share a few names for us to follow?

I noted all of the players who got Spring Training praise up above. Didn’t hold back any names because I wanted to make sure I got everyone of note

How long is Blanco Jr out?

Unknown timetable when I checked about 4-5 days ago. I was just checking to make sure he was playing this year, but they didn’t want to be anymore specific than that