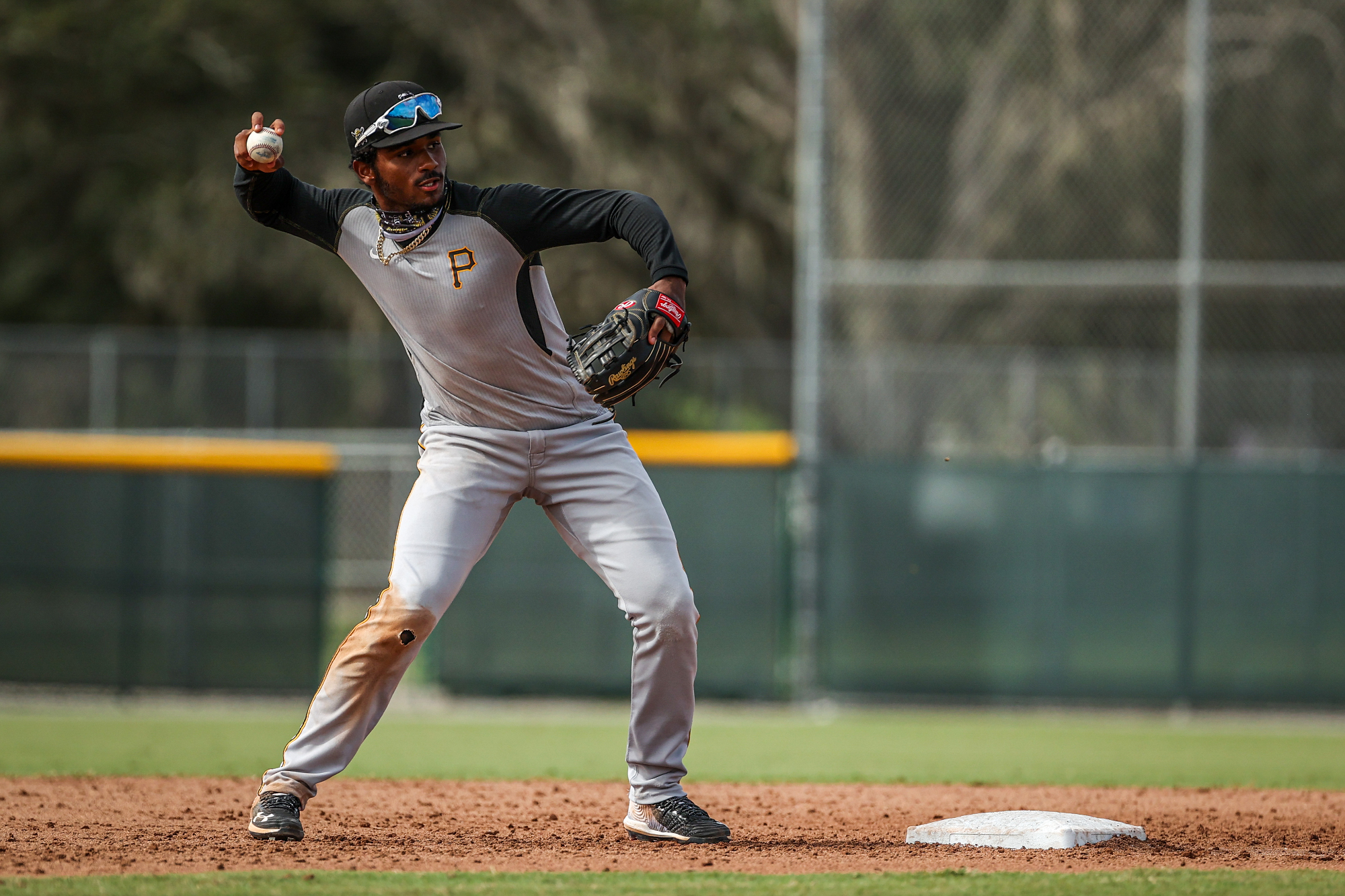 While one of the Pirates shortstop prospects is up in the majors right now obliterating baseballs, another is back in the minors locked into an interesting matchup against a fellow Top-100 prospect of the same position.

Until Liover Peguero makes the major leagues as a regular, he will always be one of the younger players at whatever minor league level he is playing in at the moment. This week he is in a rare position of not being the younger of the two primary shortstops stepping on the field.

He and the Altoona Curve are up north right now taking on the Toronto Blue Jays’ Double-A team, the New Hampshire Fisher Cats, and another Top-100 prospect, Orelvis Martinez.

Heading into the season both ranked close on Baseball America’s Top-100 list, with Martinez sitting 75th, and Peguero a couple spots back at 78.

They have different skillsets, with Martinez more reliant on his plus-power, and Peguero having more speed (not discounting the power he has hit for this year) but both have been above league average despite being two of the younger at the position in their league.

While comparing prospects, especially their development can be unfair, as each moves at their own speed, it is fun when these match-ups do come up and presents an opportunity to gauge how a player we are use to seeing stacks up against a similar prospect in a different organization.

When thinking about player vs player matchups, the first thought is usually pitcher vs hitter. Sometimes the position vs position battle can provide more excitement over the course of the entire week. This one is special as it is two highly regarded players playing a premium position.

The Pirates farm system has been getting a lot of ‘wins’ lately with the success of some of the prospects at the major league level. They have a chance to flex their organizational muscle with one of their top prospects taking the same field as another highly regarded player who plays the same position.

Peguero, of course, struck first on Tuesday with a two-hit night as well as making a great over the shoulder catch on a blooper in the outfield.

Today: The Offense Has Come Alive

Glad that Swaggerty is in Indy getting consistent reps.

If this team had 2 more reliable relief pitchers they would be close to .500.
They have lost so many games in the 6th-7th-8th innings. As important as it is to get a catcher for the next year and a half, building a better bullpen is essential if this team is ever going to contend.

I’m not sure if it can happen but stallings is signed through next year and with the marlins having a bad year, I wonder if we could reacqire him for pennys on the dollar.

With the caveat that pitchers and health mix like water and oil, I’ve been thinking lately that next year’s bullpen should be significantly better just from internal development. Granted the team has been fortunate this season on the health front from the starting pitchers and that can’t be relied upon next year, or the rest of this season for that matter, which would deplete depth and consequently the bullpen. But with Yerry and Vieaux getting brief tastes of action, Bolton and MacGregor getting results coming back from injuries and guys like Burrows and maybe Priester pushing for the rotation next year at some point I don’t think next season’s bullpen will be anywhere near as bad as the current iteration. Cherington still needs to get a starter and at least one reliever this offseason but the situation isn’t as dire as it seemed even just a couple weeks ago in my opinion.

The Bucs are definitely on the upswing with pitching overall – both SP’s and RP’s. Toribio is another young RP to watch. I think as soon as we get the Catcher position settled, the pitching will take another step forward.

Good to see Henry Davis back in the lineup at AA. Michael Perez is currently a -0.7 fWAR! DFA Perez, keep Heineman and bring up Jason Delay. Path forward, I think Delay can be a solid backup and support system for Davis in 2023.

Stallings has not done much at the plate this year for the Fish. Granted he is still better than Perz and Heineman but that bar is extremely low right now. He is a negative 0.4 WAR himself this year.

A trade that was made at the absolute highest peak!

Yup. Looks like Jacob netted us a decent return. At the least, we traded a grind em out C for a grind em out SP. Who may turn into a great back end of the rotation guy who will give you a chance to win and eat some innings in the process. Got a couple of half decent prospects on top.

Last edited 13 days ago by roibert.kasperski
1

Kyle Nicolas is our #16 according to Fangraphs and Conner Scott was rated #43 . I like the upside of Zach Thompson, but the real payoff is in the two prospects.

Nicolas could be promoted to AAA. Scott needs to develop a power stroke – 10 doubles, 3 triples, but only 1 HR. Still very young for AA

You left out Kirk, Martinez and Kirk for Q!

I have been waiting for 2+ years for this past month. I knew with what BC was doing we would have moving up prospects to the Show this season. I never dreamt that there would be 8 prospects on the 26 man now plus another 5 or 6 that were brought up and either sent back or on the IL. The amazing part for me is that there is still a cupboard full of not only just prospects with talent but top prospects yet to come over the next year or so. Can’t wait until the deadline and then the offseason as we should see a few of the MI types get traded because of the wealth of talent now and also a couple of good FA signed to fill in gaps. FA will be more willing to sign if they know they are part of the actual build and not a stopgap to be traded. Like a kid in a candy store here 🙂

Hated to see Gonzales go down, Bae has made him trade bait.

Or we trade bae for pitching help!

That was where I was with him going into the Spring–did not see a place for him. Now, I want him starting at second and have to be pushed out of the starting lineup.

Especially interesting to see if they try to address catcher. We need someone who can start now and move into a backup role. Maybe that’s Roberto Perez, maybe it’s not.

They will try to address it. May have to come in a trade. FA will know full well that Hank will be the man and Endy should be splitting time not much longer after Hank arrives in the Show and may be hesitant to enter that fray. As you say, it will be interesting to see how it plays out.

Only the upper echelon catchers get 3 or more years in free agency contracts anymore and I’d be (pleasantly) surprised if Davis is the full time starter in the next two years. I’m assuming his timeline is to get called up next year at some point and get his feet wet then be in some sort of timeshare in 2024 before taking over full time duty in 2025. Briefly looking at the list of free agent catchers available this offseason I’d guess that Willson Contreras is the only one who would be out of the Pirates’ range to get. A couple interesting names on one or two year deals are Christian Vazquez, Tucker Barnhart and Mike Zunino.

Will be very interesting to see how the shortstop battle between the Pirates own top 100 prospects. Will depend upon how well Cruz fields the position in the Show as to who wins the Bucs internal battle. One will have to move positions if both bats are to be in the lineup as soon as next season.

with Nick Gonzalez out for the season, it would be a good time for Peguero to work on his position flexibility at second base

They’ve been mixing in a game per week usually with him at second base, just to introduce him to the position

I see he has had 4 games so far this season. One of the 2 is gonna have to be moved. If Oneil tightens up his D then it will get real interesting.

If Cruz’s defense takes a step forward he is going to be the shortstop without a doubt. Peguero will have to move to second. Have had someone mention to me left field as well.

Without being a HR hitter, it is difficult to understand the almost 8 K’s/Walk ratio so far in AA for Peguero. Then you look at a .294 batting average and a .468 Slugging Percentage and you say so what he strikes out a lot.

Without affecting his aggressiveness, it would be great to see him drop that K/W ratio to 4/1, especially if he moves to 2B. And, with just a slight improvement in lift, he could be a 20/20 hitter.

For Cruz, that one play on his opening game spoke volumes – backhand, not a quick, panicky release, but a crow hop and set with a 96 mph strike to 1B. He’s learning. The atmosphere in Pittsburgh will lend him more opportunities to improve his game, and I would not be surprised to see an experienced SS like Jordy Mercer being hired as a “Traveling fielding coach” who is headquartered at PNC Park. I would rather have a vet who spoke the same language as Oneil, but Jordy had to work hard to get to the steady .980+ fielding SS he became.

Gonzales isnt out for the season though, at least not yet, as of now hes out until july 31

I would look for him to be on a rehab assignment in Bradenton before July 31 if all heals well.