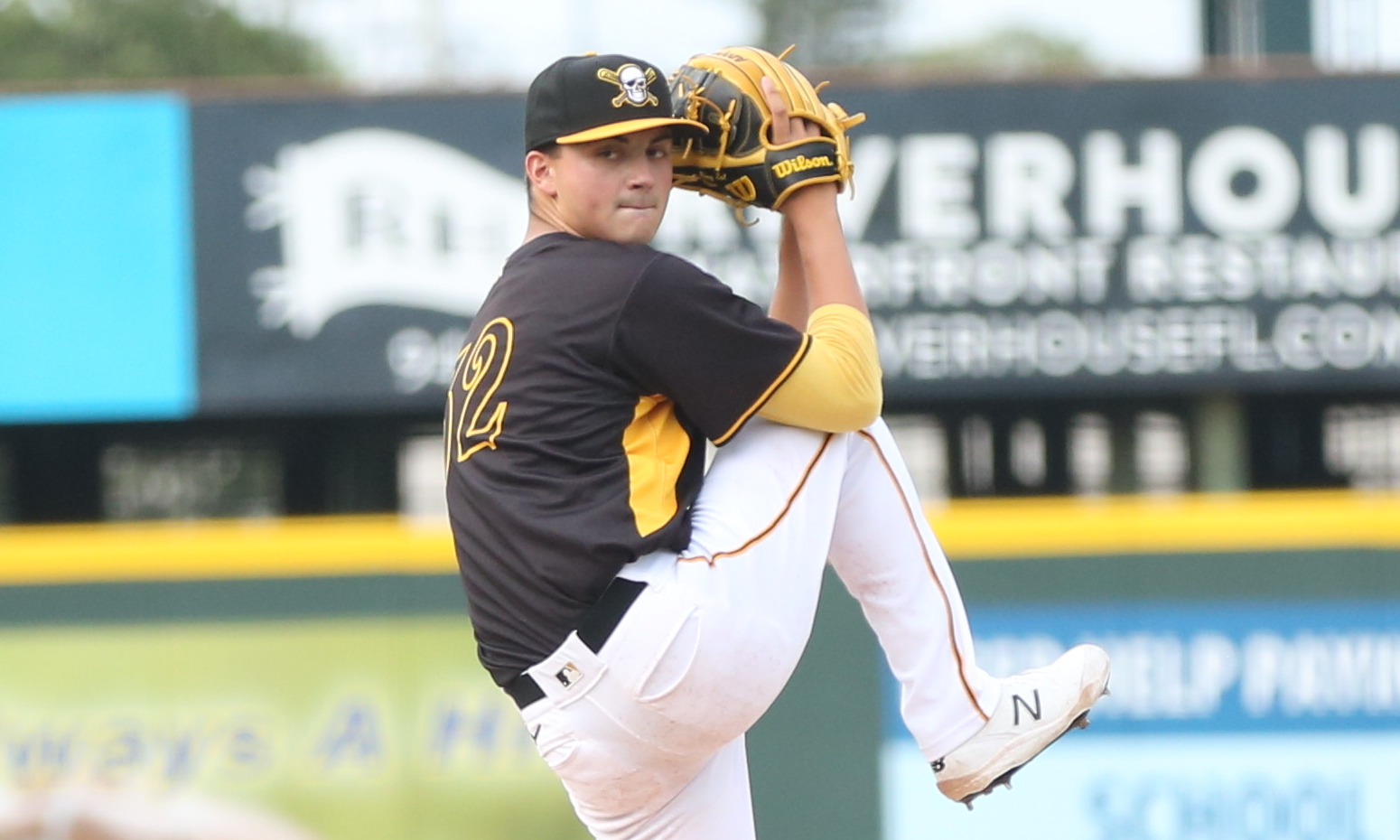 Here’s a look at Priester’s entire outing. He only struck out one, but still pitched well, despite it being his first game back. For the final out of the first inning, he took a ball off the leg that he was able to recollect himself and make the out.

Mike Jarvis with a great play to get the first out of the game #LetsGoBucs pic.twitter.com/Da1qLtxah3

Mike Jarvis started things off with a fantastic throw. He had to run past to the other side of second base and make a jump throw to be able to get the out. Sergio Campana made a couple of big diving catches in the game, this one in the seventh.

Sergio Campana with an amazing catch. There’s something happening in Bradenton tonight. A lot of good defensive play all around the field #LetsGoBucs pic.twitter.com/4ya2wJOQnf

After starting the game off with a fantastic play, Jarvis secures the ho-hitter with a sliding catch in the infield.

Mike Jarvis opened the game with a fantastic play, only right he ended it with one that secured the no-hitter #LetsGoBucs pic.twitter.com/QHhz3bMJgQ

Norkis Marcos hit a two-run triple that opened up the scoring for the Marauders. That was all the run insurance they needed.

Norkis Marcos with a 2 run triple in the fifth inning, breaking the 0-0 tie #LetsGoBucs pic.twitter.com/VQNTNdycrb

Bae hit his 11th double of the season for Indianapolis, as he continues to creep closer and closer to last year’s extra-base numbers.

Ji-Hwan Bae with a RBI double for Indianapolis. His 11th double to the season #LetsGoBucs pic.twitter.com/NwvjtVzprv

It’s amazing just the amount of raw power Oneil Cruz has, and these kind of plays are the ones that remind you of that.

How on earth does O’Neil Cruz do that? Glad the Indy announcers are asking that question because with BCs decision making no one in Pittsburgh may ever get the chance to ask.

Starting to become a Baeliever.

The ball drops about 5 feet in front of the right fielder and Bae was still a step away from touching first base but makes it to second no problem. 99 percent of guys just take their single on that hit. Very impressive awareness and confidence on that play.

Watching over priesters start there, i feel like command/control might be his key to the next level rather than better stuff!

That’ always been my concern with him. The stuff is there. I like the steps the slider has taken too. But commanding that fastball will always be the key for him

Yes, but. Aren’t there concerns that the four-steamer doesn’t set up the curve well? But the slider and the two-steamer seem to work together.

The two seam and slider worked really well off each. When he gets to Altoona will be interesting to see if the rehab start dropped a hint at him using it more. He threw the curve I think just twice last night.

Let’s hope this is the spark that gets Bradenton playing better ball!

Thanks Anthony, once again for the buffet of Bae highlights daily, I realize it has nothing to do with my ‘ask’ of you🤣…. but about how it isnt possible to not include him, he is a highlight reel of performance….his prospect rating has to rise in all of those sites, I would imagine🤔👍👍

He’s always the talent to be one of the top prospects. Think the lack of power kept people away. Now that it’s come along the way it has I’d be interested to see how much he jumps up lists as well