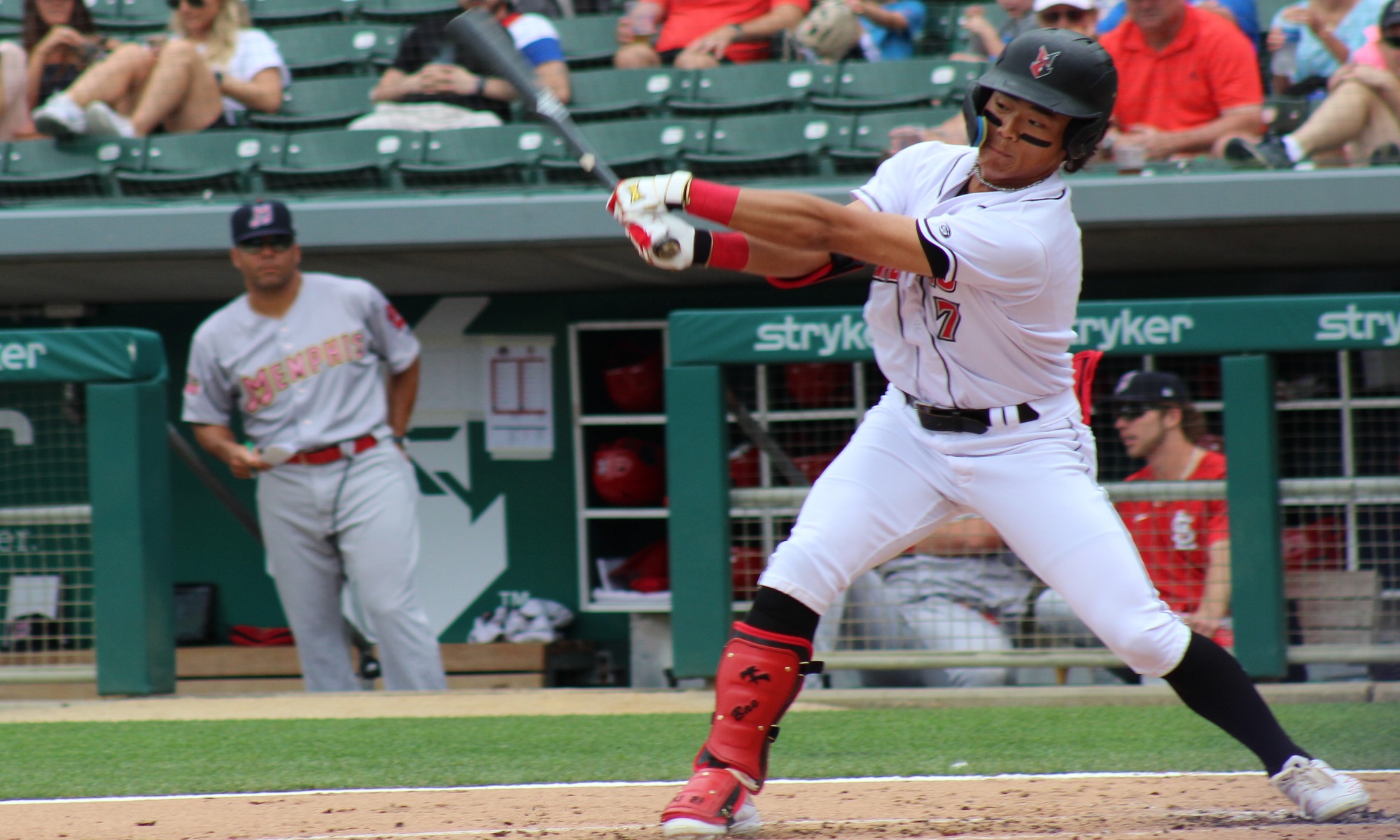 The All-Star break is ending, and teams in the Pirates’ system are beginning the final stretch of the minor league season. After a good portion of the system got off to a rough start to the year, most are starting to put it together, and are in line to finish strong.

As the teams play through the final bit of games, I wanted to take a team-by-team look at one thing to watch for down the stretch.

Who Still Makes Their Debut from Indianapolis?

While this isn’t limited to Indianapolis, as the Pirates haven’t been shy about promoting straight from Altoona, their Triple-A affiliate seem in a better position to have a few players make their debut by the end of the year.

Ji-Hwan Bae is the obvious name, as he’s been playing well all season at Indianapolis. It would take roster move it would take to get him on the 40-man roster, which might be factoring into him remaining in Triple-A. At some point, since he must be added to the 40-man this off-season, we will likely see him get his opportunity.

Through the first couple months of the season, Mike Burrows seemed unstoppable. He earned a promotion to Indianapolis but has run into a rough patch as of late since being called up. He missed time last year with an injury, and probably won’t be rushed to the majors due to his previous low inning totals.

The Pirates have understandably been cautious with their former first round pick this year, who missed the start of the season with an oblique injury. He’s been pitching once-per-week, or every six days so far since coming back. While you don’t want to overload him, it’d be nice for them to start loosening the reigns again as we head down the final stretch.

Priester is getting good results, but the process has been sticky at times, so it’d be nice to see him get as much work as possible. He’s a prime Arizona Fall League candidate as he’s probably just now fully ramped up.

He last pitched on the 16th, so Friday would be on five day’s rest, it’d be nice to see him go ahead and get the nod to kick things off.

The Catchers Continue To Hit in Greensboro

Greensboro has two of the system’s best catching prospects, and after having to adjust to the role full-time again after Henry Davis was promoted, you can see their comfort level returning at the plate.

Since the start of June, Endy Rodriguez has a wRC+ of 136, and Abrahan Gutierrez is at 107. They’ve done this at the plate, all the while playing good defense.

You are always looking for the little improvements throughout the season. With Bradenton we have seen that in their rotation. Carlos Jimenez has emerged has a legitimate top-30 prospect in the system, Po-Yu Chen is making strides as the year has gone on and Anthony Solometo and Bubba Chandler have joined on as of late.

The talent is there, let’s see how they finish.

Williams: What it Takes to Go From the Draft to Pittsburgh

Today: From MLB Draft to the Trade Deadline

I didn’t see “Termarr debuts and leads the Pirates to the title” anywhere here. It must be a mistake.

Things I’d like to see after this all star break.
1. Bae called up and playing 2nd base and/or right field.
2. T- swags in center everyday.
3. Release VM, Yoshi, Perez.
4. Find trade partners for Jake, vogelbach, and gamel for lottery ticket type guys , and a decent top 20 prospect for Newman(he is a # draft pick and I still believe has some ery good years ahead of him with a new team).
5. Trading Quintana for someone decent.
6. Hayes finding power
7. Cruz getting his average in the 250 range.
8. Castillo and Suwinski getting to the 230 range.
9. Continued success for Keller, Brubaker, and Thompson.
10. Seeing burrows,priester , and bolton having solid starts the rest of the year.
11. Letting go shelton and Oscar and Haines and giving Andy Van slyke an offer he can’t refuse lol.

The next couple of weeks might help determine at least in my mind whether Cherington has a plan for winning anytime soon or is simply marking time and delaying again. Everyone’s been thinking that he’s kept this group of veteran players in the hope of trading at least some of them by the August 2nd deadline.

Quintana has appeared to be a sure bet to be traded at least until some of his recent struggles but does anyone seriously believe that the likes of Yoshi, VanMeter, Marisnick or even Newman, Gamel and Vogelbach will bring any significant prospects in trades? Hard for me to see it happening but good luck to him if that’s his plan.

The real question to me is what will he do once the deadline is passed and no one wanted some or all of those guys? Will any of them be more valuable to other teams during the off season? Will he finally “cut bait” release them and move on to the future or will he keep them on the roster taking up space and delaying prospect movement until next spring? Stay tuned.

Burrows has not been hit hard since moving to AAA. A lot of weak contact singles. Also, the BABIP is .393. The league average is .300. In 19 innings pitched he has 19Ks and
1 walk. Results are not as good as AA but ….

Not so easy to find playing time. Newman needs to play at least until the trade deadline.

Newman is, at best, a utility infielder. Keep him around to platoon with Cruz and spell Bae. Other than that…..

I’ve seen that written several times, but really, can he really improve his stock from a lottery ticket in this short time. If he hit 300 between now & then no GM is going to offer anything close to a true prospect

I don’t want Dominic Smith, I want a prospect.

The Mets are the ideal team to try to deal with–they’re all-in, feeling pressure from the team behind them, and have a good farm system.

They’re essentially the same player, but Vogelbach is cheaper. Why make this trade?

Nowhere near the same player, Smith is multi-dimensional and actually not a bad fielder…Vogelbach has only one skill that’s actually limited DH…

Alas, he is hurt so never mind…

I do not really like this trade much, but I would not say they are the same player. Vogelbach walks and gets on base a lot, Smith does not. Vogelbach has more home run power, Smith gets a lot of XBH, but not as much home runs. Vogelbach strikes out more than Smith. Smith will not win any gold gloves, but he can play the field ok. Vogelbach is terrible on defense. Smith can play the outfield if needed. Unlike Vogelbach, Smith’s platoon splits really have not been too bad in the past. Vogelbach is terrible against LP pitching. That said I would probably rather see them go after a couple young pitching prospects than Smith.

Smith is a better first baseman, but has much less power.

As the #1 Ji-Hwan Bae fan on this site, arguably of course, im excited to see him after the trade deadline. My man crush to see him in MLB can wait for mgmt to work thru the post prospect tryouts or whatever is occurring on the 40 man. No rush, look forward to him battling to be an allstar 2nd baseman until TJ moves him to CF in 2025🤣👍

I’m looking forward to the following (in no particular order):

1. Cruz swinging at 1st pitch fastball and hitting it in the river.
2. Bae batting lead off and hitting for the cycle in his 1st game.
3. Burrows winning his MLB debut.
4. Never having to watch JVM, Yoshi, and Michael Perez hitting in the 9th inning of a close game ever again!
5. Davis remaining healthy for entire second half of season.

-After reading the article about two days ago how the majority of the Pirate hitters are not swinging, I would like to see all of them start doing that (but yes, a Cruz missile into the river would be very nice)
-Bae deserves a shot more than most at this point. Trade or DFA JVM, Yoshi, Perez opens a spot for him and lets Delay get more playing time.
-No need to rush Burrows just yet unless he adjusts back to the hitters in AAA.
-Definitely get Davis healthy and wrapped in bubble wrap for the second half.

Burrow’s isn’t pitching poorly in Indy as much as he’s suffering from a high BABIP (near .400). His FIP is in the 2’s.

I’m not worried about Burrows.