Pirates Prospects Player of the Month for June: Matt Gorski 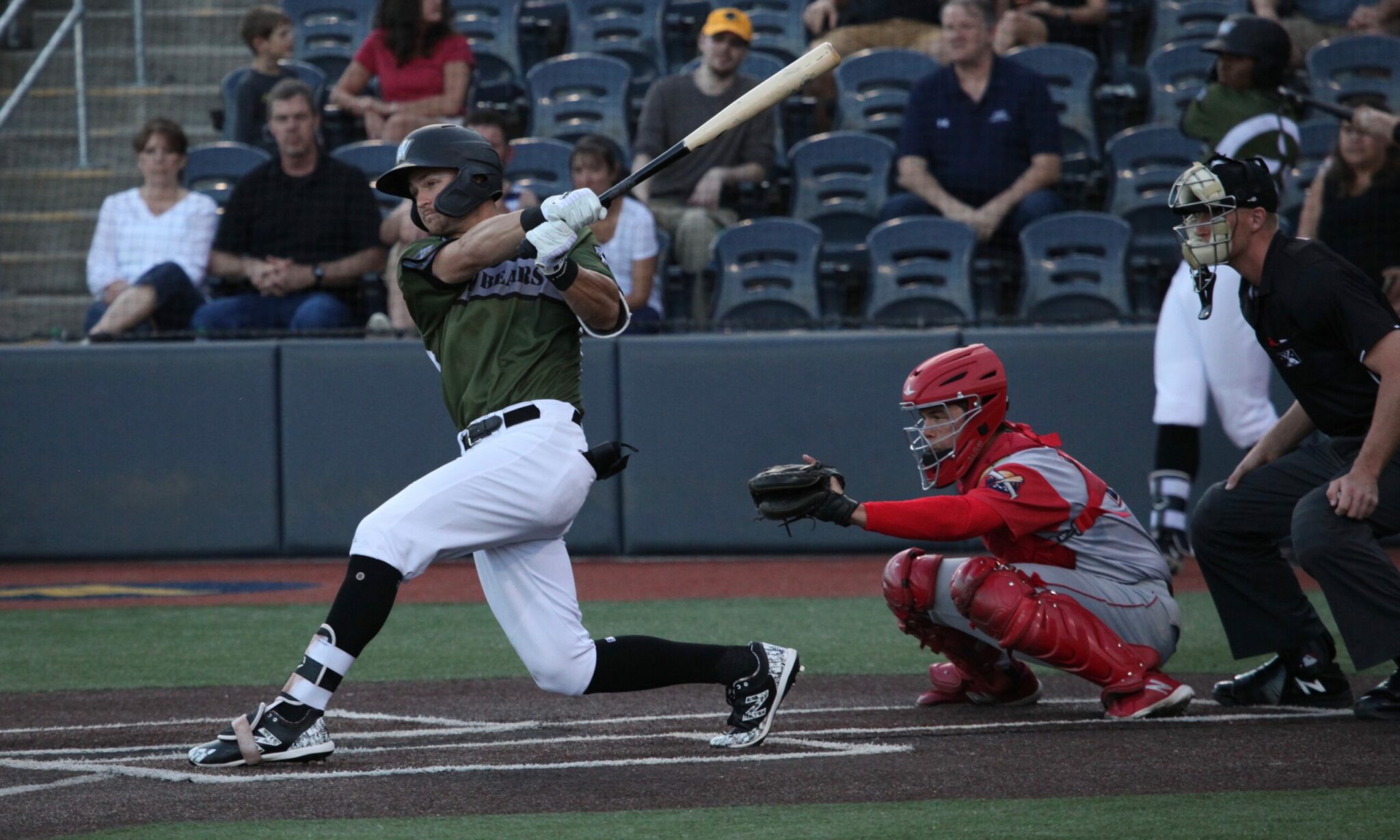 There was a split decision on the Player of the Month award, but when the dust cleared from the voting, we have a repeat winner. Matt Gorski avoided the Player of the Month winner jinx by putting up a .306/.385/.612 slash line in 97 plate appearances, connecting on five homers, while stealing six bases. He also won with different teams, earning the honors in May while spending a large majority of the month with Greensboro. He spent all of June in Altoona, and didn’t see a huge drop-off in his numbers from a hitter-friendly Greensboro ballpark, to a neutral park in Altoona. His consistency while facing tougher competition earned him the Pirates Prospects Player of the Month award for June.

Unfortunately for Gorski, he won’t have a chance to win three months in a row, because he was hurt a few days ago (before our voting, don’t get any ideas!) while slowing up to third base on a stand-up triple. It was a freak injury that is likely going to cost him much/all of the remainder of the season, since we are already more than halfway through the minor league schedule. Gorski has done enough already this year to push his prospect status, contributing huge numbers with the bat, but he’s also a good defender and a strong base runner, so there’s plenty of overall value to his game.

The unknown return time (initial estimate was several months) takes away a lot of the usual content in these articles. I would normally say something like he could see Indianapolis before the end of the year at this pace, but that seems highly unlikely now. Even if he only misses two full months and returns in September, which seems like a best case scenario, he would rehab on his return, not move up a level. Depending on his return time, we could see him head to the Arizona Fall League, where he would be able to make up for missed time, possibly along with some other Altoona players (two first round picks?)  who have missed time this year.

This injury was a tough break for Gorski, who was well on his way to a 30/30 HR/SB season, which don’t happen often in the minors. He was also on a 40-homer pace, which is another thing that doesn’t happen often. He made the great impression though, so that should help him going into next year.

Analysis: Bligh Madris probably would have ran away with the overall award if he wasn’t promoted mid-month. He was definitely trending that way, putting up a 1.146 OPS in 67 plate appearances. I think he was okay with the alternative to minor league Player of the Month. There was a split decision in the voting here, as Ji-hwan Bae benefited from being in Indianapolis for the entire month, getting 44 more plate appearances than Madris. Their numbers are far apart, even with Bae putting up a solid slash line, which is what made it a close vote. Bae had one major advantage, using his speed to go 8-for-8 in steals. It also helps his case that he’s four years younger than Madris. Bae has been having a solid season since a slow start. He has a .927 OPS in his last 52 games through the end of June. Just last week he became our first repeat winner for the Player of the Week recognition. Oneil Cruz was having a solid month before getting called up along with Madris. He had an .847 OPS in 56 plate appearances.

On the pitching side, Bryse Wilson had the best month, putting up a 2.49 ERA and 21 strikeouts in 25.1 innings. That helped him get a spot start for the Pirates on Saturday. Due to his MLB experience, it might be easy to forget that he is still just 24 years old. Cody Bolton worked through some control issues (12 walks) to post a 2.79 ERA in 19.1 innings for the month. He has a 2.89 ERA and 50 strikeouts in 46.1 innings for the season. Matt Eckelman allowed two runs in nine innings. Aaron Fletcher gave up two earned runs in 7.2 innings, which helped him see time in Pittsburgh. Austin Brice also got time with the Pirates thanks in part to two earned runs over seven innings.

Analysis: Besides Gorski, Altoona had just one hitter put up an .800 OPS. That was Aaron Shackelford, and he did it the 2022 baseball way, by swinging hard, hitting homers and not much else. His .822 OPS in 78 plate appearances came with a .229 average and nine extra-base hits out of 16 hits. Brendt Citta was the closest to the magic .800 mark, putting up a .781 OPS in 81 plate appearances.

On the pitching side, Brad Case might be the best pitcher in the system since May 15th. He had a 1.06 ERA, a 1.00 WHIP and 15 strikeouts in 17.2 innings in June. That was after finishing May with 4.1 shutout innings on two hits, no walks and six strikeouts. He has had just two bad outings this year in three months, which have skewed his overall numbers. The rest of his 16 outings show him with a 1.34 ERA, compared to 3.93 for the season. Carmen Mlodzinski posted a 2.61 ERA in 20.2 innings, with 23 strikeouts. He has a 4.47 ERA, 1.39 WHIP and 57 strikeouts in 54 innings. Noe Toribio had a 2.00 ERA in nine innings before being promoted to Indianapolis. Bear Bellomy had a 2.25 ERA in 12 innings. Tahnaj Thomas had a 2.70 ERA in 13.1 innings, with 14 strikeouts. JC Flowers put up a 3.00 ERA in 12 innings, with 13 strikeouts. Travis MacGregor gets mentioned here with an asterisk. He had a 2.35 ERA and 24 strikeouts in 15.1 innings with Altoona before his promotion to Indianapolis, where he has allowed eight runs in three innings.

Analysis:  Nick Garcia received a Player of the Month vote for his strong month of June. He made three starts at home and a start in Hickory, putting four of his five starts in ballparks that heavily favor offense. Despite that challenge, he finished with a 2.28 ERA and 27.2 innings pitched, which was the highest total for the system in June. He got there on the strength of a complete game shutout during a doubleheader at home. He had another start in which he gave up one run in six innings and another game in which he allowed one run in 5.1 frames. He now has a 3.30 ERA and a 1.12 WHIP in 62.2 innings this season, on a team that has a 5.65 ERA and a 1.55 WHIP, two numbers helped by his success.

As for other pitchers, Oliver Mateo made eight appearances, and while he pitched just 6.2 innings, he had a 2.70 ERA and 12 strikeouts. Jack Carey had a 3.07 ERA in 14.2 innings. Ricky DeVito had a 3.38 ERA and 17 strikeouts in 13.1 innings, though he was very wild with five hit batters and ten walks.

Analysis: Jase Bowen had the highest OPS for the month of June for Bradenton. He just beat out Rodolfo Nolasco by three points, so that wasn’t enough to make a decision between the two players. Bowen had 18 more plate appearances, which helps his case. His batting average was also 80 points higher, but the big difference was in the stolen bases. Nolasco was caught three times in five attempts, while Bowen went 11-for-11 in stolen bases. Through July 1st, Bowen had a .753 OPS in 69 games, with eight homers and 18 steals. He’s playing in the pitcher-friendly Florida State League, where that OPS is 76 points above league average. With a year of experience at the level already, it wouldn’t be surprising to see him move up soon. Nolasco didn’t just power his way to an .814 OPS for the month in 21 games. His .239 average hides a solid walk rate that led to a .349 OBP, along with four homers for the month. On the year he has a .649 OPS in 60 games, which also comes with 89 strikeouts in 249 plate appearances. No other Bradenton player had a .750 (or better) OPS for the month.

On the pitching side, Sergio Umana impressed with one run over 12 innings. Cristian Charle allowed two runs and struck out 12 batters in 9.1 innings. Dante Mendoza gave up two runs in nine innings and struck out 13 batters. Anthony Solometo had a 2.70 ERA and ten strikeouts in ten innings before getting hurt. Carlos Jimenez had a 3.00 ERA, 1.00 WHIP and 18 strikeouts in 18 innings. The 19-year-old right-hander has a 3.05 ERA in 41.1 innings, with 56 strikeouts.

Let’s hope whatever Mojo Gorski had discovered this year doesn’t get lost in rehab.

It’s a shame he got hurt but, I’m not jumping on the Gorski bandwagon just yet. I jumped on the Matt Fraizer bandwagon last year and look what happened.