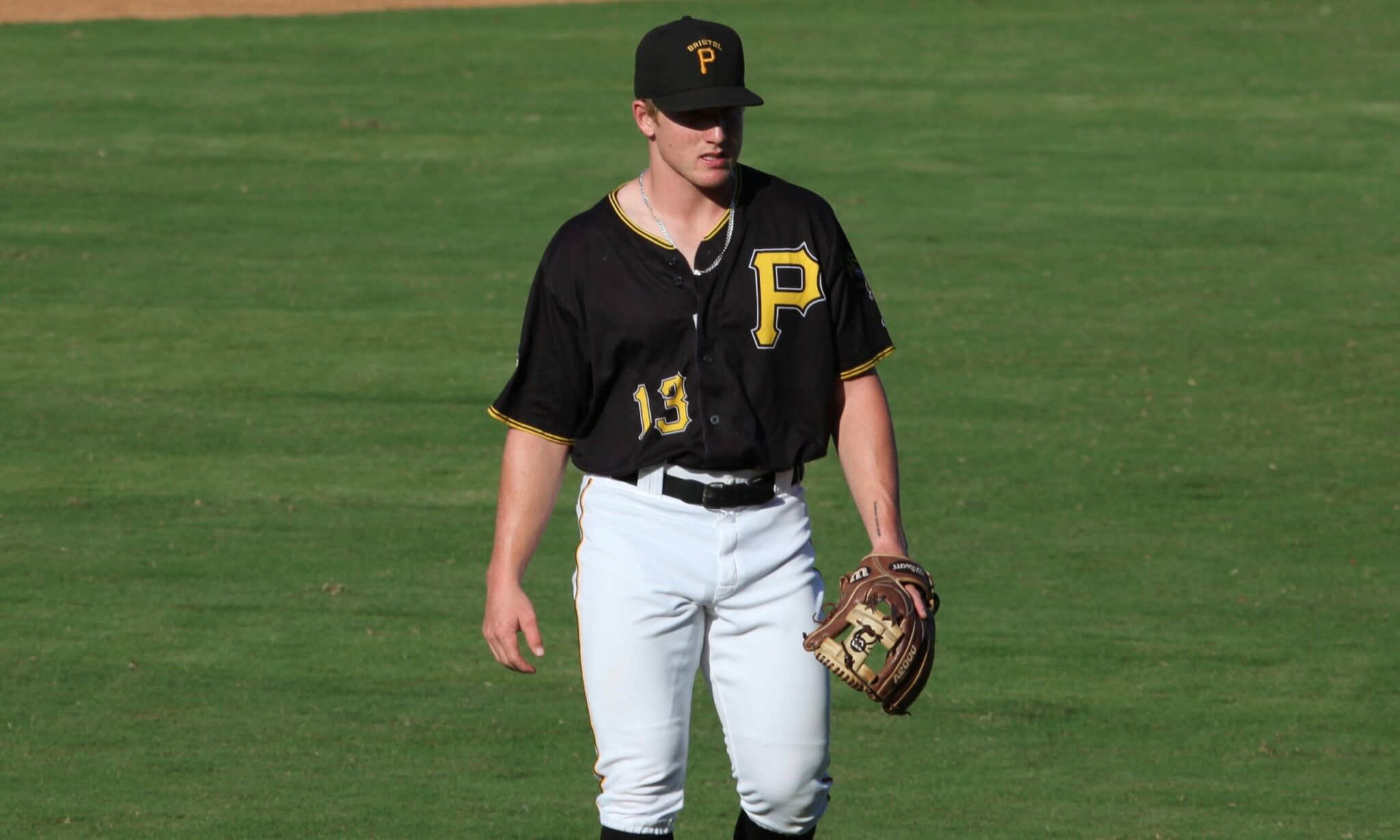 Aaron Shackelford is quietly putting together a strong season in which he’s improving his entire game as the season goes along. It seemed like he has making it into this article a lot as an honorable mention due strictly to his power, with a low average/OBP and high slugging each time. He’s been much better at not being a two-outcome player recently and it shows in comparison to his stats from last year. This past week was a nice display of his improvements, as he hit .429 with three walks and four strikeouts in 25 plate appearances. The power was still there as well, with three doubles and two homers leading to a 1.377 OPS. That hitting led to him being named as the Pirates Prospects Player of the Week for July 11-17.

Shackelford was already closing in on his 23rd birthday when he was drafted, but he hit 36 homers in college in 2019, so there was something to dream on if that could translate to pro ball. The Pirates started him in Bristol, where he added eight more homers and an .830 OPS as one of the older players in the league. He was up in High-A Greensboro when baseball returned after the lost 2020 season. There he belted 22 homers, but there were obvious red flags, besides being old for the level. He was playing in a hitter-friendly park, and he finished with a .210 average and 36:133 BB/SO ratio in 97 games. Those things all combined don’t scream legit prospect, even with the homers.

Early on this year, Shackelford looked like he was maintaining last year’s pace while moving up a level, which isn’t necessarily the worst thing. Usually you see strikeout rates increase as players move up and walk rates decrease if those numbers start out poorly. There are exceptions for players who are rushed through the system, but more experienced players tend to see downward trends. Recently, he’s improved on his average and strikeout rate and the walks have stayed the same, while showing more power than earlier.

Shackelford has a .260/.327/.523 slash line this year in 65 games, while splitting his time between first base and second base. His strikeout rate has gone from 31.6% last year, down to 27.7% this year. His 8.46% walk rate is basically the same as last year at 8.55%. The more consistent contact has led to better power and OBP numbers. Shackelford is a very strong player, batting from the left side, which would do well at PNC Park. He’s also playing a position that has no one blocking him right now, or behind him really, so he’s in a good spot to make a move. He just needs to maintain these improvements, or continuing to improve would be even better. That’s tough for someone a few months shy of 26 years old in Double-A, but not every player clicks at the same time. He’s someone to keep an eye on during the final two months of the season. If he continues doing well, we could see him get some Triple-A time, especially with the Indianapolis season running later than the other clubs.

Analysis: This was a rough week to follow Indianapolis. Their two best hitters were Hoy Park and Greg Allen, both who saw limited time. Their two best pitchers were players with a lot of MLB experience in Bryse Wilson and Jerad Eickhoff. Basically, no one with any prospect status had a good week. Allen will play for the Pirates soon, Wilson pitched for them on Sunday. It’s going to be tough for Eickhoff to get another shot, and Park could be a fill-in if the need arises. His 1.198 OPS was the fourth highest in the system last week.

Analysis: Besides Shackelford, Altoona got strong production from Fabricio Macias, who put up a 1.069 OPS in 24 plate appearances, which included him collecting five doubles. After missing the beginning of the year due to injury and starting his season back in Bradenton, he now has a .769 OPS in 40 games, with better results as he goes higher up the system. Matt Fraizer has had a rough second season in Altoona, but he improved on his results this week with a .984 OPS in 24 PAs. He had eight hits, including a double, triple and a homer. He has an .880 OPS in July, which is easily his best monthly result so far this season. Liover Peguero had an .867 OPS in 15 PAs before getting hit in the helmet ended his week early. He walked off under his own power, so that was a good sign. Connor Scott had an .801 OPS in 16 PAs. He started off strong this season, but he has a .597 OPS in his last 54 games.

On the pitching side, Altoona got a lot of good pitching last week. Quinn Priester had a strong start, throwing 5.1 shutout innings on two hits, two walks and three strikeouts. He has a 2.11 ERA and 21 strikeouts in 21.1 innings with Altoona. Luis Ortiz tossed four shutout innings in his start and struck out six batters. He has a 4.73 ERA in 78 innings this year, though it comes with a 1.18 WHIP and 84 strikeouts. JC Flowers allowed one run over 5.1 innings, but that run was unearned. He has a 2.91 ERA in 52.2 innings this year. Brad Case made two appearances including one that was three perfect innings. He tossed five shutout innings on one hit, no walks and five strikeouts. Bear Bellomy threw 4.1 scoreless on two hits, no walks and four strikeouts.

Analysis: Jared Jones won a split decision over Nick Garcia  for the top spot. Jones has had a very inconsistent season this year and this week was on the really positive side. He went six innings with one run on two hits, two walks and eight strikeouts. He has a 4.80 ERA for the season, but he doesn’t have the split you would expect with Greensboro being so hitter-friendly. He has a 4.37 ERA in 45.1 innings at home and 5.35 in 35.1 innings on the road. Jones has 102 strikeouts in 80.2 innings this year. Garcia gave up two runs over five innings in a start on Tuesday, then tossed a scoreless inning on Sunday. Combined in those six innings, he allowed six hits, with no walks and he picked up 12 strikeouts. He has a 3.54 ERA in 73.2 innings. Domingo Gonzalez had nearly the same exact line as Garcia, except he had eight strikeouts. Logan Hofmann allowed one run over 3.1 innings, but he allowed three hits and three walks.

Analysis: This week saw Bradenton get Player of the Week votes for four different players, so there were some solid weeks for the group. Jase Bowen has been here often, either winning it all, winning Bradenton, or getting an honorable mention. This week he won Bradenton with a 1.017 OPS in 24 PAs, with a double, triple and a homer. He has a .770 OPS for the season, but also has three months with at least an .817 OPS. His May slump dropped him under .800 for the season. He has ten homers and 20 steals. Juan Jerez edged out Bowen for the OPS lead with his 1.036 mark, but Jerez had just 19 plate appearances. He went 6-for-16 with a double, triple and three walks. No one else who saw somewhat regular time reached a .650 OPS last week for Bradenton, so their offense was a two-man show.

On the pitching side, Anthony Solometo and Po-Yu Chen each got a vote for Bradenton’s Player of the Week. Solometo was perfect for four innings, picking up six strikeouts. He has a 3.26 ERA and 23 strikeouts in 19.1 innings. Chen went six shutout innings in his start on five hits, one walk and five strikeouts. He’s been inconsistent this year, but it’s usually one bad inning every other start that skews the rest of his stats. He has thrown shutout ball in 1/3 of his 15 starts, but he has a 4.84 ERA. Carlos Jimenez was right there between the other two with his five shutout innings on Sunday. He has a 3.40 ERA in 50.1 innings, with 70 strikeouts. Sergio Umana pitched twice in relief and combined for 4.1 scoreless. He has an 0.96 ERA in 28 innings, with an 0.82 WHIP and opponents have a .459 OPS against him. Valentin Linarez allowed one run over 4.1 innings and struck out six batters.

I’ve been to a handful of Curve games this year and he always seemed to make loud contact. Is this a guy we can get excited for?

Much deserved for Shack Attack