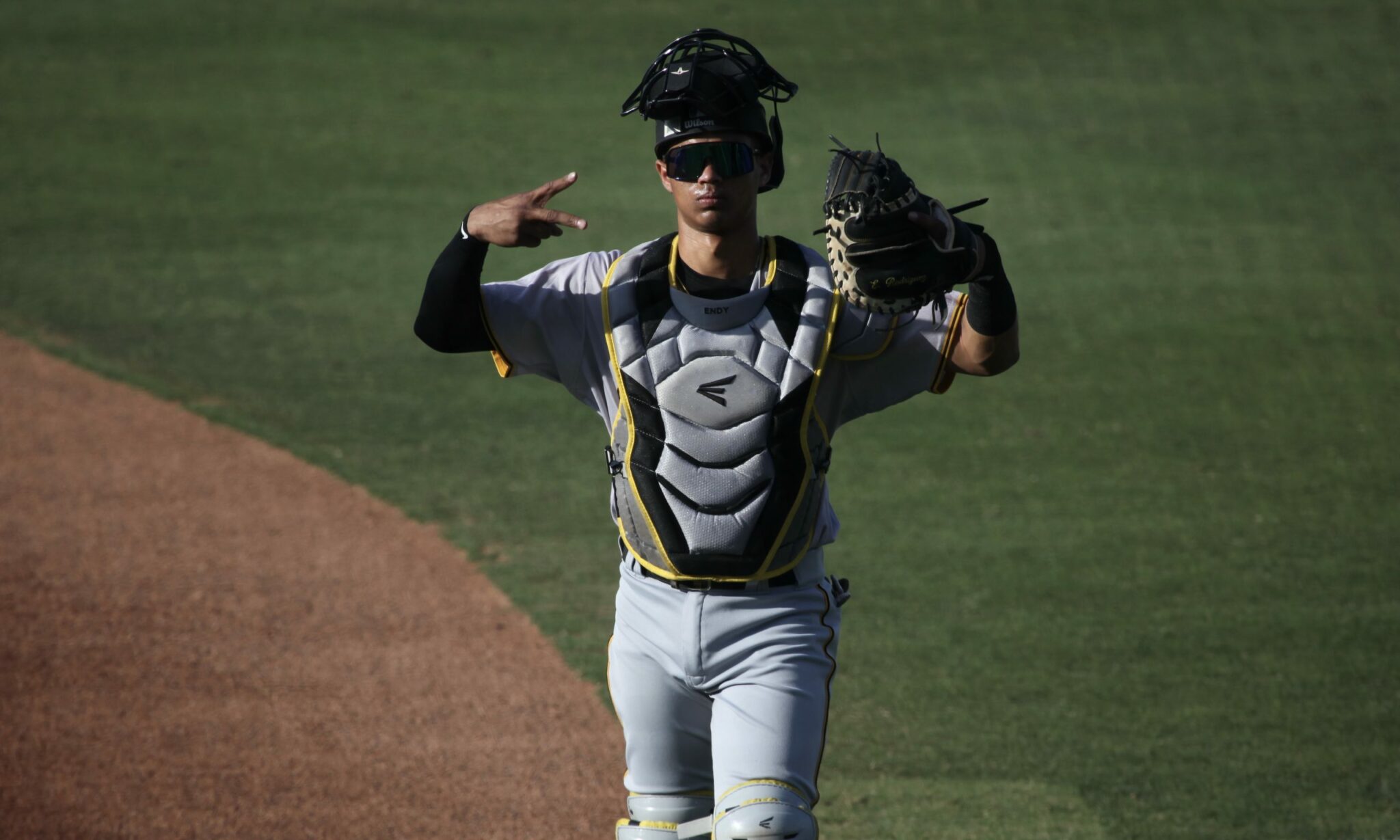 Endy Rodriguez had the highest OPS in the Pittsburgh Pirates system last week among all players who weren’t on rehab assignments (see Indianapolis below). Among that group, he had the second highest average, third highest OBP and the highest slugging percentage. He had eight hits in 17 at-bats, including two doubles and a home run. That stick work was enough to get him named as the Pirates Prospect Player of the Week.

Rodriguez came into this season with high hopes from fans. He was almost the unanimous choice for the seventh ranked prospect in the system, right behind a group of six players who collectively got a lot of top 100 prospects mentions. Most places had six Pirates in their top 100 prospects, then Rodriguez was the first player outside of that group. We have just passed the halfway point of the season and he’s having a so-so season, which is being helped a little by his hitter-friendly home. Perhaps it’s the high expectations that keeps him from getting more attention, or maybe it’s the slow April. The 22-year-old catcher/utility fielder has put up some nice numbers since the calendar turned to May.

Rodriguez had a .652 OPS in 18 April games. In his last 47 games, (May 1st through July 3rd), he has a .288/.390/.506 slash line in 190 plate appearances. So he’s been putting up the numbers you want to see for over two months now. I mentioned that the hitter-friendly park also skews the thinking a bit, because you expect players in Greensboro to put up bigger numbers than any of the other three full-season parks. His OPS has seen a 52-point bump at home over the road, but a .793 road OPS is pretty strong for a league that averages a .730 OPS (with Greensboro numbers helping that out a bit). You also have to remember that he turned 22 years old in late May, so he’s younger than league average. Throw in the fact that he has made 11+ starts at catcher, left field and second base, while also seeing a little first base time, and maybe he actually is living up to expectations, he’s just not exceeding them with his .821 OPS.

I don’t think at this point in the season that Rodriguez will move up to Altoona this year, at least not any time soon. That’s just a guess based on the fact that it doesn’t look like Henry Davis is going anywhere for at least some time, and Blake Sabol still needs time behind the plate if that’s going to be a legit position going forward. I’m assuming that they want Rodriguez to continue catcher more often than not, so Greensboro seems like the perfect place for him right now. If he’s going to be a true utility type, then he doesn’t need to be rushed through the minors as well. The Pirates already have enough young big league players learning on the job already, they don’t need any more.

Rodriguez came into the year looking like the potential backup to Davis in the majors, while also seeing time elsewhere to get more at-bats. He appears to still be on that predicted path.

Analysis: Cal Mitchell did not put up great stats in his first run through the majors, but he didn’t look over-matched either. He was the best hitter on Indianapolis when he was called up, and he picked up where he left off, putting up a 1.059 OPS in 17 plate appearances. He has an .885 OPS in 38 games for Indianapolis this year. It was a strong week for Indianapolis, though a lot of the success came from rehab players. Yoshi Tsutsugo had a 1.424 OPS and ten RBIs in five games. Kevin Newman had a .976 OPS in 20 plate appearances. Ben Gamel had a .789 OPS in 25 plate appearances. Rodolfo Castro kept Mitchell from a unanimous win here by putting up a .969 OPS in 21 plate appearances, connecting on two homers. He’s hitting just .220 in 51 games with Indianapolis, but he has a decent .741 OPS that is just a few points below league average.

Cam Alldred had a strong week in two multi-inning relief appearances, with no earned runs and five strikeouts in five innings. Cody Bolton, Joe Jacques and Eric Stout each allowed one run over three innings. No one else really stood out. It wasn’t a great week for Indianapolis pitching.

Analysis: Carmen Mlodzinski has been pitching well recently after a rough start to his season, while also missing some brief time. He gave up one run over six innings in his start last week, while striking out eight batters. He had a 5.13 ERA after his appearance on May 31st. Since then he has put up a 2.61 ERA and 23 strikeouts in 20.2 innings. Aaron Shortridge had a terrific performance, tossing four no-hit/shutout innings in his second start with the Curve. Brad Case allowed one run over four innings in an extended relief outing. Since his appearance on May 15th, he has a 1.07 ERA in 25.1 innings. Dillon Peters and Duane Underwood Jr each pitched three shutout innings while on rehab. Jeffrey Passantino allowed one run over 4.1 innings, while Tahnaj Thomas gave up one run over 3.2 innings.

On the offensive side, Altoona had one batter reach the magic .800 OPS mark. Aaron Shackelford finished with exactly an .800 OPS, going 5-for-15 with no walks and two doubles. Not his typical week, as he usually powers his way to a spot here. The second best mark was Jared Triolo, who had a solid week. He finished with a .783 OPS in 24 plate appearances, with a double, homer, three walks and two steals.

Analysis: Besides Rodriguez, Greensboro got strong weeks from both Abrahan Gutierrez and Ernny Ordonez. Gutierrez hit .409/.500/.591 in 26 plate appearances, with a double, homer and four walks. He has a .736 OPS in 63 games. Ordonez put up a 1.064 OPS in 22 plate appearances, with two homers and eight RBIs. He is hitting just .225 with seven walks this year, but 11 homers puts him at a .777 OPS for the year.

On the pitching side, Greensboro got six shutout innings each from Sean Sullivan and Domingo Gonzalez. Sullivan did his in a start in which he had three hits, three walks and four strikeouts. Gonzalez pitched in long relief, finishing with four hits, three walks and three strikeouts. Justin Meis made two starts and gave up two runs over nine innings. He struck out eight batters, but also issued five walks.

Analysis: Rodolfo Nolasco has shown spurts of success this season, mixed with a lot of strikeouts. He had an odd week led by seven walks, which is 1/4 of his season total. Even with this strong week, he has a .212 average and a .661 OPS, with 91 strikeouts in 257 plate appearances. He hits the ball hard though when he makes contact, so if he can cut down the strikeouts, and/or continue a higher walk rate, he has big upside. Deivis Nadal had a big week, putting up a .909 OPS in 25 plate appearances, pushed by a .520 OBP. He’s a strong fielder, but the bat has been behind so far. Wyatt Hendrie had a .659 OPS in 38 games this year, after putting up an .838 OPS in 15 plate appearances. He’s a seventh round pick at 23 years old in Low-A, so his bat needs to come around quickly. Tsung-Che Cheng had a “just missed” week with a .768 OPS in 25 plate appearances, which included a homer, five walks and four steals.

Bradenton got some strong pitching this week. Sergio Umana tossed five shutout innings as a starter after spending most of the year in relief. He allowed four hits, with no walks and three strikeouts. Po-Yu Chen has struggled a bit recently, but he threw five innings of one-hit, shutout ball. He’s holding batters to a .232 BAA, with 64 strikeouts in 57.2 innings.  Cristian Charle tossed 5.1 shutout innings on two hits, no walks and seven strikeouts. He has allowed six runs all season and three came in a brief outing. In his other 17 games, he has an 0.93 ERA in 29 innings. Yoelvis Reyes made a start and a relief appearance, resulting in two runs over 6.2 innings. He had seven strikeouts, but also walked seven batters.

When we start moving guys like Mlodzinski, Nicholas, Kranick etc to the pen is when we know we’re close to competing. Guys that don’t have the best 3rd pitch would do well with a bump in velocity.

Sure, but the minors is where you keep working on that third pitch amongst many other things, very few pitchers come to pro ball with three legit pitches.