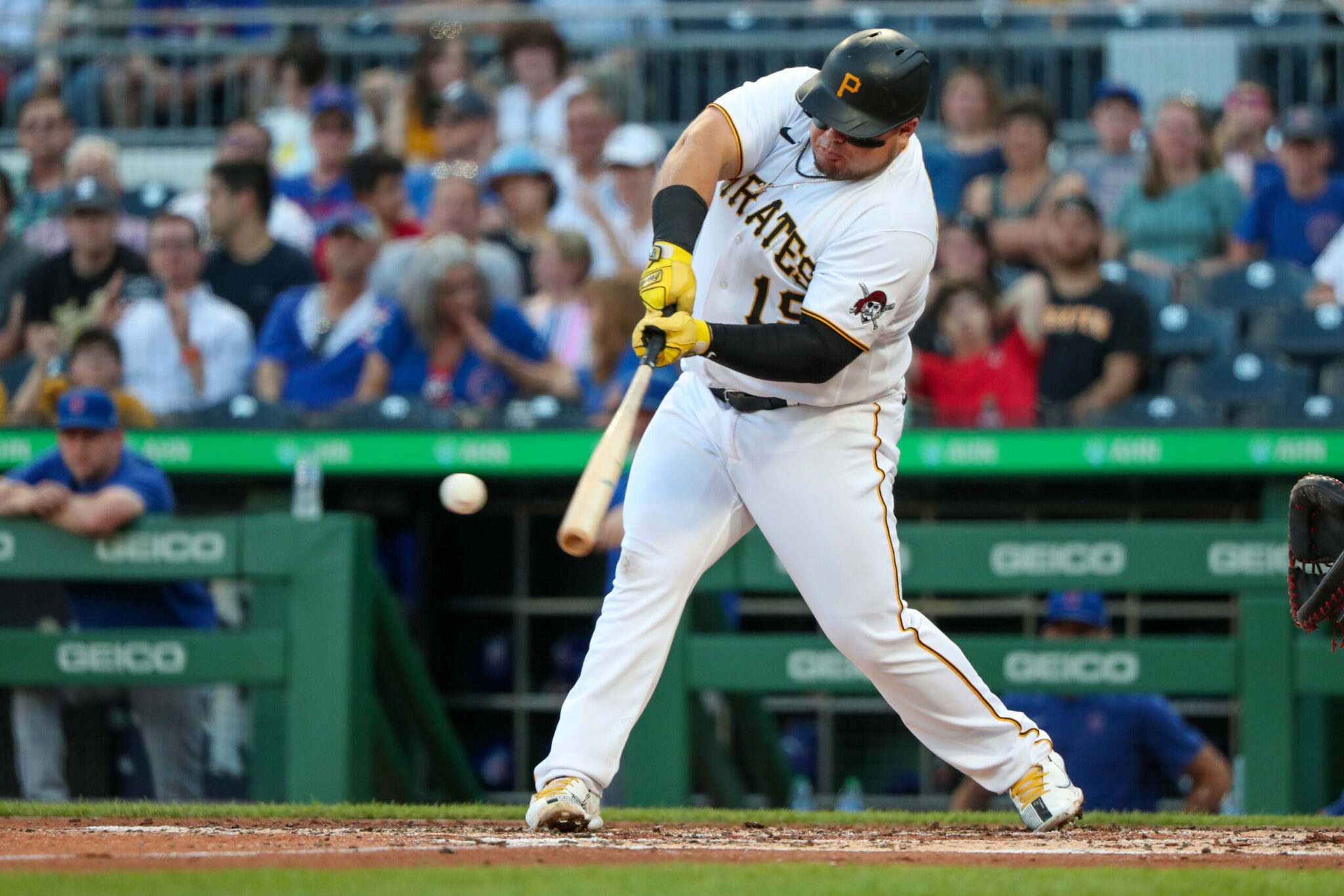 Vogelbach from Pirates acquired for Holderman

The Pirates are trading two full years of control with Vogelbach for six full seasons of control for Holderman, who will be short of a full year of service time at the end of this season. Both players are at 0.5 WAR this season according to Baseball-Reference.

Greg Allen has joined the Pirates to take the spot of Vogelbach today. They will need to make another move to get Holderman on the 26-man roster once he reports. Allen was on the 60-day IL, so to open up a 40-man roster spot, Michael Perez has been designated for assignment. Perez was originally in the starting lineup for Indianapolis today. Allen has been injured all season, so he will be making his Pirates debut.

i know the team’s line is that holderman is only being held down because the inn is full till the deadline, but just for the record, does X amount of time in the minors this year accomplish anything controlwise or super2wise? Cc: Ethan

Overall, it just feels pretty shitty that this guy would immediately be one of their best relievers, and he isn’t earning his MLB wage. Just a weird first impression to give a guy.

Must feel really weird to be good enough for the NY Mets but not the Pittsburgh Pirates.

Also, i’m contractually obligated to give an opinion on the trade.

It’s fine as long as they find a bopper as good as or better than Vogelbach this offseason, and also try to win.

i’m no Ethan, but it seems to me like he spent 1.5 months in the minors to start the year, and then another ~10 days from late june into july.

i think another 10-15 days or so clears him of the likely super 2 deadline.

They make it so awfully hard to not be suspicious of every single demotion. i’m tired of having to think like this.

Vogelback did well for the Pirates, and fills one of the only voids in the Mets lineup – LH DH.

Colin Holderman has that upper 90’s FB and an excellent Slider, and they account for about 93% of the pitches he has thrown for the Mets. Added to Bednar and De Los Santos, the Pirates will be very strong in the last 3 innings of a game. No reason to keep Stratton.

This, combined with cheringtons comments regarding the position moving forward, have to be music to Mason Martin’s ears. I hope he gets the chance

he’s been utterly awful this year. why would you want this lol

MM won’t even be on the 40 man by September. This guy isn’t a prospect

Well perhaps. But players who strike out nearly 40% of the time in the minors tend not to do well in MLB.

Man if you think some of our current hitters are bad, martin would K probably 45% up here

So you’d rather yoshi get the at bats? Not saying he’s the answer but would like to see the kid get a shot. Even if just to get a taste and a mental jolt

Good trade…getting anything for Vogelbach is a good trade. Now filling his spot with another veteran cast-off like Allen instead of Bae, is typical Pirates stupidity.

I thought Allen looked the part in the spring. Wasn’t for injury he made the team. We probably never even see JS if he didn’t get hurt

Ok, this is wetting the appetite to see what we get for Gamel. Encouraging.

Gamel hasn’t done anything this season, so what we get for Gamel is dependant on what he does the next 2 weeks

That’s the definition of “clutch hitting”. A playoff team(s) will want him.

Great name for a middle reliever.

6’7″ , could be a 3&D wing on the off-season basketball team! Sincerely doubt they still do that.

Going to miss them facial expressions, really entertaining. Nice to see the Pirates make a trade close to the deadline for an MLB ready player. Much needed bullpen help.

excited to see what Greg Allen can do

Really?? Why? Why do most Pirates fans have such low expectations? Why does a veteran cast-off like Allen excite you? I assume Alford excited you last year?

That said , Vogey was fun & I hope he does well in NY

He has to be pinching himself. His personality will EAT up NY, NY. ﻿

I enjoyed Vogelbach, and I wouldn’t have minded keeping him around at least through his option year, but to me this is such a superior return you have to do it.

Really don’t want to get ahead of myself, but with this addition you can start to see a competent pen – rather than the cobbled-together-from-castoffs ilk we’ve seen the last few years – taking shape. Which I’m reading as an actual intent to compete in 2023.

Yeah, I’m getting ahead of myself. But nice move, BC.

I couldn’t agree more. I really believe that this team is a good bullpen away from competing for a playoff spot next year. Hopefully this is the beginning of that process. They also need a first baseman and catcher for next year, but bullpen is by far the most important need IMO

I’m not sure so sure you’re getting ahead of yourself. Building a bullpen is often a signal that a GM thinks that a return to competition may be near.

The orioles are riding a very average lineup and rotation with a stellar bullpen to .500, i think we could be right around there next year with even just 1-2 better arms

Would’ve been nice to keep Vogey. But this is exactly the type of return we need. Young pitcher with some upside and years of control.

Last edited 2 months ago by hoptown
1

Not that I care, as long as it isn’t Yerry, but I wonder who gets booted from the bullpen.

Stratton or Peters…both are horrible

Here are the candidates (other than Bednar and Crowe) and the number of options they have:

My heart says Stratton but my head says of course it’ll be Yerry. Or one of the other guys gets a splinter and they kick the can 15 days down the road.

Dejong is injured, so no one?

This looks like a positive trade. Without doing much research yet, Holderman appears to be someone that has dealt with injuries quite a bit, throwing more than 37 IP once, since being drafted in 2016.

So this is the first year he’s really been healthy over an extended period (assuming at this point), and results so far are very interesting. Which, he was on IL for shoulder impingement just a month ago.

If he can stay healthy and maintain those current numbers it will be a GREAT trade. Need three more just like it.

Thanks Vogey. Glad we got to see your first career triple. Glad you survived the trip around the bases!

an interesting trade. i can dig it, i guess

Certainly not a lot of miles on this guy’s arm. He is 26 and has exceeded 40 innings pitched exactly once.

I like this a lot. We needed bullpen arms to take the load of Bednar and Crowe and to start building for next year; Holderman sounds like a good one (and a good name for a reliever).

Needed help in the bullpen much more than they needed Vogelbach, hope it works out for Holderman

Going from the Pirates to one of the top teams this year. I believe Vogy will land on his feet.

I was kinda hoping for a beat down, relatively expensive but defensively improving Dominic Smith, mets might have needed to take on yoshi…presently educating myself on the actual return….ok guys already in the show 0 service time, velo, maybe extreme righty two pitch, bucs pen is 2/3 guys short; vogey was some mad fun but they need the spot for auditions; I think the Mets stepped up to get super cheap hitting

Last edited 2 months ago by beaverjp
0

I didn’t think Vogey was worth a young reliever with good numbers. Excited for the open roster spot that hopefully will go to Cal Mitchell, Bligh Madris, or at Swag.

that’s when newman is dealt

I have given up hope that they are calling him any time soon.

On paper, this looks like a win for Pirates!

Yeah, it does. Seems like a much more serious attempt to upgrade the pen than BC has made before now. Vogelbach was OK, but he was nothing special and the Pirates need those ABs for younger guys.

Total win win along the lines you outlined. A player who can only DH from the right side is a luxury on a playoff team but a waste of space on the present Pirates. And to actually get something of value in return beyond a low level lotto pick is a win win win.