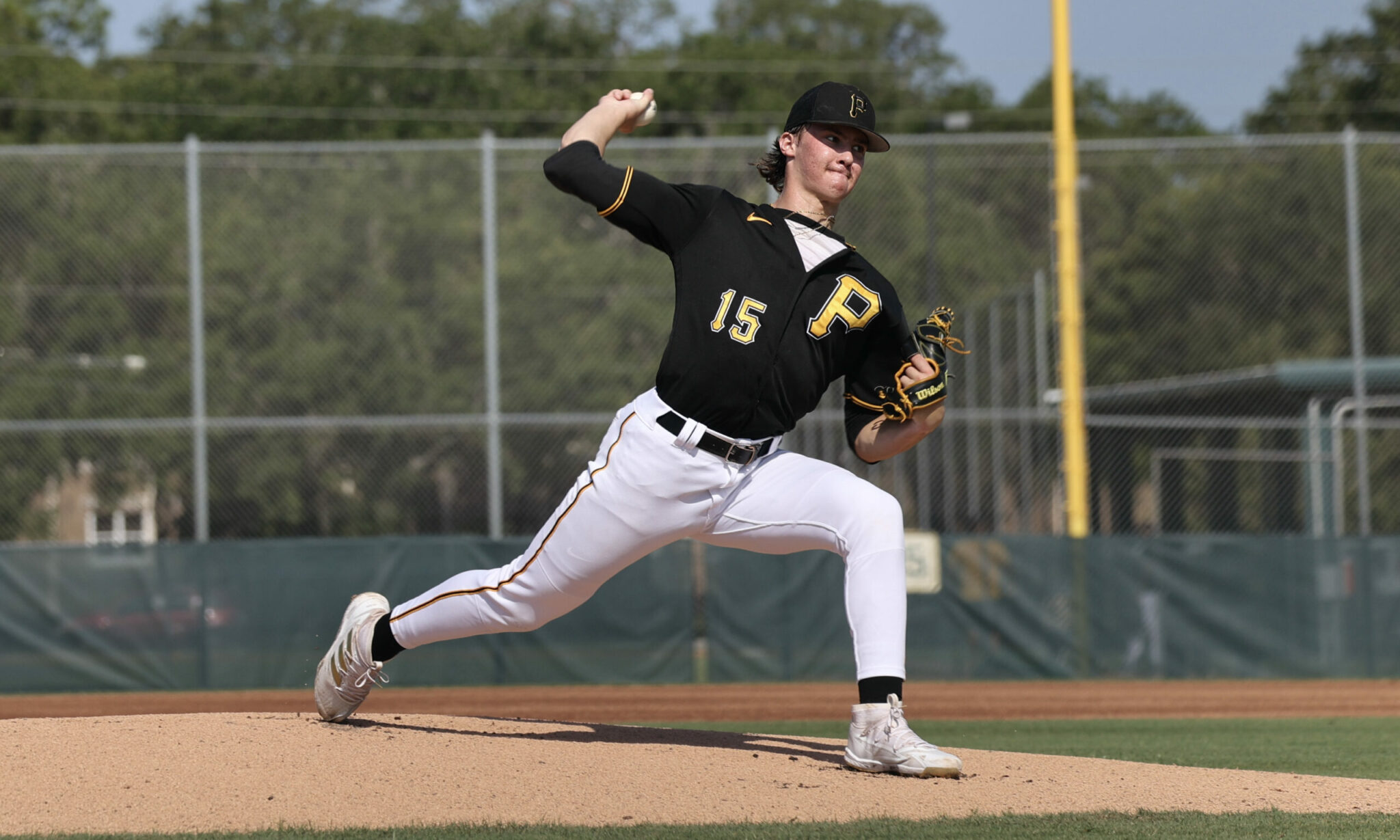 A little over a year after being drafted by the Pirates in the third round out of high school — and ultimately paid a $3 million bonus to sign — Bubba Chandler made his pitching debut for the Bradenton Marauders.

This follows 15.1 shutout innings in the Florida Complex League, which also came with some control issues. Chandler is a raw athlete who is getting his first experience exclusively as a baseball player. Aside from pitching, this includes time at the plate as a designated hitter. He had a 1.098 OPS in the FCL, and is 2-for-4 with a double so far in Bradenton.

Following his first Single-A start, our writers had some thoughts on how Chandler looked early in his career.

I had really high expectations going into seeing Chandler pitch for the first time with Bradenton. His start was a mix of good, bad, and what I expected. I’ll start with the high point and that was his early velocity. He was pumping in 97-98 MPH fastballs early on, including topping out at 99.4 MPH according to the tracker. I was not expecting that kind of velocity. The early range dropped off in the second inning, but we are still talking about a 19-year-old hitting 94-95 consistently, along with a 97 MPH pitch for a strikeout during the rough third inning. The opposing hitters were having a lot of trouble catching up to that velocity. I’m guessing that the FCL hitters, who were unable to get a run against him in six games, likely had even more trouble with the pitch.

Chandler was a two-sport star and he was being held back in the FCL despite dominating numbers. That made me think that he was getting by on raw stuff and he lacked polish. If he was polished and dominating, he probably wouldn’t have been there to begin with at the start of the FCL season. That’s basically what I saw, as he went with a fastball-heavy approach, with mixed results on his breaking ball and the seldom-used changeup needs a lot of work from the glimpses I got to see. His control was good early, then he was really off later in the game.

The bad section is more related to my high expectations due to the FCL stats and more of a question mark as to whether or not my “raw pitcher” assumption was true. He got hit pretty hard in the third inning and it looked like he couldn’t slow down the game to stop the rally. It could have been worse than four runs over 2.2, since he left with the bases loaded. Chandler has been described as a competitor on the mound, and there were probably some nerves associated with his first full-season game, but he could really stand to be a bit more under control out there. His control and tempo on the mound got a lot worse as the game started to spiral. That could easily just be a first-game thing, but it’s something to keep an eye on. He wasn’t getting hit at all this year, so he didn’t have to deal with it.

Overall when you remove the expectations, it was a really nice look from a teenager lacking significant mound time. That velocity should maintain throughout the start as he gets older and continues to get stronger. There were definitely makings of a strong secondary pitch, and I’d say that there were three that looked really nice. If he can do that consistently along with the strong fastball velocity, then the sky is the limit. Improving the changeup, and adding it in more often too, will be important throughout the rest of this year. Controlling the game instead of letting the game control him, will be key for his future. I’m looking forward to seeing him more this year to see if he improves as the season goes along.

Bubba Chandler: “At the end of the day this is an elite competitor”

I’ve seen Chandler pitching and hitting multiple times now. He’s definitely one of the best athletes in the system, but he’s also not as raw as I expected. His command on the mound is reasonably good for his experience level — he’ll just have stretches where he seems to be overthrowing and the fastball will ride high. His velocity also will fade a bit after an inning or two, but it’s still very good. (No accessible radar gun at Pirate City.) FCL hitters weren’t a challenge for him, which is obvious from no runs and three hits in 15.1 IP. They couldn’t catch up with his fastball and couldn’t do anything at all with the breaking ball. Full-season ball will be harder, as he already found out, but it has to help for him to face hitters who can actually put the bat on a 96-mph fastball.

It’s the same at the plate. He’s not swinging wildly, which we can see from seven whiffs in 40 plate appearances. He had 50% more walks than strikeouts in the FCL; it looked like the pitchers decided they didn’t want any part of him, as he walked three times in each of his last two DH games there. The power is real. The last time I saw him, he hit two long drives that were caught and then hit a grand slam. The greater challenge in full-season ball should help at the plate as well as on the mound.

Chandler looked almost exactly as you would expect a 19-year-old in his first pro season to look in his first bit of action in Single-A. Watching him throw the fastball, you can easily see why he was striking out Complex League hitters with such ease leading up to his promotion.

The fastball was electric, had good spin and missed plenty of bats. He had 10 walks in 15 1/3 FCL innings, and you saw some of the issues with the control, especially later in the game. That’s not really anything to be too concerned with, part of the naturally development of a young pitcher. The slider had some good movement on it, enough to get some swinging strikes, but is still a raw pitch overall.

Overall, there was enough there to see why he was so highly touted going into the draft last year. He has, not surprising, some things he has to fine tune in his game. His raw talent is already starting to shine through and help him have success very early in his career.

So I guess he is human after all. Still seems to have unlimited potential. Time is on his side. Could he be the next pirate super star? I frilly hope so.

Not sure if he’s inspired by Ohtani or burdened by his unique skill set? I know us fans are all dreaming of our team having a homegrown two-way Superstar though.

I know I need to temper my enthusiasm for his future…but it’s just so damn hard!

Clearly the FCL was not a huge challenge for him, so I really dont mind him going out there and struggling a bit. He needs to learn how to dominate as well as how to grind when things arent going his way. He will only get better playing good competition and this seems like a great place for him to do that

Exciting kid to watch! If he was the Flash, he could pitch and hit all by himself.

I would think being a hitter would actually be helpful – kinda like a two sport athlete, you would have a natural distraction if you are struggling and less likely to burnout on one side or the other.

Last edited 2 months ago by clemo83
0

Unless you’re struggling at both.

It’s not an either/or type thing. He can make more…