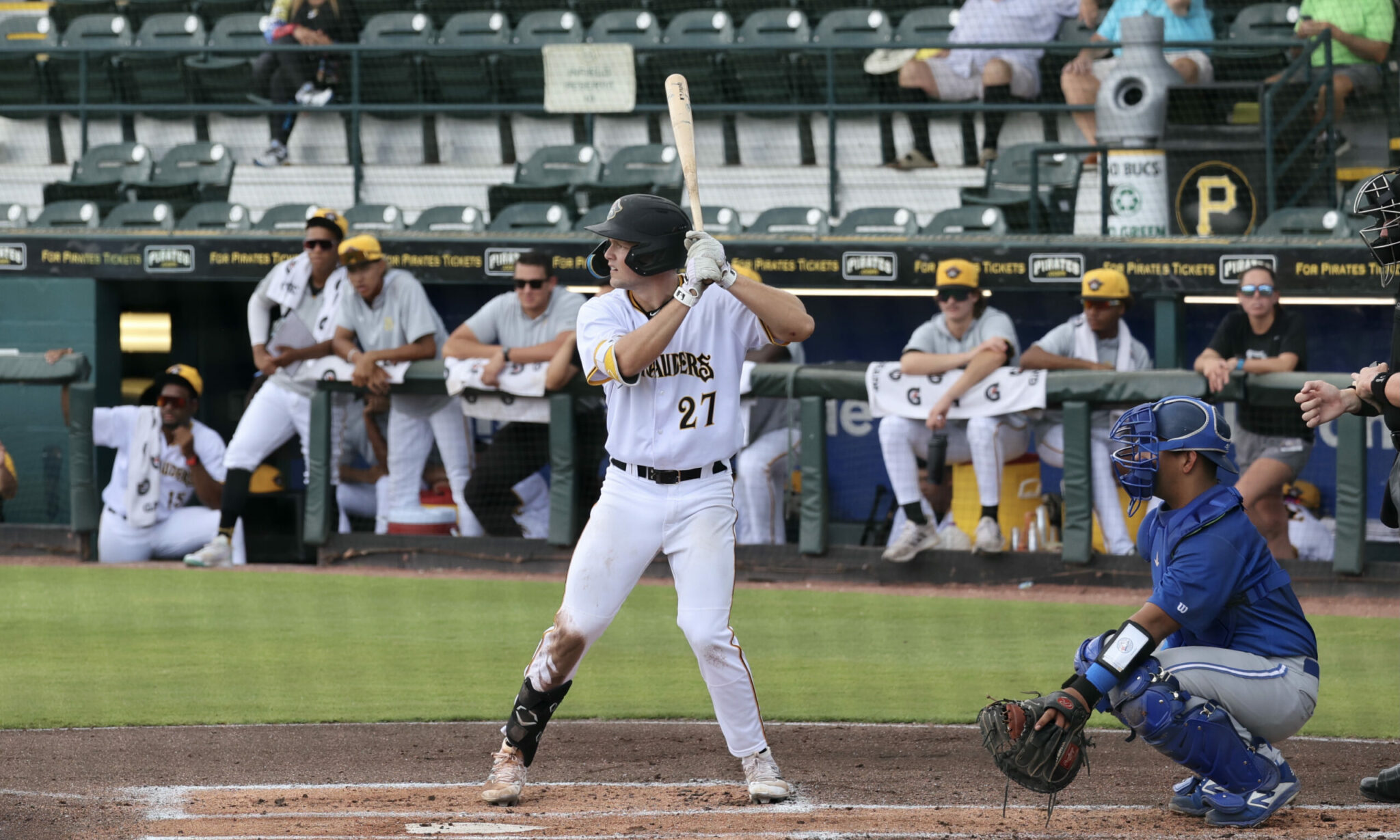 This is our fourth look at the progress of the 2022 draft picks of the Pittsburgh Pirates. A lot of players got into action for the first time two weeks, so the report was filled with the debuts of players and not much else. Two other players made their debuts last week, and the others who were already playing, started to see regular action. This particular Draft Report doesn’t have as much info because not every player who saw action in the FCL moved up to Bradenton when that season ended on Tuesday. All 11 players listed below have been updated, and no one new joined in this week.

Here’s a look at each 2022 draft pick who has appeared in a game this season. They are sorted by draft round.

Termarr Johnson (1st round) – The fourth overall pick in the draft is off to a slow start in the extremely early stages of his pro career. He hit .130/.310/.217 in nine games with the FCL Pirates, then joined Bradenton this week. In three games, he is 1-for-9 with an infield single and an RBI. Not to jinx him, but he has handled all 36 chances in the field without an error. He’s the youngest player (by six months) in the history of the Bradenton Marauders. Obviously when they were a High-A team, it was a bigger jump, but they pulled fillers from Pirate City all of the time when they needed a short replacement, so there were some young players on the team before 2021. Johnson left Saturday’s game early, but he was back in the lineup for Sunday’s game.

Jack Brannigan (3rd) – Brannigan was the first player to see action, and he has been at Bradenton for the longest amount of time. He has played 17 games total, including his two games with the FCL Pirates. Since joining Bradenton, he is hitting .255/.359/.418 in 64 plate appearances, with three doubles, two homers and six steals.

Tres Gonzalez (5th) – Gonzalez (pictured above) played one game with the FCL Pirates, and he’s up to 13 games with Bradenton, getting into the lineup on a daily basis. He’s hitting .348/.412/.391 with the Marauders. He had one extra-base hit, which is a triple. He also has two steals and two walks. He has struck out seven times in 54 PAs.

Derek Diamond (6th) – The right-hander made his debut with the FCL Pirates last Tuesday and tossed a scoreless inning on one hit. He pitched again on Friday and threw another shutout inning, with no hits or walks, and two strikeouts. He pitched two scoreless innings on Monday this week and allowed two hits, one walk and he struck out two batters. He has not joined Bradenton.

Cy Nielson (8th) – The lefty threw a scoreless inning in his pro debut with the FCL Pirates. He allowed two hits and had a strikeout. He then moved up to Bradenton, where he gave up three runs while recording one out in his debut. In the next two games, he threw 2.1 shutout innings with one hit, one walk and two strikeouts.

Mike Walsh (9th) – The right-hander has pitched three times, once for the FCL Pirates and twice for Bradenton. Each outing saw him give up one run in one inning of work. He has allowed four hits and two walks, while striking out two batters.

Tanner Tredaway (10th) – The outfielder played two games in the FCL before joining Bradenton last week. He’s hitting .148/.361/.185 in nine games with the Marauders. He has a double, eight walks and two steals.

Nick Cimillo (16th) – The only catcher drafted by the Pirates this year played  four games with the FCL Pirates before joining Bradenton. He has played four games with the Marauders, though two were partial games so he hasn’t batted as much as he did in the FCL. Between both stops, he is hitting .211/.318/.211 in 22 PAs.

Jaycob Deese (17th) – The right-hander pitched three games for the FCL Pirates, allowing one unearned run over four innings, on three hits, one walk and five strikeouts. He has not joined Bradenton.

Elijah Birdsong (18th) – The right-handed pitcher made four appearances for the FCL Pirates, allowing three runs on two hits and three walks, with three strikeouts in four innings. He has not joined Bradenton.

Ryan Velazquez (NDFA) – The only non-drafted free agent signing for the Pirates debuted last Tuesday with the FCL Pirates and allowed a hit and two walks in a scoreless inning. He then pitched on Friday and gave up two runs on five hits, while recording one out. He has not pitched since then.

The only position player yet to appear is 15th round pick Josiah Sightler and he won’t be playing any games this year. The other eight yet to appear in any games yet are pitchers. Not all of them will appear in games, with Hunter Barco, Michael Kennedy and Julian Bosnic all ruled out from games over the rest of the season. No word on the other five, so we will see if they start up this upcoming week. We will continue to do Sunday updates on the draft picks until the season ends, which will be later if Bradenton makes the playoffs.

I know it is VERY EARLY, but you would like to see the #4 pick in the draft get off to a better start at the plate. Meanwhile Elijah Green is hitting over .300 with 2 HRs and 9 RBIs in 43 at bats. However, to be fair, Green has also struck out 21 times in 43 at bats – that is not good. Right or wrong and good or bad, Johnson will be compared to Green for years to come – much like Swaggerty vs. Nolan Gorman….

Cody Ponce threw a no-hitter for the Nippon Ham Fighters this weekend. (No, I’m not saying we should miss him.)

Do they pretty much baby the young arms? I’m guessing they don’t want any overuse.

thanks but not much to report.

Looks good to me. Very interesting to see Selby in…

That’s not how trades are evaluated; they should only be…

It wasnt an exact exercise but thanks Anthony👍

Agreed, a team that is competitive today will value current…

I agree with the general conclusion, but when doing these…