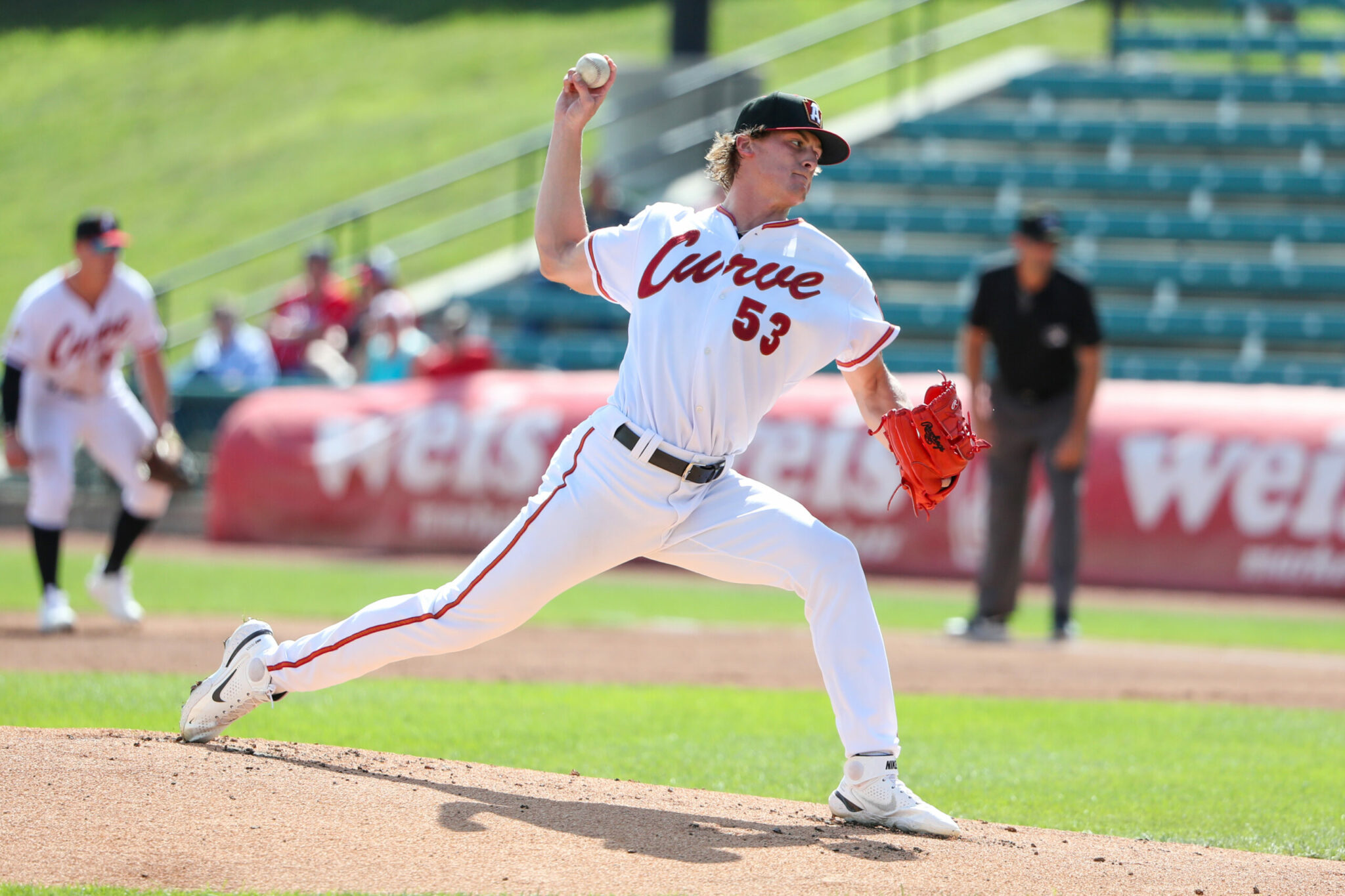 MLB Pipeline posted an updated top 30 prospects list for the Pittsburgh Pirates on Wednesday afternoon. Earlier in the day, they posted a new top 100 prospects list, so we got a sneak peek at the top five prospects for the Pirates.

The top five was already set for the Pirates list with the top 100, seeing Henry Davis, Termarr Johnson, Quinn Priester, Liover Peguero and Nick Gonzales make the list in that order. The rest of the top ten for the Pirates according to Pipeline is (in order): Endy Rodriguez, Bubba Chandler, Mike Burrows, Anthony Solometo and Thomas Harrington.

Harrington is the second 2022 draft pick to make this list. He was drafted 36th overall this year. He’s followed by fellow draft picks Hunter Barco (44th overall pick) in the 14th spot and Michael Kennedy (fourth round pick) in the 15th spot, giving the Pirates four 2022 draft picks among their new top 30, all of them in the top half of the list. The top half of the list also contains four 2021 draft picks, with Lonnie White Jr ranking 13th, to go along with Davis, Chandler and Solometo. Malcom Nunez, who was acquired at the trade deadline, joins the Pirates list in the 12th spot. He’s the only trade deadline acquisition from this yea on the list.

BA had two players graduate from their top 100 prospects list since their last update and Michael Burrows moved onto their list in the 99th spot. The Pirates now have five players on their list, just like MLB Pipeline, though there are some major differences between the lists as you can see in the linked article from yesterday.

Could still be plenty of stink on him related to his domestic violence incident. Higher bar for benefit of the doubt, outlets certainly don’t want to be seen as hyping dudes convicted of battery. Like it or not, the social desirability absolutely plays a part in the writeups and you can’t rule out subliminally in the rankings. 3 years in a row, Langenhagen at FG has cited (ok, more like just copy/pasted) the industry/evaluator squeamishness when approaching Bae. That Langerhagen hasn’t edited out that part of his eval, over 4 years after the arrest, is a pretty good signal that the jury, so to speak, is still out.

I know Keith Law thinks he should be hung up b his cajones. I don’t condone what the kid did, but doesn’t he deserve a second chance?

The thing to remember about MLB Pipeline is it’s run by MLBAM, which is as good as the league’s marketing arm. The rankings are going to tilt more heavily toward hype and recency than the independent outlets. Recent trade acquisitions (Nuñez at 12 over Gorski?!?) and high/noteworthy draft picks (Barco at 14 over Jones?!?) are overslotted as compared to guys in the system at the same age or younger and already showing it.

Everybody loves a list, and as long as you bear in mind this one has a specific angle there’s no harm in it. I just don’t take it as seriously as BA or FG.

I really enjoyed reading the athletic’s breakdowns of the 22 draft class with excerpts from each scout, would recommend the read if anyone is looking for something

I thought their article on Tahnaj Thomas was great. What some of these kids and their families go through to play ball professionally is incredible. I have a lot of respect for him and his efforts.

Care to share what the scout(s) said about our draft? I used to subscribe to The Athletic but cancelled my subscription. The articles were good, the comment sections horrible. And since I couldn’t read an article without checking comments, I realized it was better for my emotional health to cancel 😉 Maybe they do a better job moderating the comment sections now?

It wasn’t really a recap of the draft, but the scouts that identified the players and why they liked them.

Agreed – especially some of the “later” pitchers

It’s easy to nitpick any top 30. Overall this seems like a good one, but I’d have Burrows above Chandler, Bae and Gonzales closer, and Lopez well above Escotto.

The break down of where the prospects came from is interesting. Building on the reference to the last two drafts, here’s where our top talent has come from:

I think we need more IFAs, but since things didn’t start looking better in terms of signings until around ’18, I wouldn’t expect many to start showing up until the next couple of years.

It is great to have a top 30 list but will any of them make it to the show? Hopefully there are two or more superstars in the group. Only time will tell but there have been many top 30 lists over the years and most of those players never did much.

That is the key–who is the next McCutchen from this group? There are bound to be good mlb players but to contend we’ll need a couple to become stars.

In ANY Top 10 list, historically at least 6 of 10 fail to do anything in the show (think Alen Hanson, Lambo, et a.l). Some years are better, and some are worse. I was bored one day and did ours and 5-6 others using old Baseball AmErica books over a 10 year period. It was eye opening.

Probably the most logical top 30

Nah….Pirates Prospects will be the most logical.