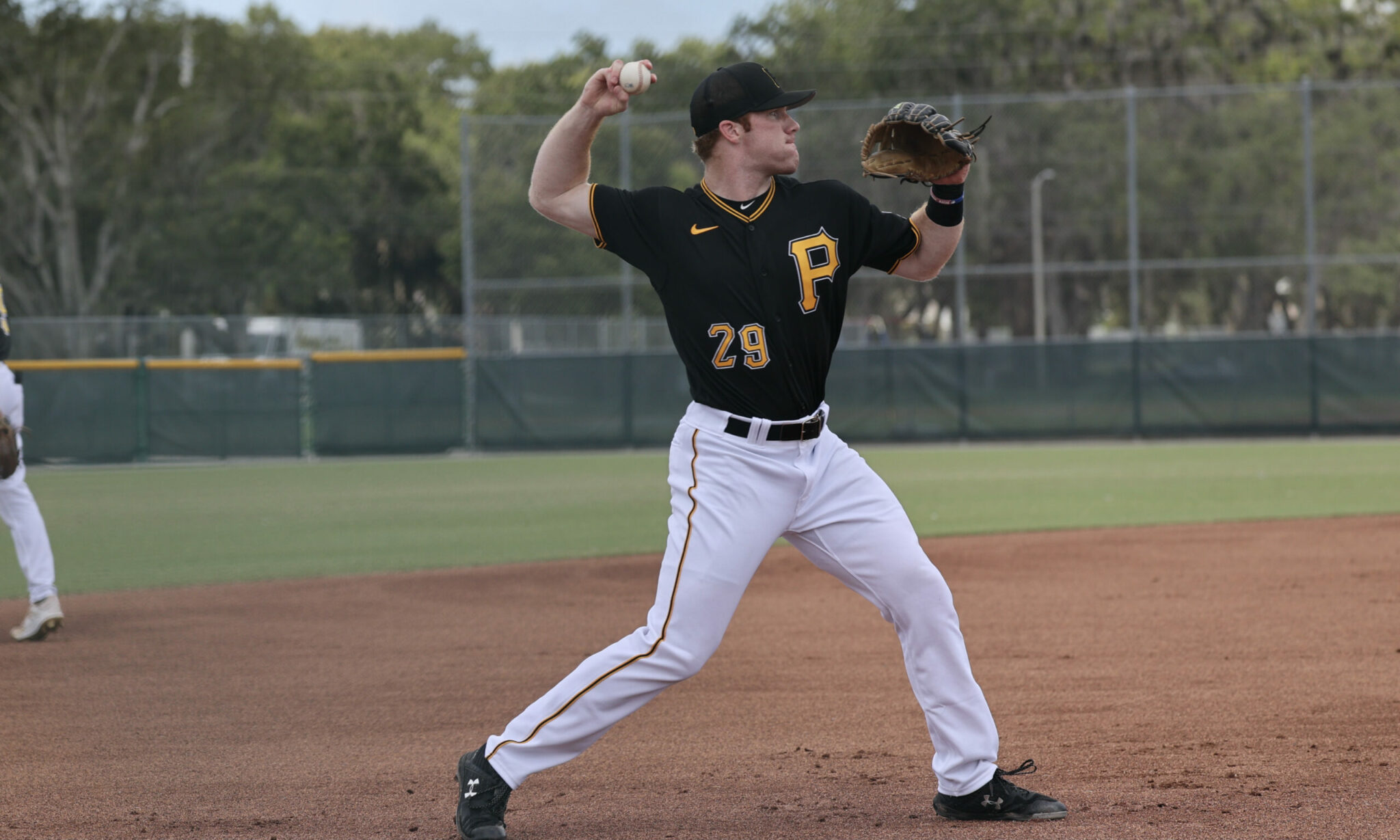 Since the draft, and the signing deadline, we haven’t heard much about the Pirates 2022 picks. Within the last couple of days, third round pick Jack Brannigan made his professional debut in the Florida Complex League.

Apparently two games at the FCL level was enough, as before Bradenton’s game on Saturday, they promoted the product of Notre Dame and he made his Single-A debut. He was the first of the draft picks to play with the full season minor league teams.

He made an immediate impact, going 2-for-4 with a home run, two runs scored, two RBI, a walk as well as two stolen bases. Not bad a bad debut for someone a lot of scouts thought had a brighter future on the mound.

That was the big question mark with Brannigan, and something that we probably won’t get an answer to for the rest of the season. Brannigan both hit and pitched (although his time on the mound was limited) in college, and was announced as a two-way player when the Pirates selected him.

He’s made it known he wants to hit, but obviously the Pirates want to try him out on the mound as well. Going by their path from last year’s draft, we probably won’t see too many pitchers from the 2022 class get into game action. For Brannigan, it’ll most likely follow Bubba Chandler’s path from 2021, where he hit but never made an appearance on the mound.

That does give him an opportunity to put the right foot forward and show the Pirates he can have a future on the mound, and he certainly put on a show on Saturday.

The Two Sides Of Quinn Priester

There’s a lot to like about Quinn Priester. He’s ultra-competitive, with the mindset of the guy that you want to hand the ball over to when the game is on the line. He has one of the best curveballs, maybe in all of the minors, and has shown evolution in his game over the years adding a sinker, slider, and shown strides in throwing a changeup recently.

He can run the fastball near the mid-90s but at times it looks really flat coming off a downward plane. He can also look very hittable at times, in a way that he did on Saturday. He allowed eight overall hits in 4 2/3 innings, and it took a couple of great defensive plays early on to keep a couple of extra runs off the board.

Priester strung together a very good month of July, but Saturday was a reminder that he is still just 21-years-old, missed the start of the season, and was more on the raw side when he was drafted back in 2019.

Sometimes the numbers don’t match how a pitcher is playing, and while this isn’t saying he hasn’t pitched well, maybe looking past some of the base numbers, we have to remind ourselves of how he is still working through things.

Nick Gonzales Returning, What Else Follows?

Mike Burrows was one of the more dominant players in the system right out the gates with Altoona. He’s recently gotten a promotion  to Indianapolis and while the numbers haven’t been there, he’s facing better competition which is just as good for his development, even if he struggles.

Gonzales moved his rehab to Bradenton on Saturday, and should find himself in Altoona soon after. When he gets back in the fold, the Curve have a few options that should be looked at to maybe get a little bit of a push competition wise, Andres Alvarez, Blake Sabol and even Jared Triolo among them.

Today: Three Afternoon Contests and a Night Game for Altoona

Yesterday: This is a Completely Different Mitch Keller

Triolo looks as good defensively as Hayes does as 3B.. He unlike Hayes can play short.

I didn’t see Priester pitch yesterday, but I did note that 7 of the 8 hits he gave up were singles. For those who saw it, we’re they more hard hit balls or bad luck, seeing-eye hits? It certainly sounds, from the article, like they were mainly hit on the nose.