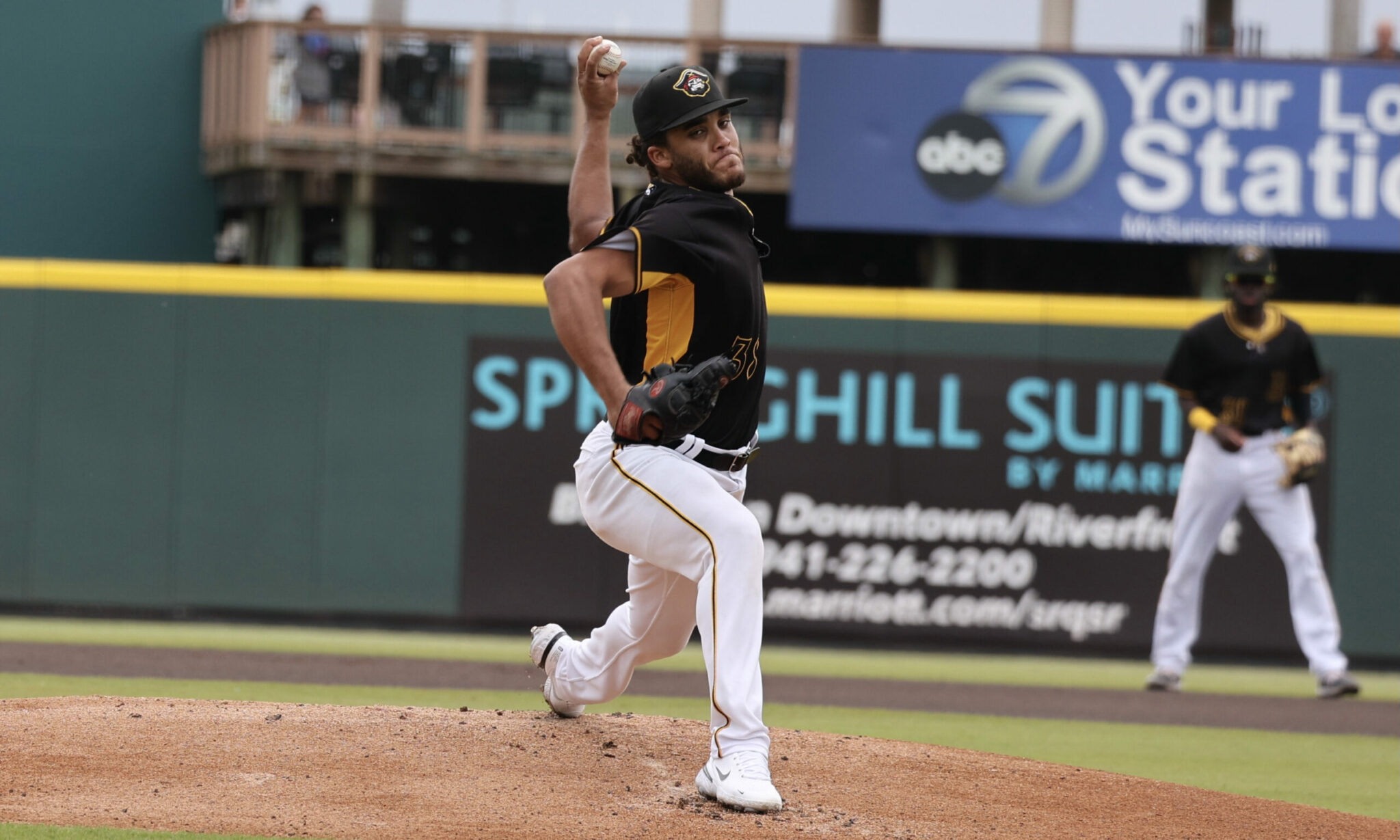 The Pirates had two of their top young pitchers on the mound in the minors on Thursday, Roansy Contreras and Quinn Priester. While they got the job done (five earned runs among 10 collective innings pitched), you can make cases they were far from their best on the night.

That happens sometimes, which also points why they are so highly regarded, their ability to still limit the damage when maybe they don’t have their best stuff.

Further down the system, the other two starting pitchers both continued to take strides in the right direction with their latest outing.

Luis Peralta was putting up some eye popping numbers early in the season, but was really struggling with his control. He was placed on the Development List on May 26, eventually making his return about a month later.

Things didn’t immediately turn around for him, throwing just 58% of his pitches for strikes in his two outings upon returning.

Since then he’s thrown 189-of-his-309 pitches in his last five outings for strikes. Maybe the most important part of that is he didn’t have to back off his stuff too much to get that added control. He’s thrown 18 2/3 innings in those five outings, but has still struck out 26 batters in that span, for a 31.3% K-rate.

The walks are down to a 9.6% rate in his last five appearances, while his overall season mark is still 14.8%.

There probably aren’t many worse ways to debut at a new level than what Justin Meis experienced. He allowed four hits, one walk and three earned runs, all without recording an out.

His next time around about the only improvement you can say was that he recorded an out (2/3 IP, 5 ER).

Starting to turn the corner a bit himself, he’s thrown 20 2/3 innings in his last four appearances, struck out 20 batters while holding a 3.48 ERA in that span.

Meis has a good fastball/slider combination that worked well for him out of the bullpen in Bradenton last year, but was shifted to the rotation for 2022. He still may be better suited as a reliever but getting extra innings of development as a starter never hurt.

The Altoona Curve’s newest catcher didn’t wait long to make an impact in the lineup, doubling his first game before hitting a home run the following day.

While the bat has obviously continued to impress, his defense has been just as good.

One overlooked thing about moving up a level as a catcher was the extra adjustments that he was going to have to make. Having to catch a whole new pitching staff isn’t something that should get overlooked, and we saw a little bit of why on Thursday.

Endy had one of his worse days behind the plate, allowing two passed balls, committed an error and allowed two stolen bases.

Rough, but can be expected for a young catcher catching a whole staff of new players for the first time. It’ll take some shaken out, and now he’s got learning points to work with.

It’s only up from here, and he’s starting to show there’s still plenty of skill for him to tap into.

Speaking of pitching prospects, I am probably in the minority as is usually the case, but I am not thrilled that the Pirates are allowing Bubba Chandler pursue being a pitcher and position player. That seems to be a recipe for disaster in the long run….how can they devote enough time to both and not compromise his development? His numbers to date – pitching and hitting – have been spotty to date and I wonder if that is working against him.

It will likely shake out in the end for him to be either a Pitcher or a hitter. There’s plenty of time for him to show us all what his future looks like. As a 19-year old in full season ball, I wouldn’t be concerned yet given the raw skills he has shown.

I say give the kid a true chance to be the next Ohtani. At least until he get to AA that is.

Peralta is one of several supposedly very talented Pirates starting pitching prospects with “great stuff”, yet that talent doesn’t seem to show up in actual performance and in the box scores. The last time I checked, Peralta had an ERA in the 5 to 6 range……if he cannot perform at an even average level in Low A, is he really a prospect? Same question for Jared Jones, who is like the poster child for this group of supposed starting pitcher prospects….at some point, you need to demonstrate you can get batters out consistently.