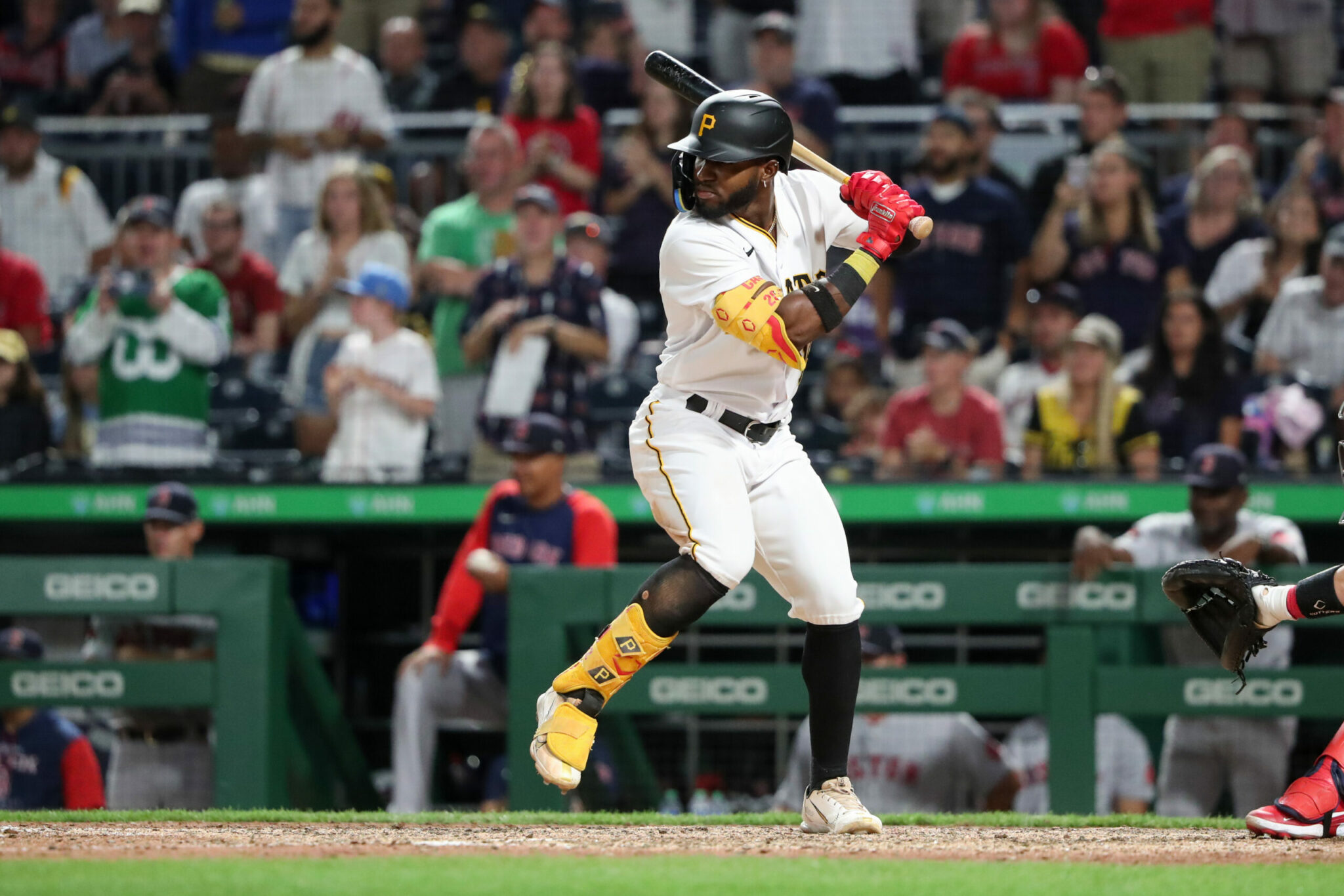 Just about everything Rodolfo Castro does on the field makes a lot of noise, not always for a good reason. He was sent back down to the minors after not running out a pop up, his first five hits were home runs, and more recently, had his phone fall out his back pocket sliding into a base.

Amidst the latest slip up, Castro has been really good at the plate. He picked up multiple hits in each of the three games against the San Francisco Giants last week, along with a total of five extra-base hits in the 11 games since returning to Pittsburgh.

The Pirates have cycled through their fair share of second basemen this year, and have some highly rated prospects in the system waiting in the wings for the opportunity.

Castro maybe provides something that any of the others that may be vying for a potential spot on the roster at the position don’t have, at least at his level, and that’s raw power. The immediate options at the major league level — Tucupita Marcano, Kevin Newman and even Diego Castillo certainly don’t with the latter the closest.

For a team that has struggled offensively this season, and sits 18th in the league in home runs, having Castro make the adjustments he has is huge, even more so if he can maintain this.

Ji-Hwan Bae is probably next in line to get an opportunity, and while he has taken great strides with his power, doesn’t nearly match up with Castro, although he may have a much more well rounded game.

Nick Gonzales and Liover Peguero are both at Double-A and have played second base this season. Gonzales has been hurt most of the season and both still have work to do on their swing before they pose any threat to the playing time of any of the players listed above.

It’s been a while since Kevin Newman has been a prospect, but his re-emergence for the Pirates has really forced himself back into the team’s picture for next year, or at the very least may have actually created some trade value. Some sort of rotation between Castro, Newman and Marcano/Bae could be a realistic look at how they open up next season if you really want to jump the gun looking at it.

Regardless, Castro has really done a great job at reshifting the perception of him based off really the last two incidents he went through with the Pirates, both negative. In doing so, he’s maybe forcing his way back into the conversation that he slammed the door in his own face earlier in the season.

He’ll have to show he can be consistent with his play, and that includes the mental lapses, but the last week and a half he’s certainly earned to the right to get an actual shot to prove himself again.

Speaking of Bae, with about a month left in the minor league season, players are starting to reach the same amount of games played, and at-bats they from a year ago.

One example Bae, who played in his second game since returning from an injury. Saturday’s game was his 85th of the season, the same amount he played in 2021. Even better, for comparisons sake at least, he has an identical amount of at-bats as well with 327.

The results? About what you had figured, after finally growing into some power in Altoona last year, he’s taken it up another level in 2022 with Indianapolis. Bae has collected six more hits, five more that went for extra-bases, and is slugging over 30 points higher than he did last year. The stolen bases have remained about the same, he has one more this year than last, and has seen an increase in his batting average by 19 points.

It’s exactly the kind of development you would hope to see out of a young player knocking on the Major League door at Triple-A.

For my money, Hayes, Cruz, Castro, and Bae would give the Pirates one helluva group to trot up to the plate and play strong defense. Castro/Bae at 2B, the other the IF Utility player. Castro is probably more capable of playing 3B/SS/2B, and I think he has already played all three positions in MLB.

Also, I would not hesitate to bring Mason Martin up at 1B.

Please BC, start to DFA some of the deadwood that has been showing up in the daily lineups – if they are what you are thinking about for 2023, start looking for a job now – I heard Texas needs somebody!

I appreciate this article as literally yesterday I was thinking that Castro isn’t getting the positive attention he deserves. I’ve become a big fan–he seems sincerely remorseful about mistakes and I don’t think there is anyone on the roster with more charisma (though there are others I’d rank right with him). It’s easy for me to forget how young he is–a year and half younger than Castillo, for example, though Bae and Marcano are right there with him. And an interesting but relevant aside, Castro and Gonzales were born in the same week back in late May of 1999.

Last edited 1 month ago by TNBucs
0

And now Castro is second to Reynolds in OPS. Obviously that may not last, but his response to adversity (even if it was by his own doing) is impressive and could serve as an example to other prospects.

On June 26, 2019, Rodolfo Castro along with Lolo Sanchez played their first game (I think) for the Bradenton Marauders, an A+ team at the time. The game took place at Roger Dean Stadium in Jupiter, Florida against the Jupiter Hammerheads. Castro hit two homers and if I recall correctly, a double. I was there and thought, wow! I don’t remember what Lolo did.

Now, if one can look past the occasional ‘stupid,’ a power-switch hitting infielder that can competently play three infield positions and relieve in the outfield, if necessary, is a very nice piece for any team. If he continues to play and hit as he has since being recalled, I’m all in, whether he’s a regular or not.

Newman’s done a nice job of late but his forays into prolonged periods hitting below the ‘Mendoza line’ make his long-term utility suspect, particularly given the plethora of Pirate middle infield prospects. Unfortunately, as much as I like him, that he continues his current course for the remainder of the season so the Pirates can maximize a return is the best we can hope for.

Just when we are ready to cut bait on Newman, he comes back and starts hitting again…He will never will hit 25 HR’s, but if he can become that contact hitter he was coming out of college and be a table setter with better than avg. defense then he would be helpful to keep around…Can play 2nd and SS, a singles/doubles hitter who runs into an occasional HR. Can steal bases etc…

Sorry. I’m out on Newman. I’m happy to see his bat come around some, but he needs to find a new home where he can be the MIFer off the bench and not block other, likely better players. Even with his really hot last week, his OBP is only .320. You can’t be a contact hitter and never take a walk if you don’t hit well over .300.

I would rather see Bae up now in his place and let SS/2B be a rotation between Cruz, Bae, and Castro (or Castillo or Marcano). With Peguero and Gonzales (and maybe Alvarez) coming next year (yes, NicK has work to do), the time to figure out what Bae, Castro, Marcano, and Castillo can be is running short.

We pretty well know what Newman is. At his best he hits .270-.280, never walks, doesn’t steal bases much, slugs little, fields well but has to bat 8th or 9th. He’s not a starter on a good team.

I like Newman, but he’s a good utility infielder for a contending team. I like seeing him play to boost his trade value, but have not desire to see him in a Pirate uniform next year. The injury this year likely hurt the ability to get a good prospect for him. Deal him during the offseason for a low-level lottery ticket and move on.

Newman is pricing himself out of a role with this team, besides you could get the same production with any of the names mentioned in this article

Yes, baseball is almost as confusing as life. Speaking of which, let me recommend The Church of Baseball, which is a memoir of the writing and directing of Bull Durham. So, it’s about life, not baseball, but I remember Durham Athletic Park fondly.

Did you go to any games at the DAP?

Perhaps we should be doing a little of what the A’s did this week and cut loose Gamel so the kids can play more often.

Unless they’re planning to bring Gamel back (I don’t think they should), I’d much rather see Swaggerty or Mitchell getting those reps. Swaggerty would bring plus defense and he’s been walking as much as striking out lately–let’s see if those skills are ready to translate to MLB. And all Mitchell has done since being sent down is put up a 1.015 OPS–it’s hard to see that he has anything to learn from facing AAA pitching (the defense might be another matter but I’d want him getting use to the PNC OF if that’s a reason for keeping him down).

Will Swaggerty or Mitchell outperform what Gamel has been doing? Probably not. Will the reps help them prepare for ’23 when Gamel should no longer be here? Definitely. And when our GM says it isn’t about wins and losses right now, then why not?

I don’t see any real outfielders who deserve a promotion. Who have I missed?

Perhaps, but there are players burning options in AAA that we should take a better look at, instead of a player that doesn’t have a spot on this team next year.

With 6ish weeks left in the season, there is plenty of time for someone like Castro (or really any of the young guys) to take a hold of their position with momentum going into next year