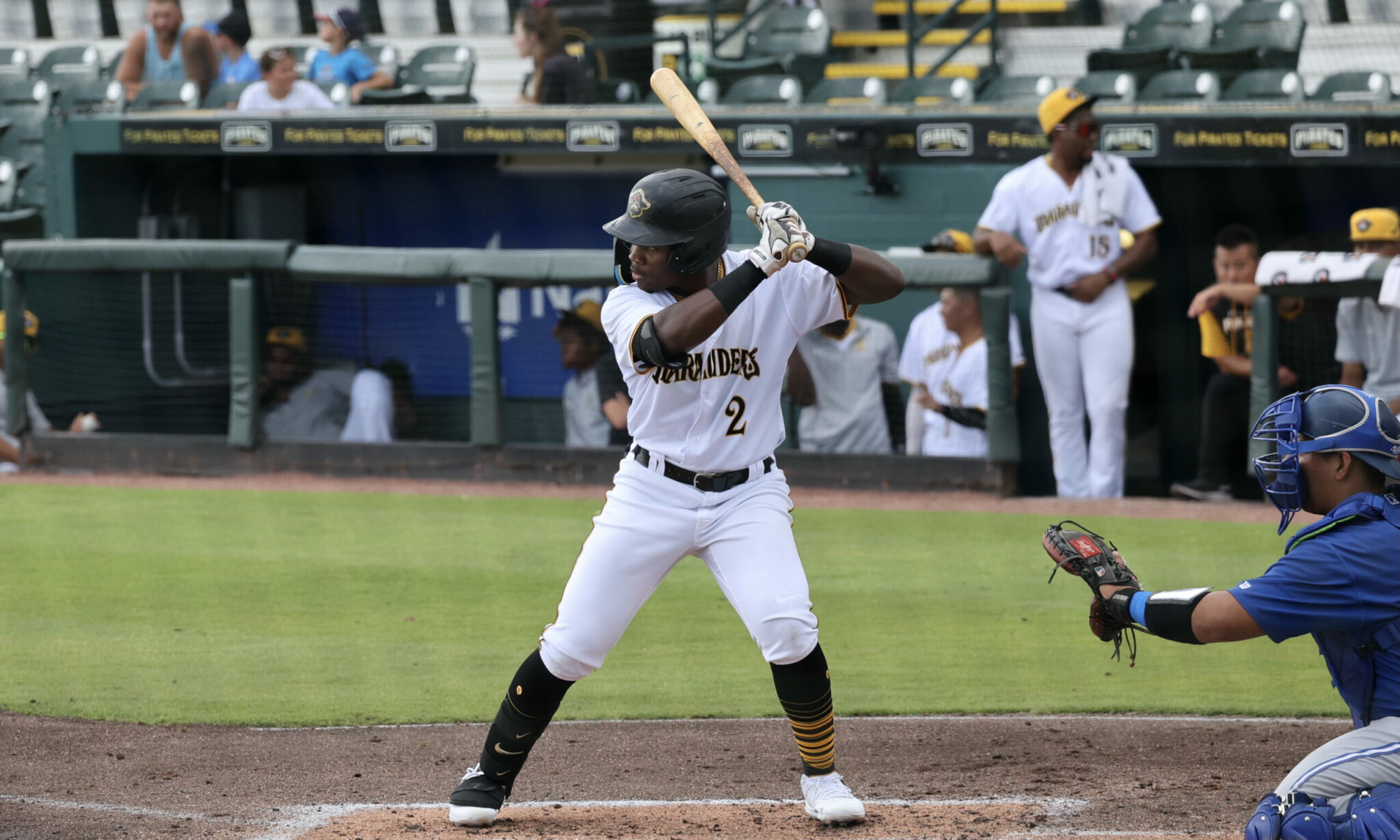 It’s been a less than ideal start to the Pirates 2022 first round pick’s professional career, and things took an even more unfortunate turn as he left Saturday night’s game before the start of the seventh inning due to an injury. Trying to beat out a grounder in the bottom of the sixth, Johnson tried to move away from the tag, and you can see how everything got awkward from there.

This is the play that ultimately forced Termarr Johnson out of the game Saturday night. Hopefully the decision was more on the precaution side #LetsGoBucs pic.twitter.com/uQvDNGp75I

He tried to come back in for the seventh inning, leaving the game during the warmups. Johnson had just one hit in nine at-bats for Bradenton, but never really looked outmatched. With so much invested in him, it will be interesting to see how the Pirates handle Johnson.

He was striking out nearly 30% of the time in the FCL, but had done so twice in 10 plate appearances in Bradenton. Just about every number you could come up with for Johnson are very much in the small sample size range.

Two lefties that were on different paths at the time of their injuries were activated from the injured list on Saturday.

Omar Cruz got off to a good start to the season pitching out the bullpen piggybacking the starter, was shifted to the rotation in May, struggled and was never able get things back on track. He posted a 3.18 ERA with 24 strikeouts (17% swinging strike rate) in 17 innings during the month of April.

Omar Cruz comes out the bullpen and absolutely mows through the inning. Strikeouts the side pic.twitter.com/jEAz96A0U1

In May and June Cruz had a 6.68 ERA with 33 strikeouts in 33 2/3 innings pitched. Cruz doesn’t have overpowering stuff, but offers one of the better changeups in the system, and a big, loopy breaking ball he can throw for strikes.

Bradenton has lost four in a row and now sit in third place in the Florida State League West division in the second half. Getting back one of their more experienced lefties could help out.

Suwinski has been a hard code to crack since heading down to Indianapolis. He’s shown the power that made him the NL rookie leader in home runs, but also the swing and miss that put him in position to be sent down to Indianapolis to figure things out. Then, the swing and miss kept getting worse to the point he had a sub-.200 batting average and was striking out nearly 50% of the time.

Not exactly a recipe to get another opportunity in the majors.

For what it’s worth, he’s struck out just once in the last three games, and has three extra-base hits in the same span. The strikeout rate is back under 40%. It’s still not good (37.6%), and truthfully it wasn’t realistic that he maintained that high of percentage, but it’s still good to see it dropping.

Suwinski showed that he has the power that he can really do some damage when he’s hot and making contact, but the strikeouts are going to continue to make him a really streaky player.

Termarr, jumping the gun a bit, but I was just never feeling it. If this guy had the best hit tool in the draft, he should be tearing these levels up. He’s got to be a .320 hitter or he’s a wasted pick. I’d have gone a different direction. He’s small. Nothing special on defense. Every hit I see is a chopper to second. I’d have taken Green- potential big bomber. No more second baseman.

I guess Omar is back to the old windup again.

Another 0-3 for Termarr. Terrible start to his career. And Nicky still doesn’t look great. I’m at the point now where I expect all of our 1st round picks to be flops. And, yes, I’m now totally open to believing that there’s a curse on this franchise.

This is what they get for drafting a second baseman with their 1st pick 2 out of 3 years. With top 10 picks no less. Even if they both pan out, it’s the least valuable position on the field. Would much rather be seeing Elijah Green mash right now.

While Green is hitting well on the surface there, he’s striking out 40% of the time.

Our number pick is injured. Our #1 +pick is striking out a lot. Check and double check.

Termarr is in the lineup today, so NBD it seems.

Of course he did because this is the Pirates fate! Someone put a curse on the Buc’s following the 1979 WS win.

Last edited 1 month ago by jon6er
2

Sorry. I left the Pgh region for a job 5 hrs away back in ’79. I have blamed myself ever since.

When can you move back?

I’ve been asked that before, lol. I love it in SC Pennsylvania. Near the ocean and 4 major cities. LOTS to do.

I guess I get the good with the bad. For a while there, I thought I had jinxed the Steelers, too.

Bad owners have been a part of the game forever. Nutting isn’t anything special in that regard.

Agree. Nor are there baseball gods. But, it’s part of the lore.

This is a recurring nightmare!

Just another notch in the belt of ‘22. What a crap year for Pirate baseball.

2023 ain’t looking much better either.

Another 1st round pick injured, NOOOO!